LISTENING TO RED by DONA MAYOORA 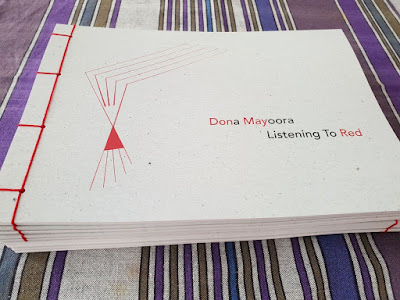 I was slowly turning the pages to Dona Mayoora’s transcendent Listening to Red, a collection of 30 visual images--here's one: 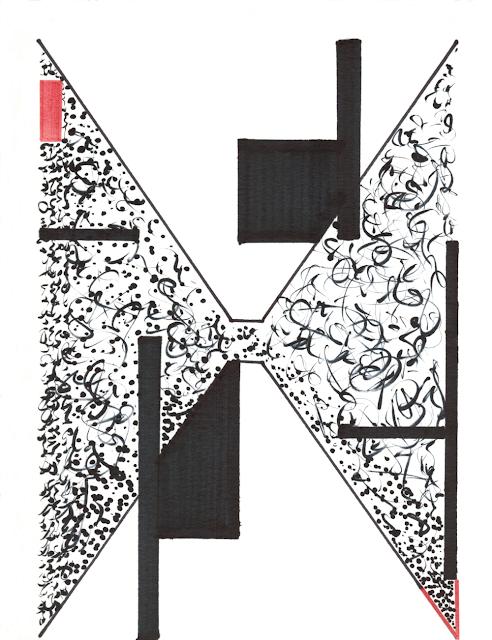 And as I continued to slowly page through the images, I began to recall an earlier effort to explore the color red through an earlier project, the MDR Poetry Generator. The Generator asked and answered, “What is red?”

I could continue but here’s the resulting poem-meditation—I am grateful to Dona Mayoora for making me hear-to-revisit this memory:

1.
I forgot how I looked directly into his eyes where irises cracked to illuminate the luster of rubies seeking their way to surface.

I forgot how, not hiding the slide of my gaze from one dime-shaped, reddened pitted mark to another, I replied, “Yes, I’ve never seen such effervescent light.”

I forgot the grandfather who willingly faced a fire, fist trembling at the indifferent sky.

2.
I forgot the grandfather who stood before the fire rushing through a legacy untouched by 300 years of Spanish colonialism.

I forgot the light burned and we never shaded our eyes.

I forgot fevers refusing to abate even when drenched with seawater.

3.
I forgot tipping Bing cherries into a blue bowl until I lost the sky to a crimson moon’s overflow.

I forgot dancing furious flamenco with vultures under a menopausal sun.

I forgot learning to appreciate rust, and how it taught me bats operate through radar.

4.
I forgot your betrayal that forever marks me like a heart’s tattoo blossoming painfully against an inner thigh.

I forgot the colors of a scream: the regret of crimson, the futility of pink, the astonishment of brown.

I forgot a good day can be approximated by eating a red apple while strolling through white snow.

5.
I forgot color is also a narrative.

I forgot I lit alleys by leaving scarlet roses whose perfume, I hoped, you would discern.

I forgot you saw a bottle of Apollonio Riserva 1997, and recalled how the wine’s jammy presence puckered my lips to your huge but hidden delight. I floated in your orbit then, though I looked elsewhere, ignorant of gravity’s logic.

6.
I forgot you saw each virgin moon as a ruby you wanted for adorning my body.

I forgot suckling wine from your lips, then biting, then swallowing earth, leather, currants, gravel, tobacco, oak and plums to release the same voluptuous tears familiar to Elizabeth Barrett and Robert Browning who loved through 573 letters before bearing a son they nicknamed with much affection, “Pen.”

7.
I forgot it was not a blood teardrop—simply, the last red pepper hanging from a string in front of a white wall.

I forgot how to long for rose petals yawning like little girls, like the daughters I never bore.

8.
I forgot diving so deeply into salty seas I witnessed coral form skyscrapers upside down as they narrowed towards the molten center of earth.

I forgot “civilized satiation” are words, not existence, though I had peeled away years to narrow the mutuality of our gaze into this moment when I finally ask, “How long must the sunrise remain between my thighs?”

9.
I forgot painting a floor red with my hair. I forgot backing myself into a corner: when you appeared to grasp my throat, your greedy footprints completed my painting.

I forgot nights lactating morphine, roses rebelling against the aftermath of blooming, and vampires about to sin.

I forgot lurking forever in a red telephone booth to look up at rain and your window.

10.
I forgot the sparseness of iridescence.

I forgot Tequila Corazon de Agave alchemized from the heart of blue agave bred in the rich, red soil of the “Highlands” in Arandas, Jalisco, Mexico.

I forgot the redhead during Verdi.

11.
I forgot apples rotting on a lawn.

I forgot reading lips through a mirror.

12.
I forgot magenta does exist in Geneva.

I forgot her red-rimmed eyes denoted the exhausted pace of a replicating light-year.

I forgot boats burning where fire bloomed roses in the middle of an ocean.

13.
I forgot a dungeon’s red velvet chair crashing to its side so that our pens would mate.

I forgot Andalusia, where duende also insisted on “living life as if dreaming.”

14.
I forgot a child will crayon to form a heart.

I forgot flamenco will stomp the floor to form a heart.

I forgot cantaores drowning in their own blood to sing one last letra.

15.
I forgot she clawed her cheeks.

I forgot the blood in the Sangria was my mother’s.

I forgot sunsets call for wine.

16.
I forgot a body drowning in light as a hand wrote. I forgot eyes leaking flames.

I forgot that, once, I was woken by a whisper to see a red chair tipped on its side upon a white shag carpet—when they finally found you, it was the heart of winter and the only witnesses were stripped trees bent by old winds, their muteness ancient and forever.

I forgot blood is flamenco is blood is … and one knock suffices for announcing the palo.

17.
I forgot Juana taught me, there is no madness—there is only a woman feral in love. Hear me sing to you the A.
The E. The
I. The
O.

I forgot a bird cawed as my mirror spat bloodied feathers.

I forgot a red-breasted bluebird cawing from my mirror.

18.
I forgot how much I treasured your nightingale blood, infinite ink for composing my our songs.

I forgot the blossoming of desk lamps.

I forgot a plea to be buried under a canopy of red roses.

19.
I forgot the votive candle flickering within my navel.

I forgot wrestling a long poem until I had gathered all thorns into my cupped palms for birthing psalms. I saw a stranger’s blood mixed with rose petals to birth generous perfume.

I forgot Icarus actually lived and the sky went livid.

I forgot the blades whose edges tangoed on my palms to carve lifelines.

I forgot Athena also rises from the gape of wounds.

21.
I forgot a sarong fell and a river blushed.

I forgot the mother whose absence was a singe.

I forgot red suede gleaming beneath mud as dusk introduced the weight of possibility.

22.
I forgot a pot of tomato soup simmered while I bemoaned poor Quintus Ennius who founded a movement through which he became replaced. I forgot the poet who refused to explain her references once Google invaded the world.

I forgot I didn’t imagine the sharp edge slicing my flesh, the slide of a blood drop elongating across a knuckle, the taste of my inner self as I suckled a wound, the sense of invasion as a shard slipped from the external universe into the pink fronds of my tongue … and the ensuing feeling of power as I rejected swallowing its Trojan Horse.

I forgot experiencing wine and its cousins so I could address what I could not control. I forgot how, later, the same experience became a fabric my memory crafted into a shimmering silver ballgown because I accepted discipline.

23.
I forgot receiving a scar on my cheek while an emerald mountain wept.

I forgot a bolt of cream linen turning crimson along the edges touching the floor.

I forgot that a painting fails when it images the fall of an apple instead of its shattered aftermath, or survival within an unexpected catch-and-hold.

24.
I forgot Auguste Rodin drawing women while they took their “melancholy pleasure” in front of him.

I forgot William Carlos Williams undressed a huge man in dirty overalls who fell 20 feet while lugging stones in a red wheelbarrow—his nurses shrieked when they cut away his bloodied clothes to discover a woman’s chemise with ribbons at his nipples, panties and silk stockings.

I forgot strolling through streets and seeing their dimensions as Paul Eluard’s measurements: wounds that simply would not close.

I forgot so many women and the lack of sanitary napkins.

I forgot that I prayed, only to have prayer bring forth stigmata in areas of my body usually hidden from public gaze.

26.
I forgot a strand of hair hearkening a welt.

I forgot a poem with a certain flickering light—not bright, fragile, but one senses its dependability for never dying into dark.

I forgot the poems which contain the paradox of garnets—stones for, say, jewelry but ever evoking blood: jewels that should stay pretty but end up transcending décor.

27.
I forgot his unbegrudging fall to move on his knees toward the altar. I forgot the altar’s fat white candles whose flames were scented by the blood of fallen priests, virgins, poets, crones, sons, daughters, bastards, politicians, rebels, mothers…

I forgot the membrane of your lips.