COMPENDIUM: A COLLECTION OF THOUGHTS ON PROSODY by DONALD JUSTICE 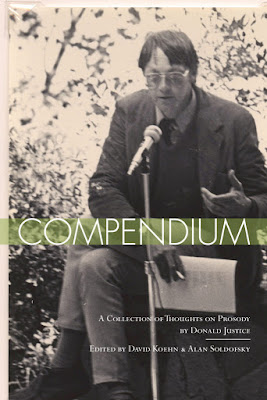 Compendium: a collection of thoughts on prosody by Donald Justice, edited by David Koehn and Alan Soldofsky
(Omnidawn, Oakland, 2017)

In the history of MFA programs in creative writing, poet Donald Justice looms large. Throughout the 1960s, 70s & 80s, from Iowa out, he was a prominent figure on the major university circuit scene teaching and mentoring many a poet-professor-to-be. Compendium: a collection of thoughts on prosody collects together the “yellowed, coffee-cup stained, and wrinkled” papers of the “prosody course syllabus” one-time Justice student, editor David Koehn, has carried “around with me since I was but a young adjunct professor.” This first-hand document for the teaching and the study of the writing of poetry is intended for working-apprentice poets. The focus is upon the sound mechanics underpinning the activity, in Robert Creeley’s words, “the sounds of words, with the play of that fact.” Or in other words, how hard poetry works to make the conjoining of sound and sense appear easy.

As with many a workbook for bettering one's understanding and appreciation for the attendant complexities of poetic practice, and similar to many an MFA syllabus focused upon such craft, the bulk of material included here is composed of a broad spectrum of example selections of poems drawn from out the Western poetic tradition. It is thus far more of a study guide than the subtitle “a collection of thoughts” might indicate. Readers should not be misled into expecting an abundance of exegetical, or other, commentary from Justice himself. There is but a brief opening statement wherein he lays out his own take on “as simple and consistent a set of terms” for the four basic “metrical types” used in English prosody: Syllabics, Accentuals, Accentual-Syllabics, and Free Verse. Following this there's a “sampling of some classical statements regarding meter” consisting of short extracts drawn from Coleridge, Wordsworth, and I.A. Richards.
The vast remainder of the book consists of selected specimen-texts in groupings covering each of Justice’s four “metrical types” along with: Dipodic Verse, Sound and Sense, and Song. In addition, there are closing sections on Some Rhetorical Figures (these are classical terms for devices of rhetoric, such as “Epistrophe: same word ending a sequence of clauses or sentences.” Including examples, e.g.: “When I was a child, I spoke as a child, I understood as a child, I thought as a child. – First Corinthians”) and Quantitative Verse in English with “Sir Philip Sidney’s rules (abridged)” followed by a few pages of metrical examples. The book's final sections, Practice Exercises and Review, invite readers to test their knowledge by marking down the scansion found in specific lines and grouping verses by metrical type. Yet with no answers or cheat sheet given, it's hard to see these sections proving useful to solitary readers attempting work things out on their own.

Koehn also includes a partial transcript from Justice's 1967 talk at the University of Cincinnati intriguingly entitled “silence and the open field: John Cage and Charles Olson.” However the selection Koehn presents focuses nearly entirely upon Justice's remarks concerning Cage and silence, leaving readers to only wonder after Olson and the open field. Hopefully those curious will seek out and listen to the recording of the talk available for download from the University of Cincinnati Libraries: http://hdl.handle.net/2374.UC/696875. There’s plenty to ponder in Justice’s comment that “Olson is probably as close to the Cagean aesthetic as any poet of reputation now writing” and that he was stating it in 1967 is commendable. Justice certainly engages with Olson's work and ideas a fair amount; going quite further, and with a genuine openness of mind, than Koehn's selection would indicate.

In the full talk, Justice at the very least lays the necessary groundwork for relating Cage and Olson, noting how the two were present at Black Mountain College. Olson in fact took part by way of reading his own poems in Cage's “Theater Piece No. 1” (Black Mountain College, August 1952) commonly acknowledged as the first “happening.” It’s unfortunate that, judging from Koehn’s remarks in his introduction regarding the talk, he doesn't appear either amendable to or close to understanding “open field” poetics: “The ‘open field’ of the space between the ‘unintended’ and the ‘intended’ represents the opportunity of the contemporary to inform practice with the very nature of the everyday: its ordinariness and its randomness.” This not only misconstrues, in a rather belittling manner no less, what’s at stake in open field poetics it also misses Justice’s own repeated emphasis in his talk upon “a poetry that isn’t yet written” and his open desire to explore the promising potential he locates somewhere between and ahead of the work of Cage and Olson.

There are an unfortunate typos strewn throughout the Koehn’s text. Of course he was working off what for all purposes would qualify as a working manuscript, yet that would be all the more reason to thoroughly comb through the pages for errors. A partial list: a metrical example in German from Heinrich Heine is left floating unattributed over the next following selection from out Beowulf (closing punctuation on two of these Heine lines is also flipped, an exclamation point appearing for what should be a question mark and vice versa.); Basil Bunting is indexed as “Bunting, Bail”; and, while humorously appropriate as it may be, nonetheless mistakenly “Coors” is given for the last name of poet Gregory Corso in a passage quotation from Allen Ginsberg that is rife with further typos. The greatest worry over such errors of course is their appearance in example texts where the unacquainted student reader might thus be misled.

Compendium is a valuable resource for an overview of the ins and outs of prosodic practice offering a snapshot of what one leading MFA instructor found most useful to his own teaching. In that regard, it’s an useful addition to the toolkit of resources for instructors, however, it should not be taken as enough in and of itself to fulfill the curriculum needs of an entire course. There’s no doubt that Justice’s own words in class rounded out what is otherwise a bare bones structure. That is exactly what’s not to be found here: the no doubt casual asides and quick feedback Justice offered in the classroom and lecture hall. Certainly if there are recordings of further lectures by Justice, such as the Cage/Olson one only but excerpted here, a set of transcriptions of them in their entirety would make a splendid follow-up volume to this one.

Patrick James Dunagan lives in San Francisco and works at Gleeson Library for the University of San Francisco. His recent books include: from Book of Kings (Bird and Beckett Books), Drops of Rain / Drops of Wine (Spuyten Duyvil) and The Duncan Era: One Reader's Cosmology (Spuyten Duyvil).