The Poet's Notes On His Poems

On My Selections with Regard to the Villa Influence

The poems I chose from my published works reflect, perceptibly or imperceptibly, the influence of José Garcia Villa on the aesthetics behind my poem-making (a phrase Laura Riding used to describe the process of writing poetry).

I want to make it clear that these poems are not Villa imitations. Anyone familiar with his work will easily see that. Nevertheless I state this for the benefit of those who may not know or are little acquainted with the late poet’s work. Some of my early poems were Villa imitations and did not turn out so well, but they were necessary to my poetic development.

Without going into a lot of detail, Villa’s main influence on my work has been on the primacy of language, of words per se, over meaning, over narration. Meaning there is in my works but it is arrived at rather than determined at the outset. The words lead me to meaning, rather than meaning leading me to words. And play is essential. There may be narrative, but it is an anti-narrative narrative. So much of what is written today that imagines itself as poetry is really prose in drag, thus rendering reading much of contemporary poetry a, well, a drag. What was it McLeish said? A poem need not mean but be.

Villa also stressed musicality. As Louis Armstrong would sing, “It don’t mean a thing if it ain’t got that swing.” I’ve always endeavored to infuse my poems with “swing.” I may not always have succeeded but my continuing attempt is a testament to Villa’s lingering influence, as well as to a whole host of lyrical poets.


is there There in dying


is there There
in dying (leaving

the paleness of what
are) an Always to rejoice

Godlike, and that
a voice, when empty of

change for its
muse, for government

of tongue, the rhyme
the range be winged by

a scheme of Light?
and yet forever flows

the Sea of Creation.
nor poets nor Poetry

sulk: living is the
lock, dying is the key.

Now O the The

NowO the The
Now Voice thin under
O now the
Thin The, the,
Slow, slow-slip you're
Under, your under
The O Voice now
An over his overs, the
Shoe up she in
Thin time, thin
This song, in
One way is a
Word the, the, in
This way is it
Sung.

this poem is a car

i overcame my car
and blew it up to show
quick mastery of
its innards, but bits of
wreckage fell fatal to
pedestrians    rolling    down
fifth ave-
nue and being
of french make hitting only
englishmen    a    wheel spun dived
ran in high air angles after
a man who was half
english and half
french and cut
him in half, certainly a
feat of accurate engineering
marvelled i this was a
car of strong desire
but it was time to fly
from the cops and widows
of Stiff Upper Lips, and
so i blew myself up
to show adroit snobbery
of god and the dicks
my bits went riding high
on whirling winds, a
merry corpse to toast, then
came running down from
east north south west
on command    to coalesce
as words
as poem
as poet
blowing up this
poem to show
quick mastery

Who is the god of snails
But Speed?

I have seen them on a
Summer night shuck their shells

And whirl around the park
Dervishes of the dark.

I have seen them naked in races
Their shiny-brown bodies
Putting the fleetest of
Olympians to shame.

The hummingbird pauses, impressed.
The turtle smiles for they
Are brothers under
The shell.

The hare harrumphs but
Bleeds in envy.

Greyhounds of the garden
And all in adoration of Zip

Applauded by worker ants
Sighed after by ladybugs
They bound across hillocks, swing from
Bougainvillea and jasmine, and
In a cathedral of star apples and
Mango trees

This congregation
Chants hymns lustily
Of poetry and love,

Of Eros and Thanatos—

Then as the curious sun comes
They veil their blinding limbs

Frocked, stately, our shells
Both cross and armor

Who have no patience

Who are Wildmen and
Conspirators at night
Martyrs by light

#14: Passwords for a Hybrid Century

The world is full of speech unheralded
Each creature, each thing, fashions
Words not said, nor heard

On the avenue, in the city's
Fields of streets
A language of secrets unscrolls
Rich in the grammar of love

Pure as an infant's theology

I sense it on the days of
Longing, when this trill and utterance
And weave, thi,s eloquence beyond the
Exultations of art, beyond the scribbles
And bankrupt narratives, blesses and

Bathes me, drowning the pornographic
Stutter of a center that devours its young.

Speak me as I speak you,
And not only you, my beloved,
But all of you who are my beloved
This speech without speaking, this

Covenant and testament
As the measure, the love of

All the invisible and real
Sometimes am I blessed

By such tongue, to move through the
Interstices of being and put

Taste death, that passage
Out of life into life
Where in a vast hall

New music plays, and each one of
Us, from particle of dust to deity,
Is a scale of ancient lore

Read me read you

An O lodged in the mouth of a  mute god

Upon his flesh,
Upon his wrath, a
Madman's mask is
Wrought: they hush
His hidden self.
Whose anger once
To movement welled,
To form, but mur­
dered fell. Was it
Men's stares, old
Age it saw? Young
Fear, banishment
That grew? Geniuses
Say; only madmen know.

Let me
Taste your bolted tongue
Strong against the
Rivings of time.
Let me
Mouth you, a word
Of undulating syllables
Tricking wordless
Rhymes from my loins.
Let me
Word you, Noun and
Verb of love, into
Perfect
Incomprehensible
Speech

The day winces, and my left shoulder twitches.
My ambition is great, and I am not calm until
I turn my head and behold you.
For you have answered the sun with such
Promptness, such delicacy, that even hooves
Flashing by smile, a whole row of animals
Dazzling with their bright teeth.
They could have torn us to shreds.
This is my break, my edge, as an ocean makes
Its way bearing the untidy flotilla of my days.
The seagulls mock me, they who canter on the
Sand, a fake cavalry deep in declivity.

Rise up O young
Life, reveal with each shadow the glow,
Render plain the starry pain, let water
Shut my eyes, as I walk into the westering waves,
Into the sun, earth hungry, my soul dry,
And you alert as a sand crab on the beach.

The day is mad with flowers
mad with hibiscus and hydrangea.
Out of Earth's ears pour jasmine and daisies,
from Earth's many mouths, the language of violet,
rose and honeysuckle, song of sunflower
and marigold, pomegranate poem and mango
Sing, blossom! Hum, bird! Praise, bee!
0 Earth you are mad with summer,
pageant of holy nonsense
and I agape in agape
rise up
from my daily baptism of

shower and shampoo,
my daily communion of java
and burnt toast.

Nobody's fool yet am I

dazed by these, flummoxed, put in
a tizzy by this morning's profusion
and by these petals
swear, fool that I

am, to set aside my petulance,
my revolver, and

all intent to murder
other fools


Winner of the Palanca Poetry Prize, Luis H. Francia has had five poetry books published, including Tattered Boat (2014), The Beauty of Ghosts (2010), Museum of Absences (2005), and The Arctic Archipelago and Other Poems (1992).
He has published two collections of essays, Memories of Overdevelopment (1998) and RE: Reviews, Recollections, Reflections (2015), the latter awarded the 2016 National Book Award for Best Essays in English. He is the author of A History of the Philippines: From Indios Bravos to Filipinos (2010, 2014). In 2002, he won both New York’s PEN Open Book and the Asian American Writers literary awards for Eye of the Fish: A Personal Archipelago. He edited Brown River, White Ocean: A Twentieth Century Anthology of Philippine Literature in English, and co-edited Vestiges of War and Flippin’: Filipinos on America. He is in the Library of America’s Becoming Americans: Four Centuries of Immigrant Writing.
He has written plays, one of which, The Strange Case of Citizen de la Cruz, was given its world premiere by San Francisco’s Bindlestiff Theater in in 2012.
A member of the New York Writers Workshop, he has taught at the City University of Hong Kong, the St Marks Poetry Project, Ateneo de Manila University, and the Iowa Writers Summer Workshop. He teaches at New York University and at Hunter College. He writes an online column, “The Artist Abroad,” for the Philippine Daily Inquirer.

The film "RIGODON: An Immigrant's Dream, An American Nightmare"--written, produced and directed by Sari Lluch Dalena and Keith Sicat, includes a sequence using José Garcia Villa's "Lyric 17." That excerpt may be seen at 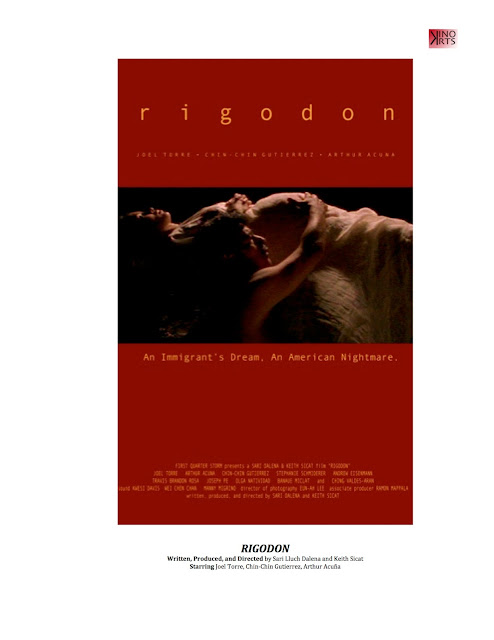 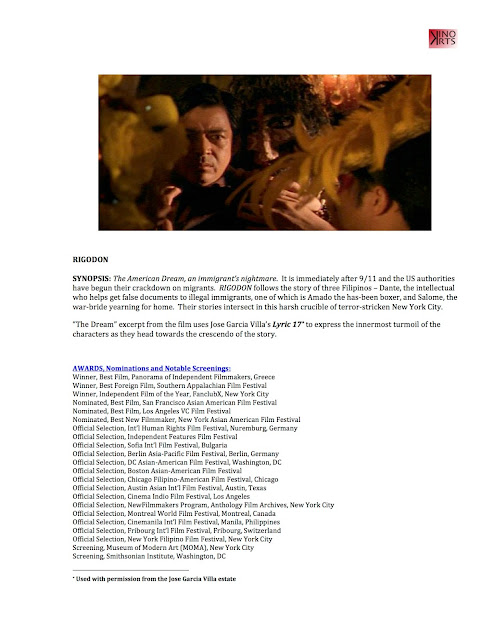 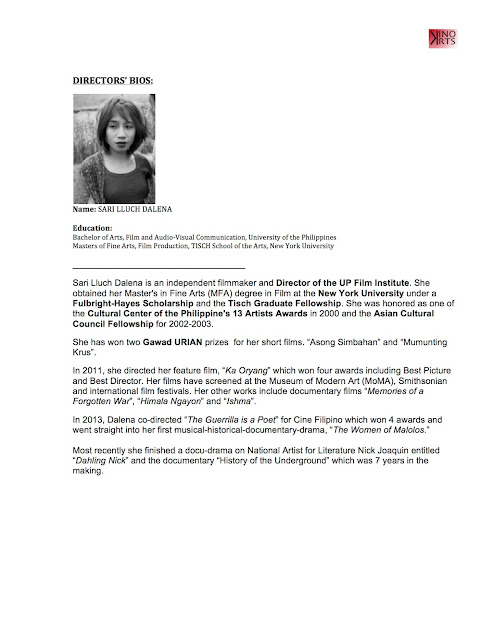 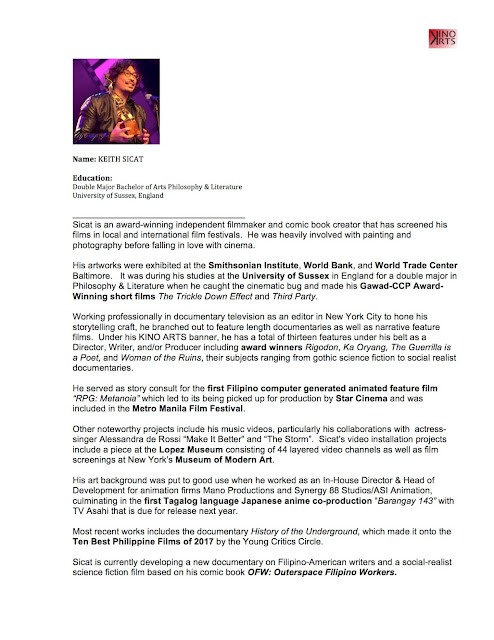 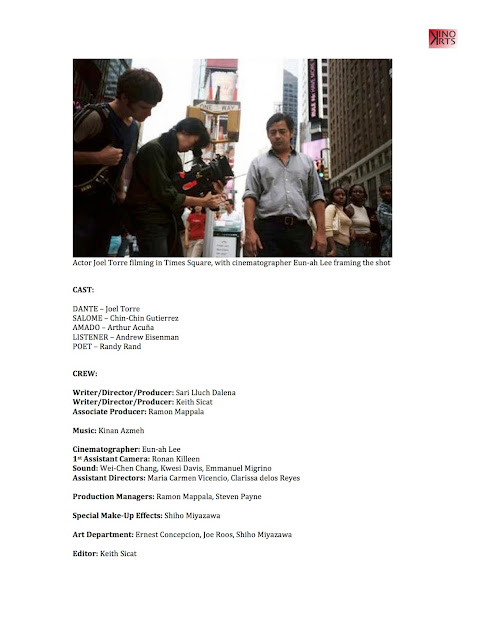 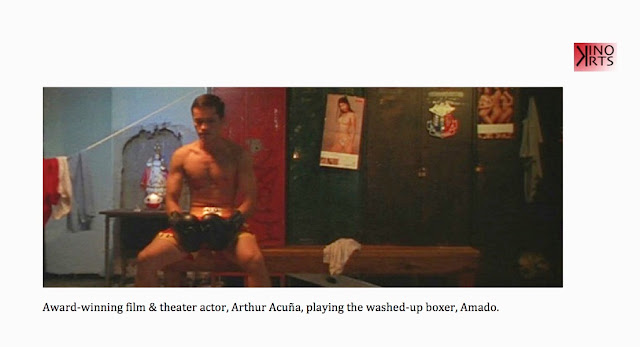 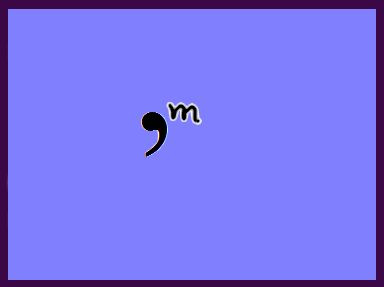 The Poet’s Notes on His Poems
This is a small visual comment from 2007, titled "Dream." In my imagination, I linked it to José Garcia Villa's poetry, which was new to me and struck me as beautiful.

Márton Koppány is a visual poet living in Budapest, Hungary. His latest book is The Seer, Redfoxpress, 2017.

The Giant in the Dirty Coat


The Poet's Notes On His Poems
These are just two of my poems that utilize commas in a manner that was inspired by José Garcia Villa’s use. The commas add emphasis to the whole poem because they slow down the reading of words, lines, and in the case of my poems, letters of certain words. In so doing they add to the physicality of the text, and act as the invitation to “voice” the poem as a performative text in real time. Villa’s commas work to compress his poems and to craft them into his own uniquely metaphysical English. In writing them Villa did not set out to be self-consciously “eccentric” as we suspect of e.e. cummings, but instead, what began as a sort of homage to cummings (Villa was a great fan), evolved into a very real, and a very sincere, form of writing.

Jesse Glass has lived for over 25 years in Japan. He is currently writing Nothing Epic: The Complete Gaha Noas Zorge, sections of which have appeared in Otoliths, The Journal of Poetics Research, and Experiment-O. His Charm For Survivors: Selected Painted Books and Sequences is available from The Knives Forks and Spoons Press.