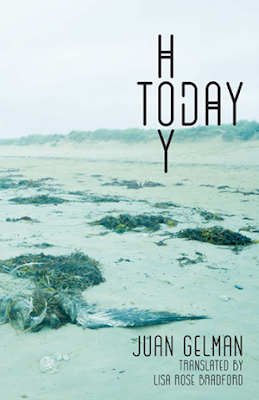 The deep-thinker and poet Paul Pines first introduced me to Juan Gelman’s poetry (Paul edited Dark Times Filled with Light: The Selected Work of Guan Gelman, translated by Hardie St. Martin, which was previously reviewed in Galatea Resurrects #26). While I was prepared, therefore, for the power of the poems I would find in HOY / TODAY, I was not prepared for the dark beauty of the collection.
But before beauty, my first take-away was wisdom. These 288 prose poems seem to me to be written by one who’s fearlessly plumbed the depths of the psyche—

Limits drown in their limits  (5)

The poem longs to mislead time, and grief comes round to quash it  (51)

The results, though, seem partly to be in service to darkness (“God has flown off to the void left by his death”). I suppose such would make sense as the book, according to translator Lisa Rose Bradford’s introduction, was “sparked by the sentencing in 2011 of those who murdered his son, Marcelo, whose body was found in a barrel filled with cement in the San Fernando River after he was ‘detained’ in the clandestine Automotores Orletti Center, active during the infamous military dictatorship of Jorge Rafael Videla.”

The poems reflect, too, Gelman’s larger poetics which may be captured in his statement that opens the book: “Poetry is a curse, an obsession. It’s a horse that gallops on your chest.” I know about chest pains, literally and not just metaphorically. And I see the constrained blood pulsing in much of these compelling poems, e.g.

Chiaroscuro murdered the light [I first read it as night]  (12)

From your humiliations a flame was borne  (115)

Thinking gives shape to a flower that amuses death  (85)

Eyes lurk in the order of the broken mirror  (37)

There are poems that seem borne specifically because of pain, of suffering. As one who’s decried poetry’s costs in my personal life (though I’ll spare you the details), I experienced how reading Gelman’s statement about the horse (a personal motif in his works) swiftly surfaced this poem, this tanka, in response:

#146
Poetry equals
Horses galloping upon
My nude, lonely chest
I should have frittered myself
Away in the country’s malls

But then I read 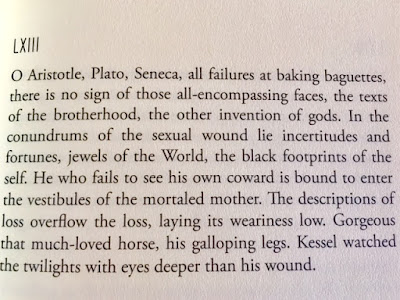 How I found consolation in the “Gorgeous”-ness of “that much loved horse”! If we inevitably must die, at least we knew Beauty?  Questions like these surface from reading HOY / TODAY.  It seems that Gelman did his job as a poet, and did it superbly—by bearing “eyes deeper than his wound.” So, here’s one more from HOY / TODAY whose poems are the best speakers on their own behalf: 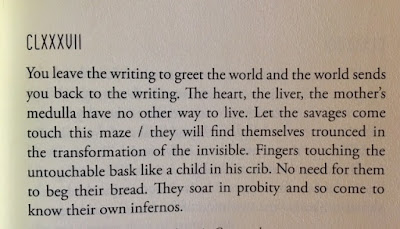 Juan Gelman has gifted readers with a legacy of a hard-earned, well-considered splendor.  RECOMMENDED, and recommended specifically for repeated readings.

Thank you so much Steve Halle and co*im*press for publishing, as well as Lisa Rose Bradford for a stellar introduction and moving translations!)

Eileen Tabios is the editor of Galatea Resurrects (GR). She loves books and has released over 50 collections of poetry, fiction, essays, and experimental biographies from publishers in nine countries and cyberspace. Her 2018 poetry collections include HIRAETH: Tercets From the Last Archipelago, MURDER DEATH RESURRECTION: A Poetry Generator, TANKA: Vol. 1, and ONE TWO THREE: Selected Hay(na)ku Poems which is a bilingual English-Spanish edition with translator Rebeka Lembo. She is the inventor of the poetry form “hay(na)ku” which will be the focus of a 15-year anniversary celebration at the San Francisco and Saint Helena Public Libraries in 2018. More information is available at http://eileenrtabios.com.