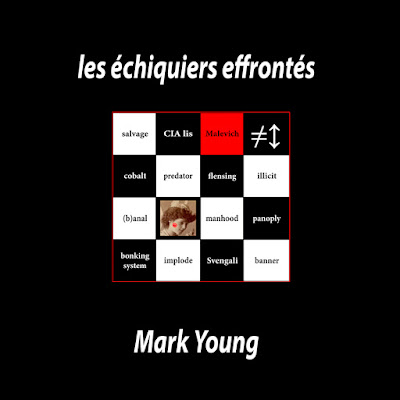 Mark Young, long time editor of the experimental journal Otoliths has a lovely and dare I say fun-filled new book les echiquiers effrontes, which translates to “cheeky chessboards” and is just what its title implies. I asked Young a couple of questions about this in-your-face yet perplexing little collection because I felt that rather than risking an over-simplified personal take I wanted to get it straight from the horse’s, or in chess terms, knight’s, mouth. Here are his replies to what were his “ready mades” based on his love for Marcel Duchamp and I’m guessing chess.

ME:  So what gives? What do all these chessboards and words symbolize?

M.Y.: I think the whole chessboard thing was conceptual at the beginning. In fact I had to seek answers from a sage as to whether it could be considered vispo. Answer was yes. I think the first stirrings were "if you filled a chessboard with words & played a game of chess, what would the result be after a number of moves?"

ME: And what were the results?

M.Y.: The first pieces were purely words. I think "The Bride Stripped bare..." was the first, appeared in a New Zealand print journal in 2004. They gradually came to include the occasional image, punctuation signs, trademarks, etc. These days the series is probably a mix of conceptual, visual, with surrealism thrown in.

I start with a title, usually inserted into the top left & bottom right squares. Some association, some chance in the filling of the remaining squares - might be what I've just written about, or added to a collage; those sort of things. Only constraint is the size of the square, which doesn't allow any word greater than 8 letters.

Has Young accomplished what he has set out to do? Yes, in a major way. So the need to ask more questions might have only complicated this already simply complicated project. Here is Young’s introduction and dedication:
for Marcel Duchamp

Today the
postman brought
me a check-
ered board from
Rrose Selavy.

This is followed by the table of contents and then 27 numbered pages, which, except for the final page consist of “chessboards” and 2 variations on chessboards. In many the titles are indeed “incripted” into the images and as stated above by Young, are at times seen in opposite corners. There are also variations on such pieces as “mountain to sea” though their titles differ and one must look closely to find where certain words replace others  (endless mutations perhaps like language itself).

Many of the lines, whether written intentionally or not, when read across the page as one would a “normal” text are extraordinarily beautiful. Example from the piece “latent feline”: “ support / the / fallen / minute / unjust / anvil /placebo / postcard”. Each word, of course, in it’s own individual square. One line is broken by 2 W’s one atop the other and at its end Jules et Jim written in exquisite font. Most of the “boards” are black and white though one is black and red and incorporates one square that contains an “illuminated manuscript” B in it aside from the usual  “sentences”, one Hebrew letter and a question mark.

This book is an EYE FEAST. Its lines can be read up, down, sideways, fragmented. “mountain / orchid / answers / laguor “ or “mountain / nightfall / meanwhile / trust”. There are endless combinations, many as I mentioned, of rare beauty, sounds, colors, timbres. I felt no lack of interest.  No boredom, even if in some cases words were repeated, because each time new combinations were born. New images. New surprises. It is, to steal words from Mark’s many gambits, more than a “homage”. It is an “intense” “enigma”, an “emphatic / brocade”.

Make your next move to the publisher and check mate yourself in a most pleasant yet baffling way.

For an in-depth take on Mark’s rollicking anti-linear rollercoaster ride, this blog post may be of interest.


Poet/collagist Steve Dalachinsky was born in Brooklyn after the last big war and has managed to survive lots of little wars. His book The Final Nite (Ugly Duckling Presse) won the PEN Oakland National Book Award. His latest cds are The Fallout of Dreams with Dave Liebman and Richie Beirach (Roguart 2014) and ec(H)o-system with the French art-rock group, the Snobs (Bambalam 2015). He has received both the Kafka and Acker Awards and is a 2014 recipient of a Chevalier D’ le Ordre des Artes et Lettres. His poem “Particle Fever” was nominated for a 2015 Pushcart Prize. His most recent books include Fools Gold (2014 feral press), a superintendent's eyes (revised and expanded 2013/14 - unbearable/autonomedia), flying home, a collaboration with German visual artist Sig Bang Schmidt (Paris Lit Up Press 2015) and “The Invisible Ray” (Overpass Press – 2016) with artwork by Shalom Neuman.