OF SOME SKY by JOSEPH HARRINGTON 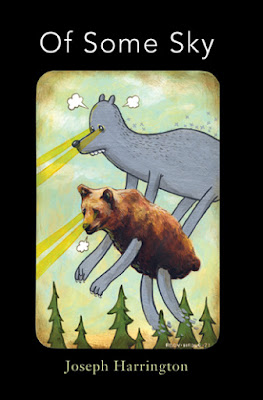 In Of Some Sky, Joseph Harrington writes about the final stages of human life on earth. Everyone seems to know a major environmental catastrophe is at hand and yet no one does anything about it. Except talk: people talk about it on television, they confess their culpability, manifest their indignation and flaunt their newfound perspectives. Some even write poems. Harrington claims he knows he is complicit in all of this, that he too adopts an attitude of “comfortable despair” (45) and complacent contemplation, but he nonetheless preaches his way through the ecological predicament outlined throughout, suggesting that society’s moral bankruptcy is to blame for the impending apocalypse.

It may be true, as the poet points out, that giving “inanimate objects” “a soul” (39) – perhaps a caricature of New Materialism’s focus on the agency and the hidden potential of things? – may only succeed in fostering questionable fantasies of human-nonhuman continuity. As Claire Colebrook points out in her Essays on Extinction, such views distract us from the problems of the present, prompting us to reject it in favor of a guilt-free post-human future. I thus appreciated Harrington’s pessimism and cynicism in this regard, his refusal to romanticize nature and our relationship with it. However, I fail to see how re-animating language, through poetic transubstantiation – “If I could make words into gulls . . . it would solve a lot of problems” (29) – wordplay – “I dare you to mine the gap between uranium / and geranium” (54) – and surface-level stitch-ups – “Why does one say she’s hot when what we mean is I am hot for him?” (51) – can more productively reconnect humans with the natural world. To be sure, people just do not care enough. Yet, as Harrington himself acknowledges, it is hard to care about the environment when you are struggling to secure your next meal: “take your eyes out of the sky / someone is stealing your bread” (96). And even if one does care, the kind of turn-around that Harrington rightfully defends cannot be brought about by isolated individuals, something the author seems willing to admit: “when he came to his senses he became a street sweeper” (94).

Why, then, insist that “even now somebody’s saying what nobody wants to hear” (97)? Misinformation and conspiracy theories aside (which the “culture wars” merely aggravate), the average person knows something must be done about the environment and many do what they can to ameliorate things. Harrington argues, however, that nothing short of a revolution (perhaps precipitated by an environmental disaster?) would suffice to meaningfully alter our relationship with nature. Slavoj Zizek defends a similar position: maybe it will take a real catastrophe to make the working class and climate refugees realize that theirs is a common cause. Harrington’s audience – readers of experimental poetry – very likely already know all of this. More than as an ecological sermon, Of Some Sky is most effective as an outburst of confusion, impotence and despair. Something must be done but we still do not know what.

João Paulo Guimarães received a Ph.D. in English from SUNY Buffalo in 2017. His research concentrates on contemporary American poetry, ecocriticism and science studies. He is particularly interested in the relation between poetic language and the so-called "languages of nature" (the divine word, the genetic code, cybernetic information, biosemiotics, etc), a subject he explored in depth in his dissertation. He has also written on topics like "poetry and sleep", "escapist experimentalism", "the science of authenticity" and the "humor of nature" (all his essays are available on Academia.edu). His work has appeared in or is forthcoming from Western American Literature, CounterText and Interdisiciplinary Literary Studies. He currently works as a research assistant at the Comp Lit Institute of the University of Porto.