THE BOOK OF MARK by AMANDA EARL 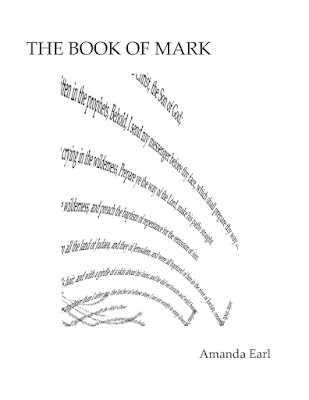 I suspect—or hope—that there’s a brilliant conceptual underpinning to Amanda Earl’s THE BOOK OF MARK, which is part of her “life’s work to translate every chapter, every of the Bible into visual poetry.” I suspect that such conceptual framework is brilliant.  But I can only suspect, or imagine, as one can’t know for sure without more information about Earl’s intent and/or poetics as regards this project. That is, what did/does it mean for Earl to change the Bible—which is text and narrative and of course a religious philosophy and, as many believe, the “Word of God”—to something “visual,” something “poetry,” and something “visual poetry”?

THE BOOK OF MARK is only one of  the series (at the time of its printing, Earl also has done Genesis, Exodus, Leviticus, Esther, Jude and Revelation) and presented in chapbook form. I hope that if and when the entire or a significant grouping of the series is available, there also would be an accompanying poetic statement about Earl’s thought process.  (Alternatively, would someone just interview her about it already?! I honestly think there’s something important or worthwhile being brewed here.)  But until Earl’s poetics is available, the reader of any of the series’ available works can only speculate … and my own speculation leads me to believe that this project’s conceptual framework is brilliant and possibly brilliantly subversive.

For, as everyone’s 21st century source Wikipedia says about the Bible, it is “is a collection of sacred texts or scriptures that Jews and Christians consider to be a product of divine inspiration and a record of the relationship between God and humans.” The Bible is a sacred text and Earl’s visual poetry translations dilute if not erase its message(s). I mean, look at this— 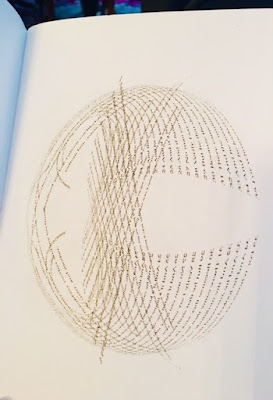 Can you, by looking at the above, glean the underlying message of the excerpted gospel?

Yet I’m hard-pressed to interpret Earl’s translations as disrespectful to the gospel. For her visual poetry translations are simply lovely and inviting. A reader/viewer can be moved to inhabit their images for some time and the experience is not one of diminishment. In fact, the images can transport the viewer into imagined narrative realms (i.e., thinking about the significance of what one sees) in the same manner of  effective abstract art. Some images reach for the sublime as if Earl, indeed, is a “believer”—if not as a Christian then certainly the transcendent possibilities of art.  Here’s another example: 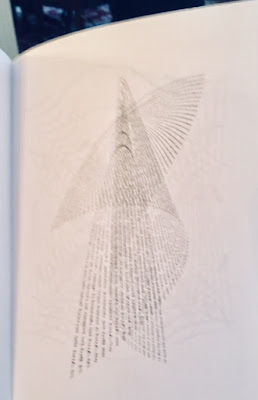 As well, ponder the possible significance of this particular image: 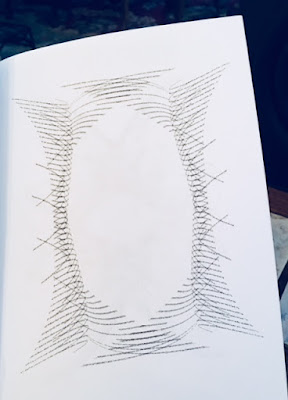 That space in the center certainly evokes the idea of clearing a space for the reader/viewer to inhabit with their own views of the image and/or the project as a whole. It looks like a framed mirror, too, for reflecting the reader/viewer, which is to say again, to acknowledge the presence of someone else than the author—it evokes both poetry’s reader-response concept as well as the idea of certain cultures’ weavers deliberately including a gap or a hole in rugs or other weavings so as to make space for others (including spirits).

And of course I can be entirely wrong in thinking that respect rather than subversiveness attends Earl’s treatment of Biblical gospels. The Bible is the best-selling book of all time (it sells about 100 million copies annually) and turning the texts into lovely images but which are mostly not legible to read may be a poke at the whole thing and what the Bible signifies (human atrocities, too, after all, have been waged on behalf of the Bible’s characters and thoughts).

But, again, when I return to Earl’s visual poetry results, I am transported in a positive way and can only be grateful for this type of embodied religion. Thank you, Amanda Earl!

And I’m moved to end with one more image—I, for one, see a lovely dress for a dance, evoking of course Earl’s lovely dances with words. 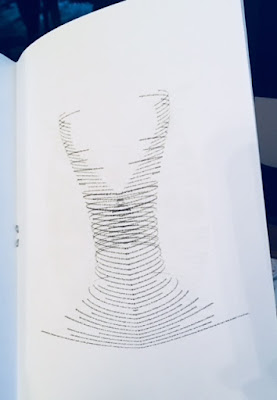 Eileen Tabios is the editor of Galatea Resurrects (GR). She loves books and has released over 50 collections of poetry, fiction, essays, and experimental biographies from publishers in nine countries and cyberspace. Her 2018 poetry collections include HIRAETH: Tercets From the Last Archipelago, MURDER DEATH RESURRECTION: A Poetry Generator, TANKA: Vol. 1, and ONE TWO THREE: Selected Hay(na)ku Poems which is a bilingual English-Spanish edition with translator Rebeka Lembo. She invented the poetry form “hay(na)ku” which will be the focus of 15-year anniversary celebrations at the San Francisco and Saint Helena Public Libraries in 2018. While she doesn't usually let her books be reviewed by GR since she's its editor, exceptions are made for projects that involve other poets; in this issue, her edited EVIDENCE OF FETUS DIVERSITY is reviewed HERE. More information about her works is available at http://eileenrtabios.com.