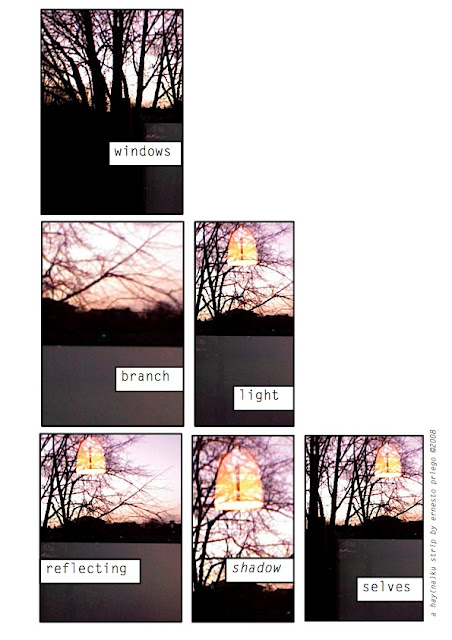 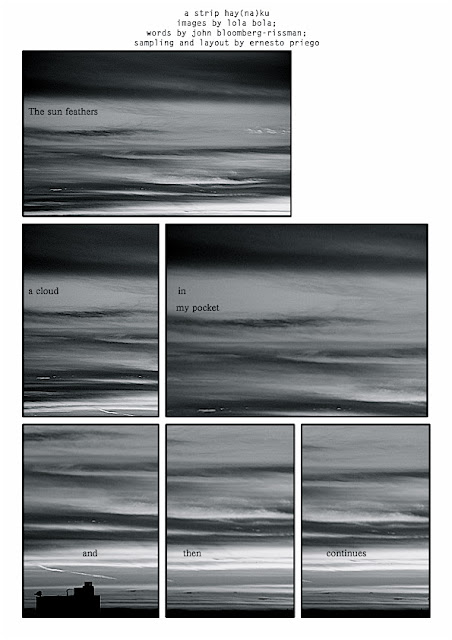 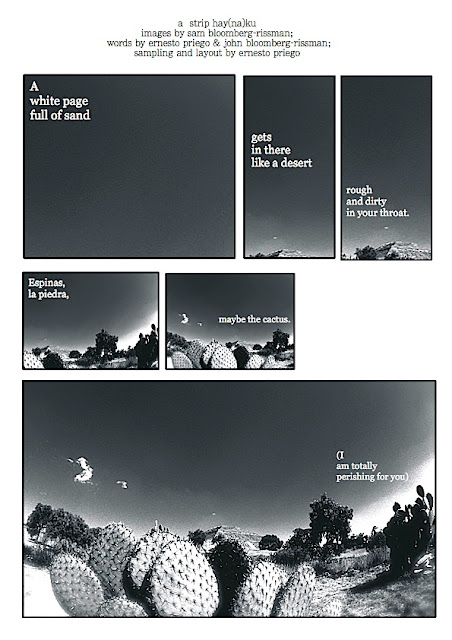 [Editor's Note: The above "strip hay(na)jus" are part of a forthcoming
book, STRIP HAY(NA)KU by Ernesto Priego. The following is an
essay by Eileen Tabios written as its Foreword.]

In 2013, I created the poetry form “hay(na)ku” with the help of other Filipino poets, most notably Vince Gotera who gave the form its name. The hay(na)ku’s core is a tercet with the first line being one word, the second line two words, and the third line three words (variations to the form are welcome). Shortly on the heels of celebrating the hay(na)ku’s 15th birthday, I came to review this 10th anniversary edition of Ernesto Priego’s comic strip with other collaborators. I had seen some of these strips before, years ago, when I was more actively engaging with Ernesto whose intelligence and visionary perspective made him the first to write the first single-author collection of hay(na)ku, Not Even Dogs (Meritage Press, 2006). Through Not Even Dogs, Ernesto also presented “jainaku,” his translation of hay(na)ku as both the term and art form. Thus, I’ve always known Ernesto to be innovative as a thinker and artist, and proceeded to (re-)read and (re-)view his strips with much eagerness.

It is useful to note that the first strip (first word “windows”) is by Ernesto alone. From there, the rest of the strips utilize words and images by his collaborators with his role then summed up as “sampling and layout by Ernesto Priego.” No doubt Ernesto first tested whatever theories or thoughts he brought to this project with his own material to see what can happen. He then applied his “sampling and layout” skills to materials provided by others—in this project, his “collaborators” are Amy Bernier, John Bloomberg-Rissman, Sam Bloomberg-Rissman, Lola Bola, Horacio Castillo, Ira Franco, and Ginger Stickney.

Ernesto’s sampling and layout approach makes sense if one recalls that, earlier this year, Ernesto published with co-author Peter Wilkins the paper “The Question Concerning Comics as Technology: Gestell and Grid” in The Comics Grid: Journal of Comics Scholarship (2018). Their paper is about how

the comics grid, the array of panels, can be understood as a specific technology of ‘revealing’ through ‘enframing’ and as such is the key element in comics technology. We propose Martin Heidegger’s conceptual framework (Gestell: literally, ‘the framework’), primarily discussed in his 1954 essay ‘The Question Concerning Technology’ (1982) as a strategy that can be used to engage critically with panel layout in graphic narratives, concluding that the role of the grid in comics and the way that new technologies put that grid to work both in the production and consumption of comics means that comics embody the relationship between technology, storytelling and materiality. In an age in which most of the screens that dominate our information-filled lives are rectangular, we argue that the purpose of the grid is to manage a potentially overwhelming sublime space.

The first strip “windows” offers a deceptively-simple example of focus. The first image/line is what one might see through a wind but not necessarily because one is looking intently at/through the window. This is why the word is the plural “windows” rather than the singular “window.” For the latter bespeaks a specificity of image and attention that doesn’t yet exist—for example, the image might surface (distractedly) from the corner of one’s eyes as one passes by a window. Vision begins to focus with the second line with its second image portraying a branch, followed by the third image portraying a discerned light.

The poetic volta occurs with the third line presenting various ways to present the light, nature, and landscape with the words “reflecting,” “shadow,” and “selves.” It’s notable that a large surface of water is presented with “reflecting” to emphasize how a reflection can occur through a watery surface; that the light is given top foreground emphasis with the word “shadow” as if to emphasize how a shadow cannot exist without light (in turn, a metaphor for how lucidity and understanding reveals literal and metaphorical darknesses); and that “selves” is presented with the seemingly contradictory focus onto a larger landscape and not the narrowed perspective of an individual to indicate, say, the plenitude of selves within a single individual, the larger context(s) which defines individual identity, and/or the non-fixity of identity that shifts akin to how images of nature don’t always reveal the teeming creatures and elements within it. All of these interpretations are made possible by Ernesto’s choices on “enframing.”

In my initial response to “windows,” I thought the strip manifestation of the hay(na)ku is more effective—more evocative—than a 100% verse version of “windows / branch light / reflecting shadow selves.”  This means that, at first, it seemed that the challenge for the comics is to present the poems in a way where the comics enhances the poem without having that enhancing force be a constraint on a reader-viewer’s subjectivity.  I’m not sure this is possible.

It’s the distinct possibility of the above impossibility that requires, it now seems to me, an acceptance of these collaborations as a single entity lacking separation between text, image, and enframing. That is, I was wrong (or reductive) to consider as I did in the prior paragraph the view of whether the hay(na)ku poem contains separate components of words and image—that the poem was, first, a verse that later was joined with images (or vice versa). I should just accept the strip-as-poem as a single entity, already unified and whole on its surface, in the way I would do so by considering, say, a three-stanza verse poem as a poem (fullstop!) rather than as a poem-comprised-of-three-stanzas.

As such, one then looks at these strips for a harmony between words, images and enframing, where one facet does not seemingly jar with another facet. Meeting this standard is one of Ernesto’s achievements with this strip, and it is an achievement that then allows him to play. It’s wonderful, for instance, how the second strip (that begins “Among / the greys / the breath emerges:”) ends with a frame of the backside of a long-haired lady’s hair with the words “unrooted passion.” The long loose flowing strands of hair puns, it seems to me, off of “unrooted” in a way that can make one chuckle while still enjoying the lyrical romance of the visual poem.

As well, because these strips are poems—they are not called “strips” but “strips hay(na)ku”—they need to have the same characteristic of all effective poems by enabling inhabitance by the reader-viewer. This is where a deftness with space, including the in-between-ness, and silence matters (in both words and images). While such deftness can be seen in the imagistically sparer strips like those that begin with “The sun feathers” and “the / promise of / a revelation forever,” this element can also be seen in visually busier strips like the strip that begins with the word “Certain,” let alone the raucous strip that begins “AND / THEN AS / I’M LYING DOWN.” Indeed, with the latter, I can honestly say that I have never seen a screaming man presented with such … silence.  The subjectivity of silence and space remains even when Ernesto introduces the din of color.

The hay(na)ku, unlike many other poetic inventions, reached its 15th anniversary with poets around the world still using the form and coming anew to the form. Part of the reason is the hay(na)ku’s welcome of variations off of its core tercet. I am glad that Ernesto has created the strip variation, and did so not by simply using his own words and images but integrating that created by others—as such, he also manifested one of the hay(na)ku’s integral traits: community. It exists through his collaborative approach. It exists through his nod to the reader-viewer’s impossible-to-anticipate but nonetheless real role. And it is community as well that aids “in an age in which most of the screens that dominate our information-filled lives are rectangular, [so] that the purpose of the grid is to manage a potentially overwhelming sublime space.”

That all of the strips, all of the poems, welcome the reader-viewer in determining the significance of the poetic encounter means that when Ernesto created his strips, he didn’t just lapse to the form of comics—he managed to still create new poems.  What a gift! A gift Ernesto possesses as well as gives. Or,

A gift Ernesto
Possesses and
Gives

Ernesto Priego is a lecturer at the Centre for Human-Computer Interaction Design, City, University of London. He is the founder and editor in chief of The Comics Grid: Journal of Comics Scholarship. He co-curated, with Ivy Alvarez, John Bloomberg-Rissman and Eileen Tabios, The Chained Hay(na)ku Project (Meritage Press and xPress(ed) 2010). He is also the author of Not Even Dogs. Hay(na)ku Poems (Meritage Press, 2006); the amazing adventures of Gravity & Grace  (Otoliths 2008); The Present Day. The Mañana Poems (Leafe Press 2010); Ahí donde no estás. De nombres propios y otros fantasmas (Instituto Veracruzano de Cultura 2013); and, with Simon Grennan and Peter Wilkins, the non-fiction comic Parables of Care. Creative Responses to Dementia Care  (City, University of London, University of Chester and Douglas College, 2017).  He posts online things whenever he can at epriego.blog and @ernestopriego on Twitter.


Eileen Tabios is the editor of Galatea Resurrects (GR). She loves books and has released over 50 collections of poetry, fiction, essays, and experimental biographies from publishers in nine countries and cyberspace. Her 2018 poetry collections include HIRAETH: Tercets From the Last Archipelago, MURDER DEATH RESURRECTION: A Poetry Generator, TANKA: Vol. 1, and ONE TWO THREE: Selected Hay(na)ku Poems which is a bilingual English-Spanish edition with translator Rebeka Lembo. Forthcoming is WITNESS IN A CONVEX MIRROR which will inaugurate Tinfish Press' "Pacific response to John Ashbery." She also invented the poetry form “hay(na)ku” whose 15-year anniversary in 2018 is celebrated at the San Francisco and Saint Helena Public Libraries. More information about her works is available at http://eileenrtabios.com.