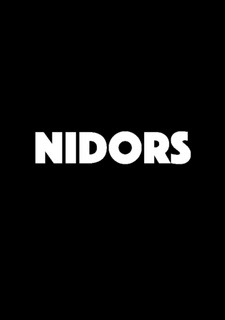 I open the interestingly-produced/designed chap NIDORS by Colin Lee Marshall to look immediately at the wildfire-colored first page (chap doesn’t bother with such tedious items as title page, copyright page, et al). I begin to read the first poem “Purpureal Proem” that opens with the line

“for meat it is that the sun did shone”

I read—and viewed—NIDORS while in a U.S. state that’s currently on fire: California. And so this opening is a bludgeoning—it brings the wildfires home with the page color and text that looks to be melting: 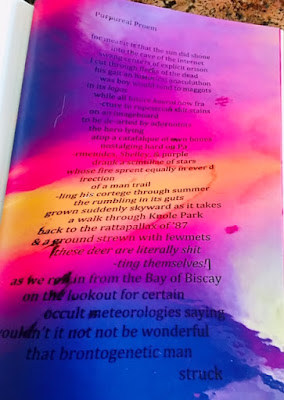 The poem also contains a wild energy through such lines as “the hero lying / atop a catafalque of own bones” as well as the bracketed parenthetical “these deer are literally shit / -ting themselves!” The fires outside my house walls are also decimating the deer and other wildlife…

I am relieved that the next poem lightens the tone by offering nothing less than candy: 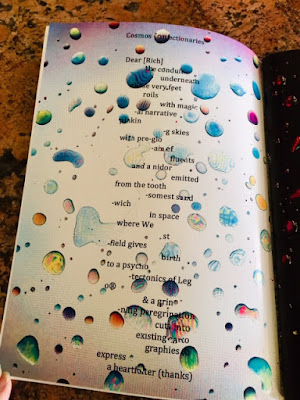 From the shared images of the first two pages, you can see that these are not just text-based poems but visual poetry, presented as they are against glossy wallpapers (for some reason, “wallpaper” comes to mind instead of just “background”).  But based on the third page facing the seemingly light “Cosmos Confections”— 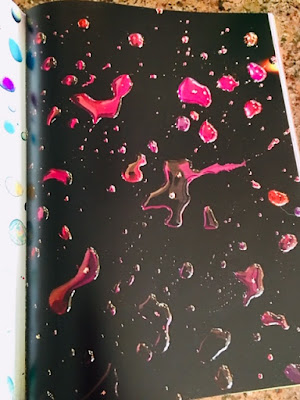 A book description on the chap’s back cover says NIDORS’ poems “sprang … from the rebuke” … turning me to what “nidor” means. Merriam Webster defines it as

“a strong smell : reek especially : the smell of cooking or burning meat or fat”

The book description also asks, “How will poetry work out its particular roboclasm under the climate of the internet?”  As someone currently exploring the “cloudygenous” (internet-based cultures), what I see are the pathos of poets nonetheless being located in non-robotic bodies: the flesh that still “shit”s despite attempts to travel internet space. Because the human clings to the internet, one can change the “white page” backing a text poem into radioactive colors and patterns. Yet radioactivity (as it were) remains mere concept: one needs to leave the page to be afflicted by radioactivity, … or maybe that’s why the poet clings to the page, to its paper?

Well, it’s all legit: Poetry can take anything thrown at it. So what if the words in some poems melt (“patrifex” and others), blur (“burial”), or shimmer-into-illegibility (“Korean Airpithaplanium”) against these bodacious backgrounds? Was Poetry ever just words?

I think of the burnt corpses of California’s most dangerous wildfires so far recorded. As of this writing, the human death toll is at 31 but likely to rise as hundreds are still missing. NIDORS reminds me that the images I’m looking at in the internet have distinct smells that fail to emanate through the computer screen.  I recommend NIDORS for its colors and poems that turn readers into philosophers, albeit those who’ve emptied or want to empty the jeroboams when considering the frailty of human flesh.