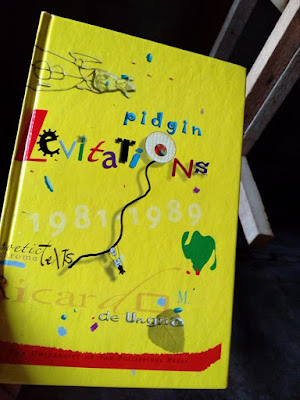 Flash Book Review No. 59: Ricky de Ungria's Pidgin Levitations (UP Press, 2004) might appear otherworldly to readers of prose. Filled with images connecting words and figures, at times distorting delineations and at others stressing the role of the surface in desiring an effect, this book is an outstanding demonstration of the poet's giftedness not only in scribbling the most striking of verses and the most playful of visuals, but also in testifying to the power of poetic reworkings. The poem will not end up as a text finished, readily savored by the impatient connoisseur. Its reality is its reworkability, its desirability of mutation. The book's success in that particular goal manifests in the poems I deemed the best from the rest: "Soliloquy of the Drowned" and "Baguio by the Book" were narratives of ordinary days penned with astonishing thoughts; "Manual of Eggs 23" and "Deaths and Conversations" verbalize the significance of self-concept in a voice of one seeking the beloved in the complexity of life and poetry; "Amp" and "Alba", though differing in length, stood out for their courage to articulate whatever beyond audition, the pain of loss and estrangement, the body and the nation both perished by uncertainties. Reading this book, for sure, requires a trained eye and an uncomplaining enthusiasm. The event of reading the text demands recollection when one is called to texturize his interpretations, and the act of rereading confirms that deconstruction can outlive decades of poetic developments.

Here is an excerpt from de Ungria's poem "Epithalamium", perhaps one of his many poems reminiscent of the 1986 People Power which ceremoniously ended Marcos' conjugal dictatorship:

Lines drawn shall keep their ink
on moving water, and when we leave our profiles
at will and enter the straw or the fish.
Until, in waking and in sleep,
in slopes where secrets and powers ferment,
we find we have rounded the mountain
and completed a theme.
And we dream again. And we swear
that no barbed wires woven
from our beliefs and loveliest melodies
shall ever wall us out again.

Since 2016, Aloysiusi Polintan has worked as a Senior High School Principal in Divina Pastora College. He started scribbling poems and essays when he was 17 years old. These poems are still kept in a notebook and wait to be revised for future publication. This notebook will be revived and will give birth to language already "lived." That is why his blog is named "Renaissance of a Notebook," a blog of poems, personal and academic essays, and flash movie reviews. His book reviews, which are published and featured in The Halo-Halo Review and Galatea Resurrects, are also to be found on the blog, under the series title "Mesmerized." He believes that the ability to judge or critique a literary piece starts with the reader's being moved and mesmerized by the artful arrangement of words articulating some longing for freedom and individuality. He's now working on a manuscript of 50 poems, with a working title of Brittle Sounds. He's 24 years old, living in Nueva Ecija.