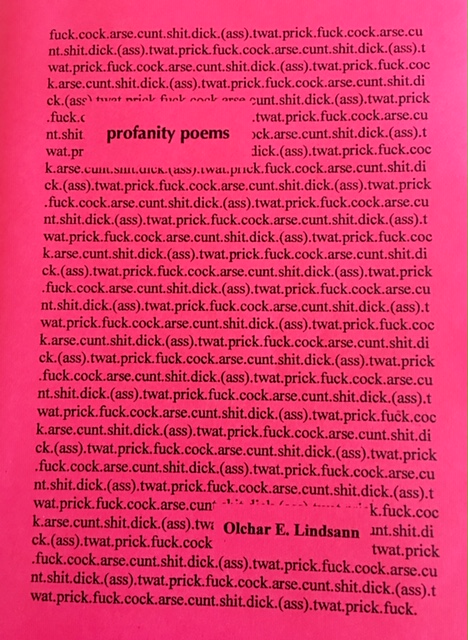 I have to admit that Olchar E. Lindsann’s profanity poems surprised me, and surprised me in a good way. First, take a look at its cover (above):

I turn the cover onto the chapbook’s first poem: 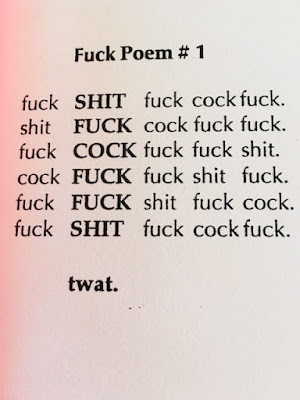 At this point, if this publication were longer than the slim chap that it is, I’d have shut it down and moved on to the next publication calling itself poetry. I’d have assumed, from the cover and first poem, there’d be more of the same and saw no need to be bored. But perseverance provides rewards and, Reader, I did get rewarded.

There’s more to this slim chap than a lot of fucking around. Well, I guess there’s that, too—a lot of it—but there’s enough wit, humor and even smarts to leaven the experience and not leave one just wallowing in the gutter. Apparently this text also has possibilities as (a score for) “sound poetry” but I was reading/seeing it, not listening to it, and such is the basis for my engagement…. well, except to say that the poems’ discernible energy and music probably do work effectively as sounded poetry. From a chap perusal standpoint, I like this scamp-y vizpo: 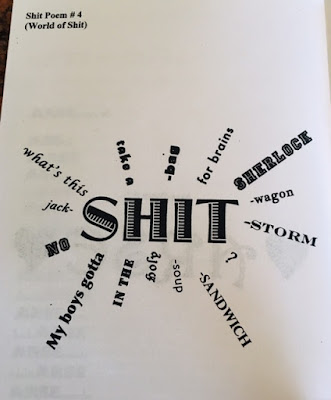 I also appreciated this dampening of Narcissus (under the current Administration, I can never get enough of that): 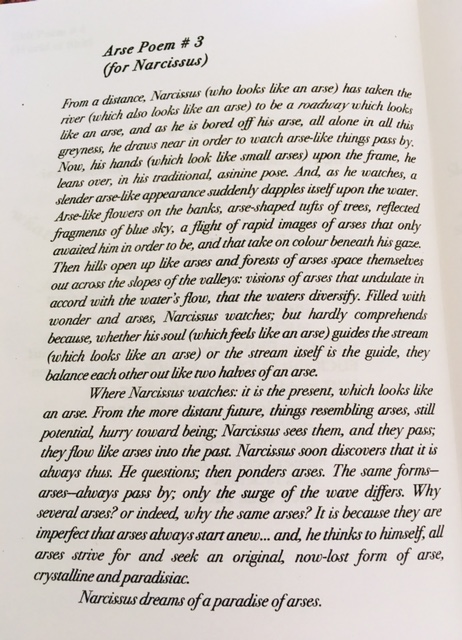 If you get past all the bloody arses et al, you’ll get to the last poem which even gives you a literary critique of the ancient Roman poets/philosophers—for what it’s worth, Lindsann (or that poem’s persona) seems to think most highly (relatively speaking among a lot he criticizes for little sustenance) of Tacitus:

“… the cocking Bastard-in-Arms Tacitus, who in his calculated fucking precision is the most pissing virile, the most shitting biting, the most bleeding vigorous of them all.”

profanity poems, to my pleasant surprise, does more than fuck around.