PHENOMENOLOGY OF THE FERAL by JULIA ROSE LEWIS 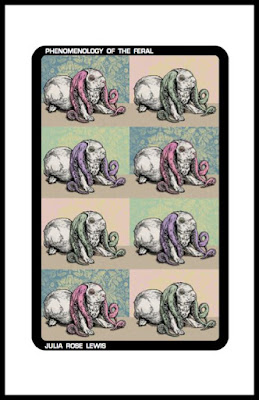 PHENOMENOLOGY OF THE FERAL by Julia Rose Lewis
(The Knives Forks and Spoons Press, Newton-le-Willows, U.K., 2018)

Oooomph. As the saying goes to paraphrase itself: got me at the first page! Julie Rose Lewis’ opening poem to her PHENOMENOLOGY OF THE FERAL displays the charismatic lineation of phenomenology of, in this case, the “feral” though I wasn’t yet sure of what that meant after reading just one poem. But I did know to admire—relish like a juicy pear, indeed, per 2nd line below—the seemingly effortless moves from abstraction-turned-metal (“pewter”) to the distinct specificity of an object (“bottle of pills”), swiftly-but-again-effortlessly followed—mirrored!—by the distinct shaping of an emotion. All this in the first two lines:

Out of the pewter, I handed over my bottle of pills.
Longing is pyriform. 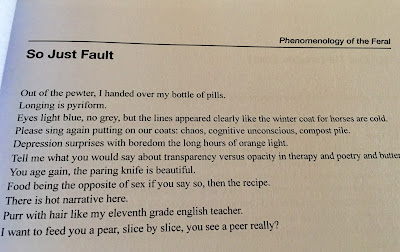 —which impresses—and sings—with the pleasingly fresh evocations (“lines appeared clearly like the winter coat for horses are cold”) to the deft making-of-solidity from the theoretical (“transparency versus opacity in therapy and poetry and butter”) to music (“I want to feed you a pear, slice by slice, you see a peer really?”). In sum, the poet shows wonderful technique that befits phenomenology. This excerpt from “Too White to Photograph” even hearkens, for me, that poet-master of phenomenology, Mei-mei Berssenbrugge (its swerves, that is, not  (all of its) diction):

An orgasm is like a refrigerator found on the side of the road,
the water on white blinds.

This is my refraction,
my change in direction a propagation of a wave.

But what’s with the “feral?” Answers are likely from the book’s second section entitled with the book title, I thought before reading the section. And as I then read and after I finished the section, I relish-swallowed Lewis’ various permutations. Here’s one of many favorites:

Phenomenology of the Feral VII

the gutter and drains
raindrops were inside us
lust, dust, must the mould

Isn’t that fantastic?! Here’s a longer one, one of the few in the section whose title does not begin with “Phenomenology of the Feral”: 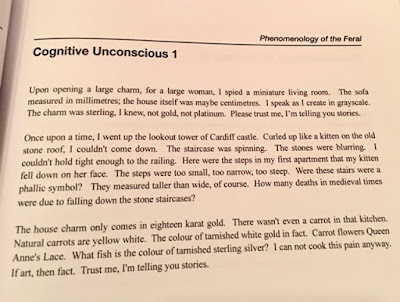 Again, so fantastic that I want to post another example for not just you, Reader, but me to relish:

FERAL (my notes say): “the edge, over which darkness. nervousness. Nerve.  Anxiety. It’s being attuned to the nerves—nerve endings—but why the darkness/discomfort? Specifically because of (its) multiplicity. There is a lot in categories of nothing.”  As I come to these notes weeks after I made them in the heat of reading through Lewis’ book, I’m not sure now as I finish this review how to transcribe. But I’ll leave it at that—I suspect the unstable comes with feral, after all.

What I can say is that Lewis’ collection is an utterly satisfying read. I close the book with an immense and paradoxical sense of comfort: from the darkness, what the poet excavated gleams.