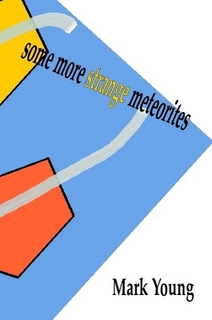 Born in Hokitika, New Zealand, and now living in North Queensland in Australia, Mark Young has been publishing poetry for almost sixty years. He is the author of over forty books, primarily text poetry but also including speculative fiction and art history. His work has been widely anthologized, and his essays and poetry translated into several languages. He edits the online and print journal Otoliths.

Given that a meteorite is a fragment of rock from outer space which survives its passage through the atmosphere as a meteor to impact the surface of the Earth, there is an expectation that these poems will interact with us at a point of intersection or, when the force is too great and fragmentation occurs, to splinter into many thousands of individual pieces. This expectation is not as far-fetched as it might seem.  One of the many strengths of Mark Young’s style is the way in which he takes two or more subjects, or in his words, familiar landmarks out of sequence, and lets them collide with each other. The resultant fallout, often as a result of some ingenious wordplay, is the poetic equivalent of the strewnfield. Part of the enjoyment is trying to reassemble the jigsaw puzzle. There is a picture in there somewhere. Strange juxtapositions, which are immediately arresting, make up much of this collection. The very first line of the opening poem, bon temps contains one:

It is the first day of coriander
I go for a walk uptown
The absence of intelligent design perplexes me.

Logic tells us that we should perhaps be thinking of the first day of Spring or Summer but the word coriander springs its surprise on us as does much else that is to be found in this volume. For example, in 7/7, the London Underground bombings sit side by side with an image of the Martha Graham Company dancing Stravinsky’s Le sacre du Printemps and in for Cindy, bird song we encounter the surprising juxtaposition of Marcel Proust and the Supremes in a combined book and record store with  plenty of word play on

….lost times
written about
in a time
that was lost
years before I
was born

It is more the ambivalence than the ambience that readers will find so intellectually satisfying for these unusual combinations are at the core of his writing and are pursued with something approaching mathematical precision. Like a mathematician, Young is clearly concerned with the theory and function of arrangements, combinations and permutations, but from a literary and musical (Young was once a jazz musician) rather than a numerical perspective.

Most meteorites are one of three types: stony, stony-iron or iron but Young’s meteorites, according to the title, are strange ones. Maybe these fireballs are lobbed from cyberspace. Meteorology, space and cyberspace are some of the recurring images to be found throughout the book. There are mentions of meteor showers, the sun and the moon, the Perseids, residual traces of lightning, thunder and summer rain coupled with imagery from our increasingly interconnected digital world. These aerolites and shooting stars dazzle us in their short-lived moments as poems on the page.

Reading Young, I was tempted to venture a comparison with the work of the Belgian artist René Magritte. It was the juxtaposition of seemingly unrelated images that sent me off in this direction. Only later did I learn that my comparison was a valid one. In an interview with Tom Beckett (Exchange Values, Monday 23 January 2006) Beckett refers to some of Young’s ekphrastic poems, in particular, the Magritte series – a sequence of over one hundred poems that Young has written in response to Magritte’s paintings [Editor’s Note: Young’s Magritte series is now up to 365 poems+.] Like Magritte, his poems are often witty as well as thought-provoking. The humour in the wordplay is at once obvious in some of the titles of his poems such as The playgirl of the western world; The Three Chambered Heart; Smile, you’re on candide chimera; an index of thirst lines and Pièce de  pestilence. It is also present in greater abundance in poems such as Electric Ladyland where household gadgetry takes on a life of its own:

The microwave beeps to tell me my origami lessons are ready.

The air conditioner claims it is out of condition but I heard it clearing its throat today.

If it’s Tuesday then the washing machine is in San Francisco on its farewell tour. 45 shows in 60 days. Mick Jagger is joining it in London to do some duets. It was supposed to be a secret but the delicate rinse cycle got its knickers in a knot & couldn’t keep quiet. Now everybody knows. Even Leonard Cohen.

His style is colloquial, made up in some measure from, (using his words), “the stochastic assemblage of found phrases” drawn from his eclectic experience of working in the corporate world, academia and the arts. The way in which the poem is presented on the page is clearly important to him, as it should be for all poets. To Young, it is always the poem that shapes the form, not the other way round. For this reason, it comes as no surprise that his poems are very visual in their impact. Examples include The Long Verandah; the / perceived absurdity / of dualist systems; the turn of the screw and Bashō condensed.  Bashō condensed works particularly well with the two words that convey movement in a vertical direction (frog and plop) being placed vertically on the page and intersecting with the one word that is static (pool) which is placed horizontally on the page.

There is much to admire in this book. I particularly like the way in which he lets his poems take on a life of their own when left with the reader – it is this generous gifting of improvisation, allowing the reader free space for interpretation, a skill which Young no doubt honed to perfection during his time as a jazz musician. Sometimes it is the sounds of words and their close proximity to the sounds of other words that are played out for our enjoyment and sometimes it is just another unexpected way of complementing what has gone before – a link from one thing to another. Above all, Young shows us just how much can be done with enjambment. In the / glazed ambiguity / of the moon, for example, the opening sentence says much about the measure of distance between the couple in the poem when the word “table” turns into “tablelands”:

He raised his glass &
toasted her across the table-
lands.

The enjambment causes us to think one thing and then to have to think again along lines that are quite different from our first thought. What at first seemed intimate and close now becomes distant. What at first was focussed and attentive has now become a distraction. And that is just the beginning for this poem has other surprises in store later on.

Like Ashbery, Young is interested in, and distracted by, a lot of things. In Re-reading Ashbery #2, Young confesses:

………I
have tried reading
him standing up &
sitting down; but, though

in an abstract way
I admire his way
with words, he is not
someone that sings
to me…

Reading Young, standing up or sitting down, these poems certainly sing for me and they will sing for many who find to their delight that they too are in tune with his wavelength. Highly recommended.