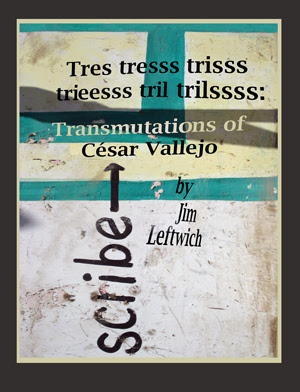 
[First published as an Afterword to the book]

Translation of poetry is impossible, as poetry is an art embedded in a particular language and culture.  Trying to translate César Vallejo is an especially useless endeavor, except perhaps for revealing to the translator him/herself the endless mirrored swirling in the work of this incredible Peruvian and universal poet.  [For people learning a language, a “literal” - as far as that is even possible – translation can be of help.]  To read Vallejo you have to know Spanish, and Peruvian Spanish in particular.  But here is a work by Jim Leftwich, a poet who sees/hears what's beneath language, and a poet who knows practically no Spanish (he has made use of what “literal” translation of Vallejo is available), a work which comes closer to the sense and voice of Vallejo than any “translation” to English I have ever seen or glanced at.  Ivan Argüelles agrees (“Leftwich has created a Vallejo more Vallejo than Vallejo...”), and the preface by Retorico Unentesi makes the same point, in a multi-layered language Vallejo himself might have used: “Betray syntax heretical indiscipline is bravest discipline.  Setting juxtaposition against another limit is done as drift.”  Leftwich's work here is not a translation but something completely different, something far more expansive and ambitious.  There are, for example, moments of homophonic transduction or translation that bloom into precisely intense excursions through metaphor, surrealist associations, language play, and, what is vitally important, an unrelenting consciousness of the surrounding world, its politics and socio-economic distortions, and of the intimate, personal and empathetic emotional mind in the center of and surrounding it all.  That is the heart of Vallejo, and the heart of Leftwich writing in the immense ambiente and presence of the Peruvian poet.  As Unentesi says, “A spoon surrounded by free soul borders on strength of the forehead weighing sacred responsibilities in a void...affects our socio-political interventions.”

Some of Leftwich's poems follow the structure or form of Vallejo's originals, as in Trilce II, with the original having a strong presence in the choral lines, translated literally (“nombre nombre nombre nombrE” to “name name name namE”) that resonate around the radically changed but directly relevant stanzaic lines, such as “Bombarded aberrational delicate cartel aching”, for “Bomba aburrida del cuartel achica”.  Or take Trilce XII, which has moments of homophonic translation (“irate in a car” for “irá a caer”, or “shit you find at yardsales” for “Chit!  Ya sale.”), and some translated words (cognates mostly, as in “Talons” for “Talones”).  The bulk of the poem, however, is much more freewheeling.  If, as I tend to believe, all words in all languages are related, even if distantly, as if each word were at the center of all language, perhaps even including non-human languages, then what Leftwich has done is to delve into that expanding sphere of associations and extract some of the other versions that are vibrating behind this poem.  Thus he writes “Natural periscopes invested in an icy sun” for “Pero naturalmente, vosotros sois hijos”.  Or “incertidute” for “incertidumbre”, which is a blend of homophonic translation with finding/creating a neologism.  The striking thing is, that all these maneuvers result in a language that sounds very much as if Vallejo himself were writing it.  In other words, these poems of Leftwich could be understood as the poems left quivering behind  (or around or under or...) the poems Vallejo wrote and put into print.  It may well be that this combination of strategies, involving both closeness and connective distance from the originals, contributes to the sensation that these poems are in the voice of Vallejo himself, in a different language and in a different time and place.

The poetry of César Vallejo is the longest-lasting and most constant voice resonating in my own consciousness, his work always stirs me up, and always gets me directly connected to  the murky roots of my own poetry; more than that, it puts me in touch with the roots of the swarming I am.  If every time one reads a poem it is a different poem, something very much the case with Vallejo, Leftwich's readings/creations are some of the most exciting and deeply grasped readings that exist.


John M. Bennett has published over 400 books and chapbooks of poetry and other materials. He has published, exhibited and performed his word art worldwide in thousands of publications and venues.  He was editor and publisher of LOST AND FOUND TIMES (1975-2005), and is Founding Curator of the Avant Writing Collection at The Ohio State University Libraries.  Richard Kostelanetz has called him “the seminal American poet of my generation”.  His work, publications, and papers are collected in several major institutions, including Washington University (St. Louis), SUNY Buffalo, The Ohio State University, The Museum of Modern Art, and other major libraries.  His PhD (UCLA 1970) is in Latin American Literature.  His latest books are Select Poems, Poetry Hotel Press/Luna Bisonte Prods, 2016; The World of Burning, Luna Bisonte Prods, 2017; Poemas visuales, con movimientos con ruidos con combinaciones (with Osvaldo Cibils), Deep White Sound, 2017; and The Sweating Lake, Luna Bisonte Prods, 2017.
www.johnmbennett.nethttp://johnmbennettpoetry.blogspot.com/
http://library.osu.edu/sites/rarebooks/avantwriting/
http://www.lulu.com/spotlight/lunabisonteprods
http://johnmbennettpoetry.blogspot.com/