ROBERT KELLY Engages by Writing Prefaces to the following:

(All published by Lunar Chandelier, 2018) 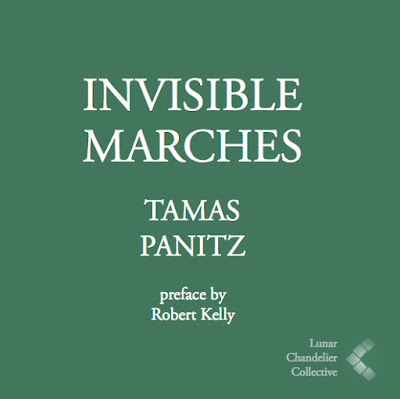 Marches are borderlands, danger terrains, full of beasts or enemies or disappointed friends seeking exile.  Marches are long lines, footsore soldiers stepping briskly with their minds on something else, thirty miles a day through the borderlands into conflict zones.  Marches are times of years when once upon a time snow was rare and lions slept and the Passover lamb nibbled dandelions, clover, newborn grasses.

In his lucid and articulate dreams, the poet talks us almost safely, slowly through the never-relenting parades, lingers in the groves, chatting up the spirits that appear.  Cities are full of spirits, cities in the borderlands especially, not just Detroit or El Paso—Catskill and Boston are by the borderlands too. Because the border is always close.  We feel all night the wind coming across the border, blasting us with terrors and sexual imagery.  We live by the border, every dawn a glorious danger we belong to.

But we seldom get to  see the border so clearly until now, the invisible made visible, palpable, in Tamas Panitz’s structured odes—the hidden world suddenly sung into sight.

Preface to Hexateuch by Joel Newberger

FOREWORD:
TO THE DEVOUT READER

If I were to speak about this I would begin by noticing the reverences, sheer reverence, implicit in Newberger’s imaginative disclosure of the multitudinous meanings of the Five Books so rightly called of Moses.  But you’re not here, I’m all alone with his texts, the generative excitement of them.  We Greeks find ourselves suddenly at home in his desert world, our Kore, our dear girl Persephone, is one aristophanic half of his Korach, likewise a visitor to the underworld, likewise a challenger of top-to-bottom authority. Newberger wanders the Pentateuch, trying to estrange it from the common and all too trivial readings it suffers from unthinking priestcraft, Hebrew and Christian.

His texts are exciting, rowdy, bawdy, solemn, full of wordplay across the languages at stake, play, not game.  This is sacred ludens, playing with the divine names, the human urges, the eternal necessities.  Playing with names is the most dangerous play of all, as any theologian can tell you—call one up and ask, if you don’t believe me.

But I forget you’re not here. You’re on the other side of the mirror, reading this. I have to report that I read these texts at times with almost fear, so much is at stake in them, how close to blasphemy he has to come to shake the characters back into life, the lives they share with one another, when they all change their names and sing.

But I read them with awe too, holy awe, at how much this mere man has done to bring the texts to life, unlocking their stories, breaking through the frontiers between Egypt and Palestine, blaspheming the blasphemers who denied Abraham and Melchizedek, and foisted an upstart Egyptian princeling on a godly people.  But I digress.

This is a book of recovery, adventure, shock, high comedy, tenderness. The Bible will never seem the same, thank God.  And one privilege of his Hexateuch is that it does a good job of contributing to the vital revolution in religious studies leading to a fresh and altogether anti-patriarchal awareness of Judaism and Christianity as one religion, not two, so long as we can recover Wisdom lost in the desert (see Margaret Barker’s work) and understand how they are linked by a shared eschaton (as in the work of Emma O’Donnell).  I’ve tried to butt in with my scribbles on what I call the Backwards Bible, the Achorei, but my guesses don’t come close to the power, strangeness and curious beauty of Newberger’s luminous heresies.

Preface to Bronze by Billie Chernicoff 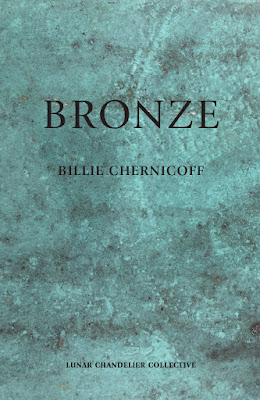 Bronze is fused from copper and tin. Venus mostly, and some Jupiter thrown in—a lot of her and not much of him, big ovum, little spermatozoon. Boy and girl. From the beginning of our world, the world of fire, artists have been melting Venus and Jupiter together to make objects of that tangible divinity we call art. Statues and swords, ithyphallic grotesques and simple wine cups, perhaps even more dangerous for their exuberantly welcoming capacity.

And she knows them all, this poet of our precise and beautiful ordinary language. She handles them, fondles them even, with her eyes, eyes that traverse the salients and re-entrants of bronze artifacts with the fluid grace of a gymnast.

That’s what pleases me most in this wonderful poem, or book of poems, this living museum of human responses to human work—the quiet alertness of her breath, the way the lines let us travel with her perceptions, breathing for us almost, showing us how to see. Old bronze seen new. No hint of antiquarian scholarship here—the years fall away, leaving only the moss-green patina, time’s only gift, green, color of Venus.

Robert Kelly teaches in the Written Arts Program at Bard College, and has written many books.  Recent publications include A Voice Full of Cities (collected essays), Heart Thread and Calls (fourth and fifth in the Island Cycle of long poems) and The Caprices, new from Lunar Chandelier Collective.