A MAP AND ONE YEAR by KAREN L. GEORGE 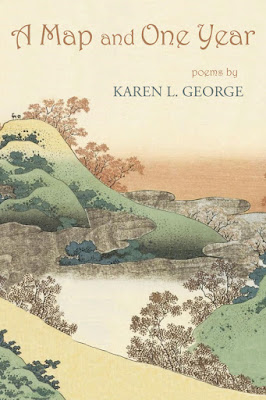 Sometimes, we poet-as-readers are such know-it-alls. We assume our readers know our references. I know of several poets who would publish (and have published) “found poetry,” for example, without feeling the need to explain what is meant by “found poetry.” In this sense, one of the strengths of Karen L. George’s A Map and One Year is her Introduction—here she explains “found poetry” and how she applied its approach to making the poems that make up her latest collection. In it, she notes how “found poetry” (like many constraints) allow her imagination to journey to places her “poems might not normally go.”

I appreciate the Introduction—its inclusion is an approach that widens the potential readership for the book.  That is, if a reader—who’s not a poet, who’s not in academia, who’s etcetera etcetera—happened to stumble across a copy of George’s book on, say, a bench where it was inadvertently left behind by its owner, that person could pick up the book and find a way to inhabit the poems through the clearly-written Introduction.

It may be that I make too much of the Introduction’s presence because, ultimately, the poems should be effective without any introduction. Forgive me: I just appreciate the lack of pretense about it.

But, yes, the poems, if they work, should not need any particular introduction. And the poems are indeed effective with their deftness, luminosity, elegance, and wisdom. It may be true that George used words she found in her readings, but she was still the one to recognize which words would find a place in her new poems.  Here’s one of the lovely poems:

which was “composed/modified from words in Naomi Shihab Nye’s poem ‘Kindness’.” Here’s another:

Sadness that blue blaze
spilling so sudden
when you come across larkspur
light-dazzled hills
the arch of a plump shell glittering
tenderness of a morning fog
the deep mountain valley.

Grieving, you turn away
the breaking sharpened
by the things alive.

which was composed/modified using words in Robert Hass’ poem, “On Squaw Peak.”

The book’s poems basically make manifest the encouragement in the opening poem, “Wellspring,” which was composed/modified using words in Tomas Transtromer’s poem “About History” (as translated by Robert Bly): 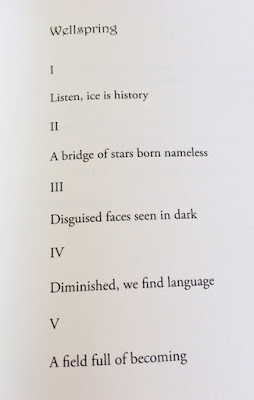 The thing to remember about a poem is that it is not made of emotions. It’s not made of wisdom. It’s not made of your most secret interior life being vomited out on a page. It’s made out of words. So start with words—what word is working for you right now? And put that down.

I understand (indeed, sympathize with) what Bob Holman said though I feel the poem can be strong enough to transcend even vomity roots. But I was reminded of his stress on the importance, the power, of words as I read through George’s collection. George created new poems by her attentiveness to words and, consequently, gives us new poems worth reading. I’ll end with one more example—this one composed/modified from words in Naomi Shihab Nye’s poem “Pollen, and whose last line resonates long after the book is put away:

Foxgloves clumped in weeds
beside the big cedar stump.
Light drums the river.