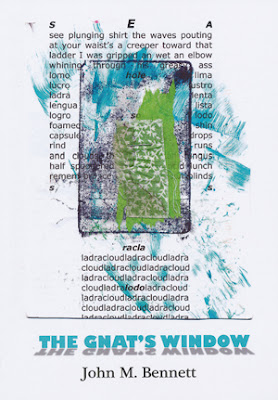 Some of these poems can be seen and read in the online magazine Otoliths, edited by Mark Young, Issue 23, published on November 1, 2011. A note on the copyright page tells us that some of the poems in this book appeared in a TLP entitled The Televisions. For now I will think of the shape of these poems in relation to that title: the tv screen as a form, within which we can insert and upon we we can impose the mutagenic form of the poem, to perform a kind of anti-televisionist function in our increasingly screen-saturated culture.
The two poems on the first page (page 3) are horizontal rectangles with an empty space in the center which hosts a single word. The first two lines run from left margin to right margin and function as a frame at the top of the "television". The last two lines also run from left margin to right margin and function as a frame at the bottom of the "television". Lines three, four and five have two words each, one of which is left-aligned, and the other of which is right-aligned. The three words down the left margin function as the left frame for the "television". The three words on the right margin function as the right frame. The emptiness in the center is the screen. In the center of the screen is a single word, which functions as the title for the poem.
I read the poem left to right, top to bottom, not expecting it to make any normal sort of sense. There is a rhyme-scheme here, for those of you keeping score at home:
A , A , B , A , C , A , C
It is the Keatsian sonnet pattern, truncated and shuffled twice.* I read lines one and two, left to right, zigzagging from line to line:
my rug rabbit yanks the coffee
shadow squirming in your pantry

my shadow rug squirming rabbit
in yanks your the pantry coffee

I do the same with the last two lines:

The rhyme-scheme is now:
A , B , C , B , D , B , B
I read an X, top-left to bottom-right, then bottom-left to top-right:
my shadow water the brine
think sticking water pantry coffee

and then continue with the same pattern:
forks water dime
mud water clocks

A blurb at the books dot google site offers this succinct clarification: Poetry. THE GNAT'S WINDOW consists of textual-visual poems, based on the form of a window with words in it hovering over a mantric text-block. Highly innovative poetry that can be read in many directions at once.
The same page also gives us the following succulent misinformation: About the author (2012). He is a Professor, Department of Construction Management & Engineering, The University of Reading. (Or, alternatively, where these alternative facts happen to be the real ones, he is the retired Founding Curator of the Avant Writing Collection in The Rare Books and Manuscripts Archives at The Ohio State University.)
The second poem on the first page is in the same form as the first. The rhyme-scheme is:
A ,B , C , A , D , B , A
I don't presume to know your humble opinions, my dear comrades in reading, but to my taste these rhyme-schemes are vast improvements upon the traditions of the practice. End rhymes are aids to memory, of course, and once upon a time they were effective for that purpose, but we have books now, and have had them for quite some time, so the need for end rhymes as mnemonic devices is no longer as necessary as it once seemed. If anyone wishes to read or perform a poem aloud, they need only to have with them a copy of the book in which the poem appears. I have seen many poets, including John M. Bennett, accomplish this -- many times! It is an elegant solution to an ancient problem. And any form of printed matter will do, it doesn't
have to be a book. End rhymes now, if we choose to use them at all, will work to accentuate the play of music across the surface of the poem. Beyond that, the music affects how the mind processes what is being read, culling from a scatter of sounds and senses to create clusters for our consideration, compiling correspondences, occult pathways via improbable connectivities in a shifting and sifting consciousness.
I recall that John Milton, writing in his introduction to the 1674 Revised and Augmented version of Paradise Lost, rejected "the jingling sound of like endings" for being "triveal, and of no true musical delight". At this late date, the irregularity of rhyme patterns, the unexpectedness of their appearance, is one of the few remaining pleasures to be had from the practice.
Rhymes in recent memory are mainly of the internal, slant and eye varieties. In contemporary practices conversant with Blasterian hacking and homeophonic translation rhymes are as often as not recombinative, ludic, excessive, cesspoolish, fishy, improvisational, salvific, binocular or ludicrous. We embrace this road of excess happily immersed in its mix of metaphors.
The second poem on page 3 is entitled "loot". The first two lines, read left to right, top to bottom, are as follows:
your plastic duck spins down the
garbage grinder guess which eye

which, when read in the left to right zigzag pattern, results in this:
your garbage plastic grinder duck
guess spins which down eye the

in X-pattern:
your garbage loot tires gasoline
and my loot eye the
is loot lost
through loot left
right loot squeaky

If the open-center forms are "televisions", then these hermetically sealed text-blocks must be the gnat's windows. In a poem as tightly formed as this "hamsterradish" (or "faucet monkey") evidence of the tiniest of decisions stands out in an underscored beauty. Once the uniform line-length is established by the first line, that length must be equaled by the second line, so an extra 'r' is added at the beginning and an extra 'h' is added at the end. If you are the kind of reader who finds beauty in the shapes of letters, then you will appreciate how this second line is shaped. The word radish has six letters. The word hamster has seven. The word faucet has six letters, as does the word monkey. You will notice, though, that while the word faucet takes up the same amount of space as the word radish, the word monkey occupies the same length of em spaces as does the word hamster. The bold face of the words faucet and monkey has barely any discernible effect on this.
So, what is this? Is it a sound poem, a score for a sound poem? Certainly. I can hear Bennett's voice intoning/chewing these sounds as I write this. Is it also a visual poem? Absolutely. And what we read, when we are reading it -- as a textual poem, as letterstrings, sequences of letters -- are the relationships of the shapes, and the space each shape inhabits. Those are the semic elements of the poem, and they are very similar to the gestural and letteral semic shapes and spaces found in handwriting, in calligraphy, and in quasi-calligraphic drawing.
On page 17 we find a 12-line version of the "television" form (3 -- 5 -- 3, plus another 2-word line at the bottom). On page 23 we find a variation on the 12-line version of the form, in which the final line is one word, broken into two words (in this instance: door, written as "do" at the left margin and "or" at the right).
On page 24 is yet another variation on the 12-line version, with the final line written as a single word spread across the page (in this case roof, with the 'r' against the left margin, the 'f' against the right margin, and the 'oo' in the center).
On page 35 we encounter a quantum leap in quantity and complexity in the form. Now it has 14 lines. The top two lines are full, the third is partial, i.e.,
gue y tenedor           sh                ape glistens
the next three are 2-word lines, as in the original form, the next is the "title line", followed by three irregular, partial lines, with three full lines at the bottom followed by a final two-word (split-word: win dow) line. It actually looks a little like a television, if that idea is already in your head.
On page 42 we find one of the poems published in Otoliths ("my red lung", or "eye"). It is a 3 -- 7 -- 3 "television" form, with 5 of the "2-word lines" having three words in this particular configuration of the form.
The rhyme-scheme is:
A , A , B , C , B , D , E , F , G , D , E , H , A
here is the original
https://4.bp.blogspot.com/-5cXwN0DmjWI/TlWeeedTykI/AAAAAAAAHAQ/SAJgtONoCBo/s1600 /jmb%2B29.jpg
and here is a remix (reading via several routes)
wheezing like uhh bean

On page 48 we find a 15-line version of the "television" form: top three lines full, middle seven lines partial (one 3-word line, two 2-word lines, four 3-word lines), followed by four full lines, and a final line with the letter spread across the page ('n', aligned to the left, 't' aligned to the right, 'ex' in the center: "next"). The version has a three-part title: cages up ex.
On the final page is a 17-line version of the "television" form: the first and last lines have letters spread across the page (top: 'w' at the left margin, 'e' in the center, 't' at the right; bottom: 'bo' at the left, 'o' in the center, and 'ks' at the right); the top three and the bottom four lines are full; and the center eight lines are partial.
This last poem is over twice the size of the first poems in the book. I am tempted to say "over twice as long" as would be the standard way of describing the relationship of a seventeen-line poem to a seven-line poem, but that description seems inadequate for an understanding of how this form has morphed and evolved through the pages of this book. It seems more accurate to think in terms of volume, as if we were describing the size of two containers. So the last poem in the book is over twice as big as the first poem in the book. It contains that much more of the "stuff" that this kind of container was made to hold. Exactly "what kind of stuff this kind of container was made to hold" has been the subject of my writing in this essay. There are some letters, sequenced and juxtaposed, some spaces, between words and between letters, some sound patterns (not entirely subjective, but nuanced from one ear to another); there are some structural patterns, some formal elements, a visual as well as a textual syntax.
These poems, as containers, invite us to work inside them, to play with the things we find there, to move things around, to look at what is there from different angles, to combine and recombine. Formally, these poems are as solid as sonnets. But the elements of which they are made are interchangeable, unstable, imbricate. Each word, each letter, in its place inside the poem, is a provisional solution to a problem posed by the structural requirements of the poem. An extra 'h' here, an extra 'r' there, these are ad hoc arrangements, the poet working with what he has in front of him, rearranging the furniture in the room. Gradually the reader becomes accustomed to this kind of thinking. We can make this work. We have everything we need right here. Mumbles twisting at the ant, my blue cloud, lawn eye bluing, shadows cuddled like uhh bean.
_________________________________________
*rhyme-scheme for the Keatsian sonnet: Either
A -- B A -- B C -- A D -- E
or
A -- B B -- B B -- C B -- D
-- C -- D -- B -- C -- D -- E
-- C -- A -- C -- A -- B -- D