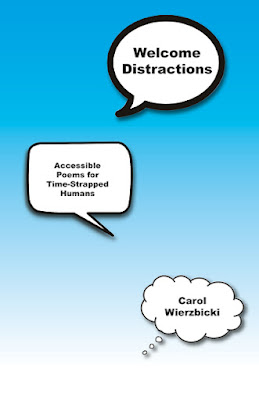 The subtitle of Carol Wierzbicki's new book Welcome Distractions says it all, "Accessible Poems for Time-Strapped Humans". This is further emphasized by poet/artist Yuko Otomo's blurb which is simply "...the humane manner in which she uses language is her strength and grace." The book is divided into three sections "Political, Residential and Commercial", "Relationships", and "Words and Music". In the first section she pokes fun at everything including the world she so often gravitates in (poetry). From "World Champion Cat Breeder": "So you're big in the poetry world / Who cares? / It's like being a champion cat breeder / You move in weird, fussy / little circles / where egos erupt like cat-spit." How true. It's a brutal poem filled with dark humor. "Do people...hang on your every word? / Well they're just poets / they already know what you're going to say..." And this is just the tip of this very cold iceberg where the poet ends up in the litter box. The irreverence of these poems in the first section especially are best read aloud to yourself in front of a mirror so you can see and not just feel what's it's like to be cut down to size. In "10 ways to Get into the Next Whitney Biennial (with Apologies to David Letterman),” here's just a taste: "6. Take a cheesecake shot of your mother wearing no bra..." Get the book to see the rest of this sentence. Or "9. duct tape your dryer to a piece of drywall", "2. feed your dog some peanut butter. Let the camera roll until he's finished licking it all off". You get the idea. From "Mammogram": "There is no Homecoming King / Only the angel of Death lurking inside / the X-ray machine." In the words and music section we get "Song Request" where Wierzbicki intones "I just want to hear "Kiss" / that impossibly funky tune / with Prince shrieking over a deep bass groove. / Heartbreak and disappointment are on tap tonight / for this brother and sister / two fish out of water." I won't even attempt to quote from "Listening to Sonny Rollins", one of those rare poems which centers around coming into adulthood and never even hint at what is contained in the title. Sheer brilliance and rare indeed. In "To a Bass Player" Wierzbicki again talks about the angst of growing up and how "My dad once had a stand-up bass / like yours...played Polish weddings and big-band orchestras / and small ensembles." You feel her speaking to this musician internally while listening to him play as you feel the melancholy of lost times. "O rats O cats O homunculi..." This is a book that will make you laugh. Cry. And wonder why. As Wierzbicki puts it, "I'm not a killjoy; / I just want people / to stop telling me to smile." "Look out your window / See how the stars come out / and the moon blesses your wounds." Read this book and look into your window and see what you might find there there.