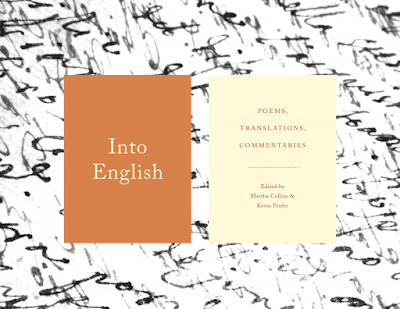 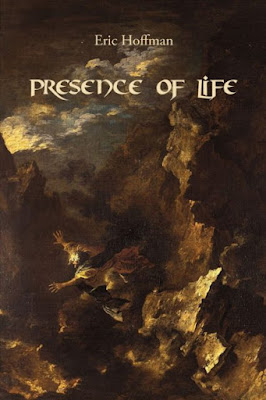 Before I even opened the book, it had me. I only needed to know of the concept underlying Into English: Poems, Translations, Commentaries edited by Martha Collins & Kevin Prufer to immediately be drawn: it’s a brilliant idea that should have become a book long ago. Essentially, Into English presents 25 translators who each wrote about a poem they chose and three translations of it. The anthology offers the original poem and the translations side by side, making it easy for the reader to compare them—for example, a reader who’s not fluent in Russian will receive insight as to why an Anna Akhmatova poem might begin in three different ways:

“My heart grew chill so helplessly,”

"How helplessly chilled was my chest, yet”

“I was helpless, my breasts were freezing.”

and a non-Spanish reader receive similar insight as to why a Federico Garcia Lorca poem might begin through these three varied ways:


“I want the water reft from its bed,”

"I want there to be no channel for the water”

“I want the stream to lose its banks.”

before going on to read an essay addressing translation in general and an “expert”’s point of view on the specific elements that went into translating the sample poem. The concept is so interesting that I’m game to see a Volume 2, 3, and so on…

I couldn’t find an online list of Into English’s 25 translators so I’m posting here the Table of Contents as such should show the wealth of riches in this book:
[Click on all images to enlarge] 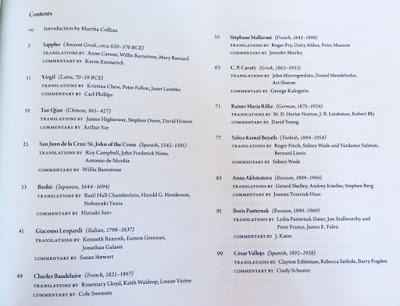 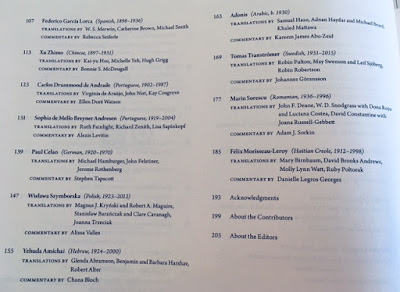 For an example, I’ll show the book’s treatment of a poem by Basho: 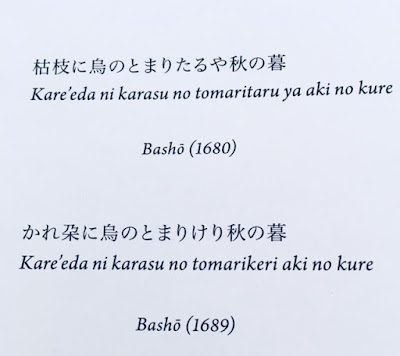 The end of autumn, and some rooks
Are perched upon a withered branch.
—translated by Basil Hall Chamberlain (1902)

On a leafless bough
A crow is sitting;—autumn,
Darkening now—
—translated by Harold G. Henderson (1925)

A black crow
Has settled himself
On a leafless tree
Fall on an autumn day.
—translated by Nobuyuki Yuasa (1966)

By looking at three versions, one can discern and logically ponder the differences in translations. Note, too, that the translations are dated, a smart editing decision as the translator’s times can affect subjectivity (and possibly responses to prior translation versions). For Basho’s poem, the commentator Hiroaki Sato offers a wonderful analysis that begins (as it should) first with a note about general Japanese-to-English translations: “The translator from Japanese into English often faces a question: is this word singular or plural? That’s because most Japanese nouns don’t distinguish between countable and uncountable, whereas most English nouns do.”

Indeed, one of the strengths of Into English is when the commentators, before looking at the individual poem’s translations, offer insight into the idiosyncracies of translating certain languages into English.  Sato does so with Japanese, Bonnie S. McDougall with Chinese, and, to wonderful effect, Susan Stewart with Italian. Here's an excerpt from Stewart's essay regarding Giacomo Leopardi: 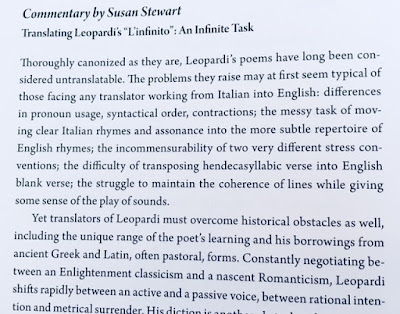 While the commentators are generally positively-inclined to the various translations (they do choose which ones to highlight), I am appreciative—indeed, humored—when they second-guess a translator’s choice.  For instance, when Joanna Trzeciak Huss notes about Stephen Berg’s translation of Anna Akhmatova in a poem entitled “Last Meeting”: 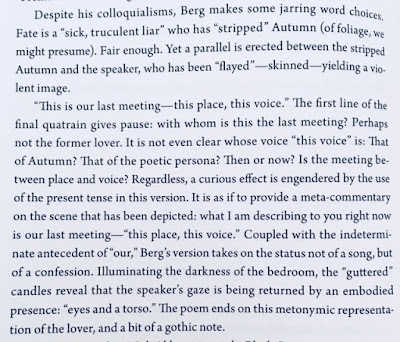 Another example comes from J. Kates’ commentary on the translations of Boris Pasternak’s “Hamlet”: 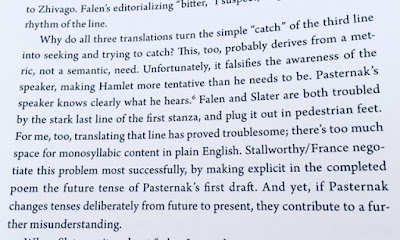 Relatedly, I appreciate J. Kates’ preface to his commentary: 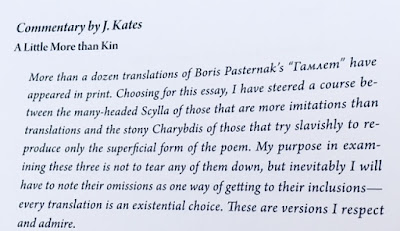 All in all, Into English is educational as well as an accessible look into the many considerations of translation and, in particular, translations into English--it is an immensely satisfying read.

Speaking of translations, for the same reason that the commentaries in Into English are so valuable, it is to the reader’s benefit that Eric Hoffman provides a “Translator’s Note” before the poems in his PRESENCE OF LIFE. (The Translator's Note and sample poems are featured also in this GR issue HERE.) The note explains that the poems comprise “a translation of a translation,” in this case translating scholar Brad Inwood’s translation of writing fragments by pre-Socratic philosopher Empedocles. Whereas Inwood apparently first translated Empedocles’ fragments “literal”-ly so as to address “meaning,” Hoffman chose to abide by “poetic values.”

Reading through Hoffman’s poems, though, reveals why Inwood would have wanted to privilege meaning even if the result was to be “inelegant.” Empedocles clearly had (specific) things to say and his intent should not be diluted (disrespected?) for even poetry’s sake; Empedocles was a philosopher after all. Thus do we come to Hoffman’s achievement—that in presenting Empedocles’ thoughts, he surfaces poetry. Here are examples:

Night is blind
and lonely.

68.
An eye desires the intellect.

85.
Thick limbs above,
below, the delicate roots—

90/91.
Water mixes with wine
more easily than with oil—

to bitterness, heat to heat,
piercing to piercing.

As exemplified above, by successfully presenting both philosophy and poetry, Hoffman respected Empedocles’ views as well as abided by poetry’s values. There is nothing ponderous about these poems—indeed, they are elegant. Recommended.