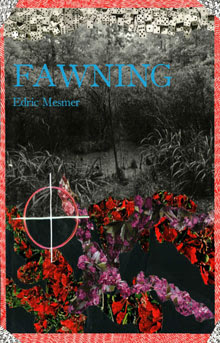 “…against what con- / cordance was that silence spoken?”

Edric Mesmer’s Fawning, his sixth collection, is in the service of the marginal, the outside, the banished. It brings a lavish vocabulary and a serpentine syntax to bear on an eroticized discourse, its imagination of queer poetics asking that the characters and resources of myth, Greek and otherwise, become a place to stand, “against / sheer sky” and “against / the tide,” a clearing where the poet can attempt an inspection of self amid a community of selves.

The techniques of the book are various, controlled, assured. The lines are flexible, ranging, capable of moving from ten syllables to two syllables with no sense of rupture in the rhythm, so short-long short-long becomes a consistent beat, establishing a perfect balance between like and unlike, but never approaching the effect of the metronome. This style, this prosody, is never allowed to harden into mannerism, and becomes almost contrapuntal at times, even antiphonal, managing to maintain an elegant cadence within an array of measures, an alternation of difference and similitude which keeps the attention guessing.

The poems gathered here provide a lesson in terminal consonance and unlikely rhymes: strife/sites, for example, tonic/logic for another—scalding/scolding, ether/meter, and so on—with no apparent end to invention or diminution of playfulness. These units of echo, small blocks of sonic repetition, form a kind of base, a structure to be deviated from and returned to, a rhythmic ebb and flow which lends a melody to the utterance, without it ever lapsing into the merely formulaic. There is an air of joyous extempore to this writing, which belies the discipline of its craft, and a sense of surprise accompanies the turning of the page.

“…the scrolling unscrolling of voice…”

The poems flow, seamlessly, one into the next, and the reader is buoyed along by their momentum, their continuum, and individual poems are all linked and interwoven, with terms, words, proposals and concepts reoccurring, each changing context providing a slightly different shade of nuance. This is particularly the case in the shift from fawning to fawns and back again, an alteration of perspective as well as idiom of meaning.

It is surely no coincidence that the cover of the volume alludes to Mallarmé, Un coup de des, which in turn reminds us of L’après-midi d’un faune, and this faun is an intimation, a ghostly presence, always hinted, never spoken, flitting, horns sprouting, throughout the sequence. And so the drama of the poems is their motion, an iteration and a reiteration, constantly evolving, almost a process of accretion, and always a challenge to “brute / stasis.” The book, its “lacing” becoming “threading,” its “thongs” become “cords,” begins to resemble one long poem, or a serial poem, with each separate part acquiring the status of a stanza.

As the act of reading moves from desire to delusion, from height to descent, from gender to hermaphroditism, the trajectory of the book becomes, perhaps, a quest for identity, to arrive at “an etiquette / all our own,” a resolution or a stability immediately undermined by “scapegrace / any one of us” and the splendid formulation “rife with / unbecoming.” And so the poems refuse, even repudiate, notions of finality, of becoming as conclusive or gender as fixed, or identity as social obligation.

“…who will glide through these evasions…”

Fawning is a dream of a voice “risen into chorus,” of a self “one with the rally,” “a collective leg” in a “single singlet,” which is a particularly striking appraisal of these poems, quite unlike anything else I’ve read in contemporary poetry.

Marten Clibbens is the author of several collections of poems, including Veterans Day and Iconography.