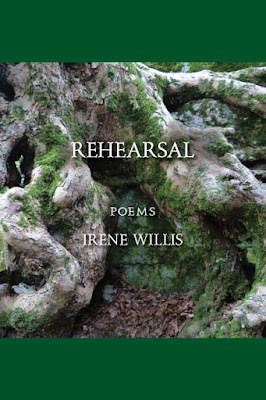 I appreciated reading Irene Willis’ REHEARSAL though, unfortunately, I can’t say that I enjoyed it. Relatively recently, I became old enough to acknowledge my mortality, and REHEARSAL—by featuring a woman going through her husband’s last days and then widowhood—cuts quite into the bone. My empathy, however, is also a testament to the power of these poems, poems like 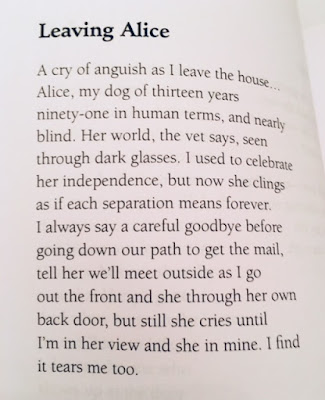 which captures exactly what I went through with my beloved dog Achilles in the year before he passed at age 13.

When I was a younger poet, I once wrote the line I shall end up alone, alone, alone.  I thought it so dramatic and, being young, wasn’t so focused on the implications of that line.  Now, I'm at the age where I occasionally have conversations with peers as to who will be there for us when we are older and presumably more infirm—so that I cringed in understanding too well the significance of 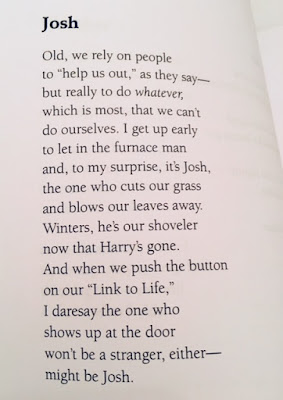 I cringed again when I read "DNA" for featuring the lines

I was so impatient when my mother
walked like this, the way I’m walking now—

the cane a bare necessity…

While I don’t yet need a cane, I do remember how we joked over how slow my mother came to walk during her last years …

I suppose aging and addressing one’s mortality are too often cringe-inducing topics. Yet, there’s enough variety within the experiences proposed in REHEARSAL that one also ends up appreciating the love discerned to be shared by Willis and her husband. As well, my primary take-away ends up trying to learn by example … though, in REHEARSAL’s case, it's trying to learn by the opposite of example. That is, Willis also wrote a poem after reading Donald Hall’s Essays After Eighty wherein Hall apparently says that (“with Jane gone”) all he can then write at that age is prose. In response, Willis wrote 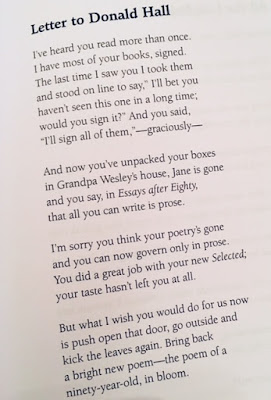 Reading Willis’ letter to Hall reminded me of another poet I met just before he would come to pass: Philip Lamantia. One of the joys from a summer I shared with him was seeing how he was still going strong, continuing to write his poems. As I remembered him, and how, unlike Hall, he continued with his poetry-writing, I came to write this poem (part of a series of death poems I’m writing in the hay(na)ku form):

He fed me
olives and
Portuguese

from life when
you’ve received
this

moment good enough
to serve
as

and Portuguese wine”—
a great
moment

and only one
of many
Thus

why still be
consumed by
Desire?

other poets who
aged into
prose

And when you
complained over
your

inability to draw
a straight
line

he insisted, “Then
draw a
curve!”

So there you go. If you read a poetry collection and it results in the reader coming up with their own poem in response, that’s as sure a proof of the collection’s power and merits. Thank you, Irene Willis, for sharing REHEARSAL with the wider world. I'm at least bolstered against aging into prose.

Eileen Tabios is the editor of Galatea Resurrects (GR). She loves books and has released over 50 collections of poetry, fiction, essays, and experimental biographies from publishers in nine countries and cyberspace. Her 2018 poetry collections include HIRAETH: Tercets From the Last Archipelago, MURDER DEATH RESURRECTION: A Poetry Generator, TANKA: Vol. 1, and ONE TWO THREE: Selected Hay(na)ku Poems which is a bilingual English-Spanish edition with translator Rebeka Lembo. She invented the poetry form “hay(na)ku” whose 15-year anniversary in 2018 is celebrated at the San Francisco and Saint Helena Public Libraries. While she doesn't usually let her books be reviewed by GR since she's its editor, exceptions are made for projects that involve other poets; in this issue, her edited HAY(NA)KU 15 is reviewed HERE. She also is pleased to direct you elsewhere to reviews of her books: TANKA, Vol. I was reviewed in The FilAm. More information about her works is available at http://eileenrtabios.com.