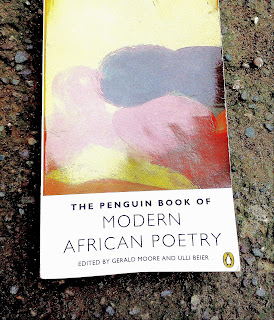 Flash Book Review No. 41: The fastidiousness of the poets in this collection, as well as the urgency of their lyrical voices, has surely resonated in the African nations' unending quest for spiritual depth and tranquility. Included in this book were the interesting, intriguing and uncompromising verses by poets who have always deserved intercontinental readership. Christopher Okigbo (Nigeria), David Diop (Senegal), Kofi Awoonor (Ghana) and Jack Mapanje (Malawi) are some of the African poets whom I adored for their works which spoke of transcendence and of man's perpetual discourse with nature and with the painful past, the prejudicial present and the puzzling future. How they have always loved light to remedy the daunting darkness of history and politics, and how they have always lingered to listen for sounds of hope and celebration whenever dryness and silence penetrate their identity --- these are the operative themes of the poems in this collection, poems that captured the essence of antiquity, with the rhythm of the contemporary. Here is an excerpt from "The Seed in Me" by José Craveiriñha (Mozambique) :

To say to my bones
forgive us, brother. 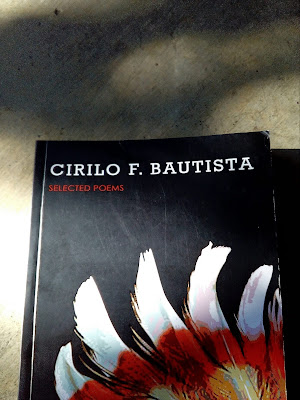 Flash Book Review No. 46: In 2016, the University of the Philippines Press celebrated the giftedness and greatness of Cirilo Bautista, who passed away a couple of months ago, by collecting some of the poems formerly published in his five books. If one has read his many works, he will notice the varying structure of his poetry, how he employed in his verses the discipline of the form as well as the occasional (and for me the more effective) experimentation on how far and deep and wide language could go. Resonant in the collection is the sincerity of his craft, brought by his unrelenting contemplation on the fate of the nation and by his dedication to place Philippine literature in the international landscape dominated by Western figures. A reader attuned to the historical and cultural forces around the development of Philippine poetry in English can give a panoramic view of reasons for launching Bautista into the Order of National Artists. Whether they serve as ekphratic pieces or recollections of sojourns, his works always invite us into the quest of questioning, each line and couplet is a rhetorical device. Poems such as "The Tiler", "Takanawa Prince Hotel", "Pedagogic" and "Written in Stratford-upon-Avon" are the finest examples of the Cirilo Bautista Way, demonstrating his rigor in probing the intricacies of aesthetics, ethics and politics, while capturing the circumstances of the common people. Such poems should be included in literature and language textbooks so aspiring poets, who are now more passionate in self-publishing and spoken word, would realize that poetry, even in the language of our colonizers and of globalization, should heighten a people's sense of time and place, and should not be limited to the mere expressions of swooning, angst and self-deprecation. Specially in these times when mainstream spheres avert their gaze at the printed word, the preservation and the continuous reprinting of finest literary works is an inclusive task. (Next on the reading list: The Trilogy of Saint Lazarus.)
Here is an excerpt from one of his poems, "Landscape with Weeping Figures":


Time and silence after all are a mask
To cover the blood of our face
Since speech and sleep cannot erase
Our guilt. Correcting landscape is our task.
That is why I refuse to wear a mask.