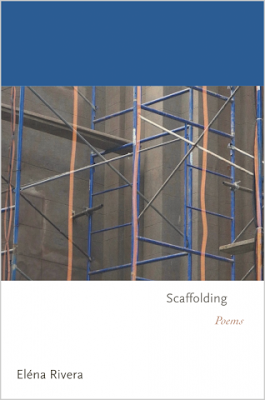 In the vast majority of poetry books, we encounter poems stripped of their scaffolding. Which is to say, the incredible labor that has gone into the writing—drafting, redrafting, editing, revising; not to mention reading, research, and living—has been removed and made invisible. An evidence of labor withdraws, leaving only the poem as artifact. In Eléna Rivera’s third full-length collection of poetry, Scaffolding, the poet offers a corrective to this trend by revealing (and reveling) in poetry’s living labor. Using dates, strike-throughs, and the indication of “versions” in her titling, the reader becomes privy to a poetic process synched with a process of life, which is to say, working, seeing, breathing, conversing, remembering, imbibing, and loving. My favorite among the poems are the “versions,” which offer variations on the same poem, distinguished only by dates. The poems are similar enough that we almost see them as ‘takes’—as in filmmaking or studio production. Interestingly, neither poem seems to be ‘better’ than the other. That one comes after the other does not imply ‘progress’. Rather, the poems are merely different—and all the more pleasing for being offered in succession, unfaithful copies of one another without original. Yet, there is something else that is unusual about this book in terms of how it transgresses and challenges the norms of the ‘poetry book’. And this involves Scaffolding’s take on the sonnet, since all the poems in the book consist of 14 lines. While the poems assume the conventions of the form—they are often “epideictic,” to quote the Renaissance scholar Joel Fineman, inasmuch as they not only offer praise, but are about praise—they also challenge the sonnet tradition through a kind of amplification and displacement of this aboutness. Here, in Rivera’s poems, we have an insistent sense of the speaker’s distribution through and dispersal by a set of perceptions, sensations, and textual encounters. And it is through these distributions and dispersals that we realize the subject, too, is in fact scaffolded by those with whom they enter into contact. Like George Oppen before her, Rivera is an ethicist who wishes to reveal a phenomenology of relation—with things, with other beings, with people, and with a (real and imagined) locale. Scaffolding gets at the ground under our feet—a ground constituted not by being itself but by being-in-relation. It shows not just what stands, but that upon which it rests, the inextricable and at times reversible relations shared between ourselves and other beings—within the field of the poem and the world. Remaining in perpetual motion through Rivera’s careful attention to lineation with sparing uses of punctuation and spacing, we experience the world not as a static entity but an evolving series of particulars inviting our participation as well as our inculcation—a sense that we are responsible for the world’s making. Writing through a reduced vocabulary, however an expansive prosody, we hear the “self” largely as a construction of sound, stress, and idiom. Much in the way we make our way through the urban spaces they describe (the principal one being that of Morningside Heights, Manhattan), we read the poems reiteratively and ergodically. To tread and retread their pathways is to encounter the world with ever- refreshed attention and insight.


From Scaffolding by Eléna Rivera

surface ellipses … a kind of tropism …
it always depends on the definition—
Fragaria “wild strawberry” noun and root
and perhaps, more and more, torn by lack of time
for ecstasy—we are tempted (you see this
everywhere, hear of its little importance)
point to poetry, the place where the parts are!
(instead of living the parenthetical)
(instead of this race toward emptiness, this race
that masks our insignificance, our “false fruit”)
(judgment too repeatedly wears us out our
seeds, I heard “What do you expect at your age”)
(the early stages of metamorphosis)
she bit into the soft sweet red fruit and missed

Surface tension, growth … a kind of tropism …
the early stages of metamorphosis
depend on the body and definition—
Fragaria “wild strawberry” noun and root—
Remind the young girl tempted by ecstasy
that fantasy is a fragrance, shame clings to
the changes of the body—blood running down
and pee pushed her to the parenthetical—
That weighing in, comparing size shape, the change
How games put forward the questions of “better”
and fruit when bruised by too much judgment retreats
“What do you expect at your age”—early stage—
then came to poetry, the place where parts are
is a soft sweet red fruit that I missed and miss

Thom Donovan is the author of numerous books including Withdrawn (Compline, 2017), The Hole (Displaced Press, 2012) and Withdrawn: a Discourse (Shifter, 2016). He co-edits and publishes ON Contemporary Practice. He is also the editor of Occupy Poetics (Essay Press, 2015); To Look At The Sea Is To Become What One Is: an Etel Adnan Reader (with Brandon Shimoda; Nightboat Books, 2014), Supple Science: a Robert Kocik Primer (with Michael Cross; ON Contemporary Practice, 2013), and Wild Horses Of Fire. He is currently an Assistant Professor of Literary Studies at Eugene Lang College of Liberal Arts.