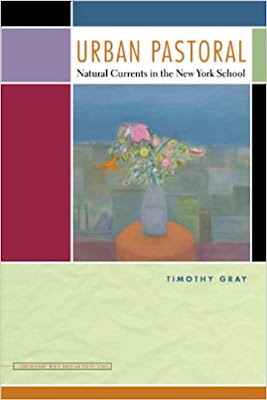 In the early 1950s the painter Robert Motherwell casually referred to a group of young writers and artists living in New York City as “The New York School”. From that moment on, the appellation took hold. It became the label by which Frank O’Hara, John Ashbery, Barbara Guest, James Schuyler and Kenneth Koch became known even though they resisted being “tagged” in this way. In time, the name became a form of identity that is still used today to refer to the generations of poets and artists who have succeeded them. Regardless of the label used to describe them, they were fiercely independent in their aesthetic allegiances but they were bound together by ties of friendship and the mutual respect they showed for each other’s work and the work of other artists in and around New York City.

Given this background, a consideration of the urban pastoral (which is almost a contradiction in itself) makes this book all the more intriguing. In it, Gray gives us a fresh perspective on their work. Gray says that he first heard this provocative term twenty years ago when it was first mooted by David Perkins in a Harvard lecture on Frank O’Hara and James Merrill. To Gray, “urban pastoral often refers to a cosmopolitan retreat conducive to the development of aesthetic experimentation and countercultural community, though as evident throughout this book, it refers as well to the natural sensibilities city writers secretly harbour.”  The main argument of this book is devoted to the second aspect of urban pastoral where he argues that the poets of the New York School should be placed alongside contemporary American nature writers such as Annie Dillard, Wendell Berry and Mary Oliver.  Gray shakes up our common conception of what constitutes nature writing.  At one point he states that “flowers are more beautiful in their garden of verses because no one expects them to bloom there.”

In his introduction, he explores traditional definitions of town and country and people’s perceptions, attitudes and experiences to both.

Separate chapters follow which discuss the work of each of the poets in turn. They can be read in any order as they are relatively independent of each other.  The approach that Gray chooses to adopt with respect to each poet differs in emphasis with regard to subject-matter. The chapter on O’Hara, for example, focusses mainly on art rather than poetry (he was, after all, a museum curator and an art critic, as well as a poet), whereas the chapter on John Ashbery (who was also very much involved in the art world) concentrates more on his poetry.  Early on, Gray points out that the book is also as much about painting as it is about literature. His focus on the art scene is particularly prominent in chapter 4 which is partly given over to a discussion of the work of the painter Jane Freilicher. The focus shifts again when Gray considers Kenneth Koch’s work with school children and Diane di Prima’s foray into the world of the Beats. By the end of the book we are in the Plains of Dakota with writer Kathleen Norris.

“Pastoral” means different things to different people. For O’Hara, special realms that became pastoral havens were places where freedom was to be found. O’Hara’s escape route from the city was the archetypical escape to the beach.  In an epistolary poem to Jasper Johns he says “I want someday / to have a fire-escape // in 1951 I became crazy for fire-escapes / as you remember.”  Gray postulates that the “fire-escape” could well be Fire Island, “a pastoral site” where O’Hara could go to escape the attention he had attracted in New York City since his arrival there in 1951.

For Ashbery, “pastoral” is very much bound up with memory , in this case, the memory of his rural childhood on the family fruit farm near Lake Ontario. It was a region he dubbed the “Holy Land / of western New York State.” Later, Ashbery claimed that “much of my poetry comes out of memories of childhood, the feeling of some lost world that can’t be recovered.”   Discussing such seminal poems as “The Picture of Little J. A. in a Prospect of Flowers,” “Self-Portrait in a Convex Mirror,” and “At North Farm” Gray argues that, although Ashbery’s poetry is “attuned to the transitory nature of ‘logarithmic’ New York City…closer inspection indicates that it remains anchored in rural landscapes.”

It is particularly gratifying to see a chapter devoted to Barbara Guest who, until the publication of her Selected Poems in 1995, had been significantly overlooked even though the other poets of the New York School admired her poetry and she admired theirs.  In this chapter we return to the coastline. Guest spent most of her childhood in the coastal states of Florida and California before moving to Los Angeles when she was ten and then on to New York in her twenties. Focussing on specific poems, Gray shows how images of the sky and the sea and water in general – especially “urban rainfall”– became deeply entrenched in her work. Guest had a particular gift for being able to express how these elements had the capacity to alter human relationships and affect mood, especially in the city. Nowhere is this more obvious than in her poem “Parachutes, My Love, Could Carry Us Higher,” where Guest – with recourse to both images of sky and sea “investigates an environmental indeterminacy felt acutely by those in love.”

In the fourth chapter, Gray explores the work of writer James Schuyler and artist Jane Freilicher, whose painting Harmonic Convergence (2008) is on the book cover. Although they worked independently of each other, they share the same chapter because, according to Gray’s estimation, something set their work apart from the rest of the New York School. Like O’Hara, Ashbery and Guest, Schuyler wrote a considerable amount of art criticism for Art News and Art and Literature but there the resemblance ended. He argues how Schuyler’s work “provides us with a great window on New York that is less abstract than Ashbery or Guest” but qualifies this to some extent by going on to explore the degree to which “tension and ingenuity lurk beneath its shimmering simplicity.” Similarly, unlike O’Hara’s reflections on the frenetic pace of life in the city, Freilicher’s paintings “soften the edge of urban architecture, making the city seem like a more peaceful place.”

Kenneth Koch’s seminal work with school children is examined in chapter five. His infectious sense of humor, which earned him the nickname “Doctor Fun,” and his openness to, and encouragement of, new modes of expression, made him ideally suited to this type of work. Koch urged children to reconsider their familiar surroundings and place them in imaginative contexts that dislocated them from their territory. He made them see things in a new way.  According to Koch, having city kids implement avant-garde techniques in their own writing was not as impossible as some experts feared, “since children aren’t bothered by the same kinds of difficulties in poetry that adults are bothered by ….they have an advantage over some more educated readers whose fear of not understanding every detail of a poem can keep them from enjoying it at all.”

Diane di Prima, described as “a second generation Beat writer tangentially connected to the New York School – largely due to the friendship she forged with Frank O’Hara- is the subject of the next chapter. Here, Gray offers us a fascinating account of one woman’s journey in a largely male-dominated preserve that starts out in the city and then spreads progressively west. He shows how di Prima lead the way for second generation New York School writers who, by the end of the sixties, were gravitating to places like Bolinas, California, and Boulder, Colorado (Home of the Naropa Institute). Reading this chapter one gets the impression that di Prima was always on the road. At one point, she and her family embarked on a 20,000 mile reading tour across America to establish new alliances and experience some sense of personal freedom which she achieved through many mediums, not just the arts but also through experimenting with various forms of eastern religious practices. In Gray’s words, “di Prima’s city skin [fell] away as she [became] infused with the light of wide-open spaces.”  She found happiness in unrestricted movement across a vast landscape enjoying close contact with all whom she met.

The final chapter is given over to an account of the New York underground movement which centres around Andy Warhol, Joe Carroll and Kathleen Norris with a particular focus on the latter’s “escape” to the plains of Dakota. In “The Middle of the World” Norris calls the Plains an “inland sea” where she implies that the Midwest’s desolate landlocked “sea” is responsible for her own religious conversion. Like di Prima and Guest, she has a life both inside and outside the city. She claims that she is conscious of carrying the silence of the Plains with her into cities and of carrying her experiences in the city back to the Plains so that they may be absorbed back into silence. In common with all of the writers and artists discussed in this volume she is proof that there are literary and artistic possibilities to be experienced in quiet, out-of-the-way places.

This is a first book-length scholarly account of urban pastoral in the New York School. It is accessible, erudite and beautifully written. Fully recommended.

Neil Leadbeater is an author, essayist, poet and critic living in Edinburgh, Scotland. His short stories, articles and poems have been published widely in anthologies and journals both at home and abroad. His books include Librettos for the Black Madonna (White Adder Press, 2011); The Worcester Fragments (Original Plus, 2013); The Loveliest Vein of Our Lives (Poetry Space, 2014) and Finding the River Horse (Littoral Press, 2017).