A LONG AND HARD NIGHT TROUBLED BY VISIONS by TOM JENKS 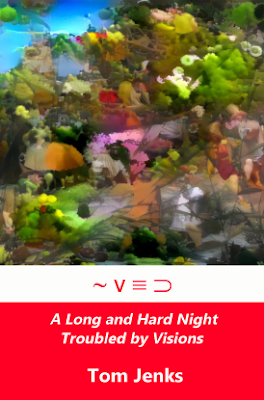 Tom Jenks’ A Long and Hard Night Troubled by Visions was published in 2018 by if p then q.  Described by Jenks on his webpage (zshboo.org) as a ‘New book of prose, short and shorter’, it is his fourth book with if p then q, the previous three being A Priori, *, and Items.

Jenks’ categorisation of his writing in this book as ‘prose’ is very interesting to me. When I am not actually reading the book, but rather reflecting on it, the question whether his writing feels more like prose or poetry sometimes presents itself. This question might then expand into further thoughts about the differences between prose and poetry, and how ‘prose poetry’ might be distinguished from its component genres. However when I am reading A Long and Hard Night Troubled by Visions, these kinds of theoretical questions drop away. In fact, I have forgotten they ever existed. Whether prose, poetry or something else, the text is all there is and all I am is engaged with it. It is, due to the emotional and physical reactions it stimulates, a primal experience to read the text. It is, at the same time, an intensely cognitive experience to read it. This multi-level simultaneity of responsiveness might account for the ‘humming’ sensation I feel inside when I am reading this book.

===
I love the title ‘A Long and Hard Night Troubled by Visions’; its fusion of generous length with succinctness, what it says and how it sounds. One particular aspect of the title I greatly enjoy is its inclusion (rather than exclusion, perhaps in favour of a comma, or of nothing at all) of the word ‘and’. I like the elongating effect which the ‘and’ has on the title’s meaning and rhythm. Its inclusion also appeals to me as a challenge to, or refutation of, any idea that effective writing must somehow involve a paring away of words in a quest for concision.

Saying these things about the title in particular reminds me more generally of a unique quality of Jenks’ writing throughout the book; namely its utterly magical combination of a cornucopia of imaginative content with a spareness of linguistic expression. Jenks’ mode of delivery is beautifully understated, honed and sleek; a mode which only intensifies the impact of the abundance of gifts which it is delivering.


The book’s cover image is described as a ‘treatment of Richard Dadd’s The Fairy Feller’s Master-Stroke by Tom Jenks’.  I very much enjoy the way the word ‘treatment’ declines explanatory specifics in favour of evocative generality. When looking at the image I can discern, amongst the soft articulations of intense colour and shadow, shapely, ghost-like residues of the original painting from which it has emerged. 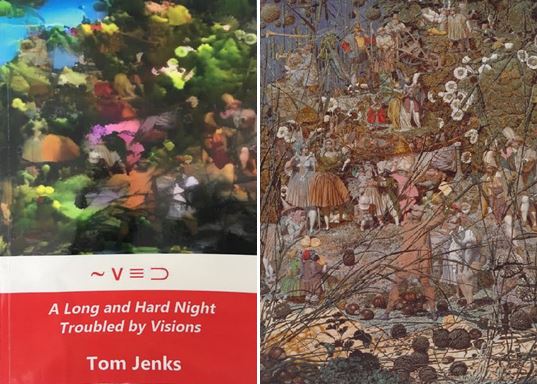 When I first viewed the cover I was reminded of childhood experiences of peering into a view-finder or a kaleidoscope in which sharp-edged geometry has dissolved into mellifluous interactivities of shape and hue. There is also an aquarium-like feel;  a sense of motion under the influence of gentle currents. A density and complexity of objects is apparent, objects both potently present and strangely unidentifiable as to their specific natures.

The cover image strongly suggests three-dimensionality but feels slightly shallower than the depth my eyes seem to expect. This results in a tension in my visual response, one which prolongs the engagement and makes it even more enjoyable.

===
I have had trouble settling on an approach to sharing my engagement with the book’s sections and individual pieces. I am not able to make descriptive remarks or thematic summaries which are capable of conveying the brilliance of this work or of the staggering imagination from which it has come. But even if I were able to say something usefully indicative, I would still feel there was no substitute for experiencing the text directly. I very much want to share the writing by showing it. Thus I thought I would make some observations about the book’s structure and then paste in some extracts from the book.

A Long and Hard Night Troubled by Visions is 115 pages long. Its list of contents, which occupies 3 pages, consists of 4 section-titles and 72 piece-titles. The 4 section-titles, which I immediately want to arrange in the form of a list poem, are:

Shrinks,
The Strawberry Moshi Collection,
Topaz,
and The Dysphoria Suite.

The pieces in Shrinks, Topaz and The Strawberry Moshi Collection are single-paragraphed. The Strawberry Moshi Collection is, in Jenks’ words, ‘assembled from text found in Moshimoshikawaii: The Strawberry Moshi Collection (Walker Books, 2011)’. The Dysphoria Suite contains three pieces, ‘cockatiels’ ‘rabbits’ and ‘strikes’, each of which is longer than the pieces in the other sections. Of ‘cockatiels’ and ‘rabbits’ Jenks writes, again on zshboo.org: ‘both of these pieces result from an approach to writing I'm using more and more, utilising found material as I have done before, but less schematically, interweaving it with written material to create something that is both and neither.’ And of ‘strikes’, he writes that the piece ‘documents every instance of smoking in season 2 of Mad Men’. 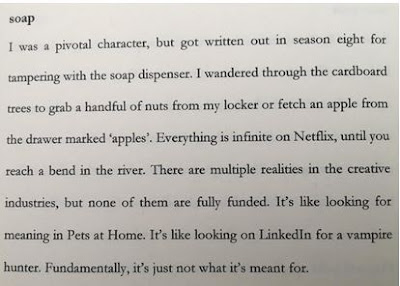 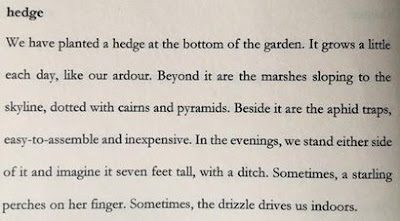 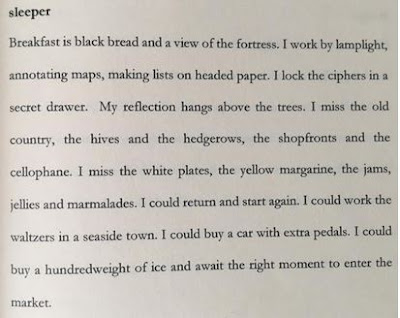 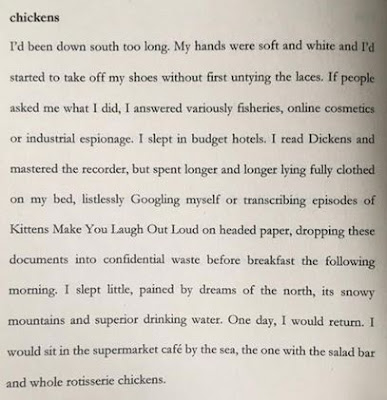 From The Strawberry Moshi Collection: 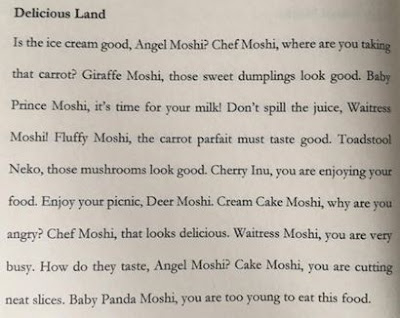 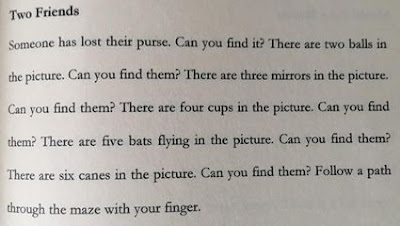 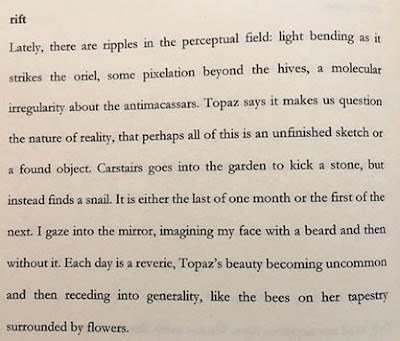 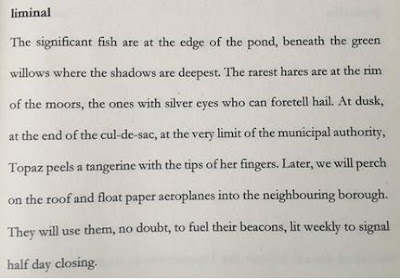 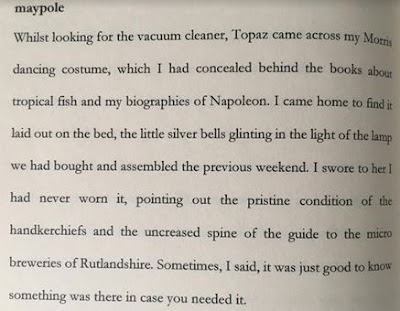 ‘cockatiels’ and ‘rabbits’ can be found in the magazines below:

‘rabbits’ in The Wild Hunt:
https://wildhuntmag.com/fiction/tomjenks-rabbit 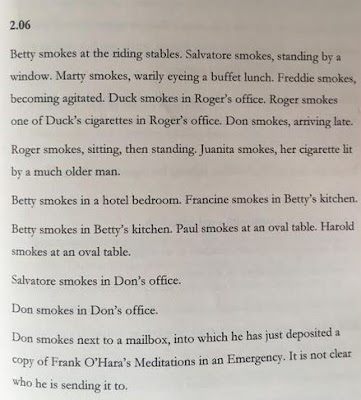 I will try to say two things in conclusion: One is that A Long and Hard Night Troubled by Visions is a treasure chest which I open again and again. The other is that, for me, reading this book is to be both propelled and delayed. Countless times, particularly upon reading the concluding line of a piece, I have found myself lifting my head from the page to stare across the room, full to the brim, trying to process all that has been communicated in what feels like an unfathomably disproportionate number of words, and at the same time revelling in my inability to do so, enjoying so much the experience of wonder.  But I cannot maintain this state for long. The desire to read the next piece is inevitably irresistible; it tips the balance and once again I am engaging with the text.

if p then q webpage for A Long and Hard Night Troubled by Visions:
https://ifpthenq.co.uk/books/jenks-tom-a-long-and-hard-night-troubled-by-visions/

if p then q link to sample pages from the book:

A Long and Hard Night Troubled by Visions reviewed by Steve Spence in Litter Magazine:
http://www.leafepress.com/litter11/spence6/spence6.html