AUTOBIOGRAPHY OF DEATH by KIM HYESOON 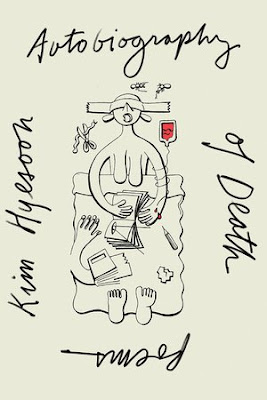 Kim Hyesoon’s visceral poetry, rooted in the body and spirit-world, channeling rage and disintegration, speaks here as the dead, as death itself, one poem for each of the 49 days the dead wander before rebirth, followed by Face of Rhythm, a long poem immersed in physical pain and attempts at diagnosis/alleviation.

The death poems are haunted by the drowned children of the Sewol Ferry tragedy which still haunts Korea. They are also haunted by war dead, demonstrators mowed down by the government, and the suffering from a millennium of occupation, threats of occupation, and functioning in various states of vassalage to stronger powers.

All refracted through individual bodies/lives which disintegrate, reshape themselves, are invaded by and themselves invade other bodies/beings — In the corner of Mommy’s heart, a small black vole lifts its head — always focused on the particular, not on anyone’s story-line. Boundaries disappear.  The mundane and the fantastic are indistinguishable. At times the dead and their mourners are indistinguishable. At times the dead don’t know they are dead. They crinkle paper. They sing. They do the dishes. They beg to be let in. Nothing is fixed. Nothing is what it is supposed to be: The thing that death gave you — /your face leaks/your face overflows. The dead — always addressed as you — are very specific. Grandmothers. Mothers (usually called Mommy). Children. Lovers. Now you have completely taken off your face. On day 28:
You are already born inside death
(echoes 49 times)

On the last day, day 49: The warm buoyant breaths don't miss you.

Face of Rhythm, informed by a medical crisis, is a close inspection of what pain actually is — Better to die than to live with pain. Boundaryless interpenetration
Whale floats about inside my black pupil
Whale drags me
to inside far away from myself

line after remarkable line— Every time an egg breaks, a deformed crow flies out — the opposite of imagination, the precise delineation of a literally unspeakable reality.

Buddhist influence, Christian influence, Confucian influence and, especially, shamanic influence (see Kim’s book Princess Abandoned) permeate Kim’s works. She is the most eminent of several Korean women poets (see Don Mee Choi’s anthology Anxiety of Words) who dive deeply into places the rest of us don’t or cannot go. What they bring back can, if paid attention to, explode the fabric of our lives.

Mention must be made of the translator, Don Mee Choi, herself an excellent Korean-American poet, whose dedication to Kim Hyesoon and other contemporary Korean poets, brings to literature in English a remarkable body of work that should be more widely known. Autobiography of Death ends with an illuminating interview between Choi and Kim and a translator’s note from Choi. It is illustrated by Kim’s daughter, Fi Jae Lee, whose line drawings, informed by graffiti and animé, match the shape-shifting work of her mother.