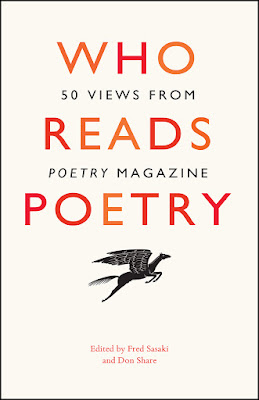 Fred Sasaki edits Poetry magazine’s prose feature The View from Here, from which the essays in this book are gathered. He is the art director of Poetry magazine and a gallery curator at the Poetry Foundation.  He is the author of Real Life Emails, a book of deluded emails, and the zine series FRED SASAKI’S AND FRED SASAKI’S FOUR-PAGER GUIDE TO: HOW TO FIX YOU. In 2004 he founded the Chicago Printers Ball, an annual celebration of poetry and printmaking. He is also co-founder of the Homeroom 101 pop and subculture show.

Don Share is the editor of Poetry magazine. Among his twelve books are Wishbone, Union and Bunting’s Persia. He edited a critical edition of Basil Bunting’s poems which was named a Book of the Year by the Times of London and the New Statesman. Miguel Hernández, his book of translations, was awarded the Times Literary Supplement Translation Prize and Premio Valle Inclán. His other books include Seneca in English, Squandermania and The Open Door: 100 Poems, 100 Years of “Poetry” Magazine. He received a VIDA “VIDO” Award for his contributions to American literature and the literary community.

What do a clinical professor in neurosurgery at the University of Washington’s School of Medicine, a retired US Army three-star lieutenant general, a professor of economics at Roosevelt University, a curator at the Museum of Contemporary Art in Chicago, and a retired member of an Ironworkers’ Local Union in Detroit have in common?  The answer is that they all read poetry.

We all know that poets are avid readers of poetry, but what about others? When and why do they connect with poetry? To answer this question Poetry magazine has been running an occasional column called The View from Here which invites readers from outside of the world of poetry to describe what it is that makes them relate to poetry.  During this time, contributors from a wide range of professions have responded with their own personal take on the subject.  This collection, which is dedicated to the founding benefactor of Poetry magazine, Harriet Monroe, brings together fifty of the most compelling contributions which are often surprising, always uplifting and, as far as the future of poetry is concerned, very reassuring.

In the introduction Don Share reveals how the contents of this book turn the tables on the notion that poetry and daily life are somehow incompatible, that poetry is something that is “elevated” scarcely encountered, possibly irrelevant and probably dead. On the contrary, the essays in this book show that poetry connects deeply with people’s lives and in some cases with their professions. In short, it is a riposte to the charges made against poetry today.

Many of the contributors write about their first encounters with poetry. In most cases these were in elementary school where they were introduced to a specific poem and given insight into its meaning. In some instances they may been asked to commit the poem to memory and then recite it back to the class. Some of these recitations have remained in the memory ever since and are a testament to the power of both the memory and the poem.  Iain McGilchrist, a psychiatrist and philosopher and former clinical director at the Bethlem Royal and Maudsley Hospital, London writes that “poetry engraves itself in the brain: it doesn’t just slip smoothly over the cortex as language normally does. It has all the graininess of life, as it rips into being from deep within the limbic system, the ancient seat of awareness and affective meaning.” Another contributor, Josh Warn, a retired Ironworker, puts it like this: “a good solid poem in your cortex can be almost like ballast in a ship’s hold. If turbulent mental activity surges, speaking a poem to oneself can be a way to even out the waves. I first learned this through my practice of memorising Psalms.”

Others explore some of their favourite poems and share their own particular take on them with the reader. Interestingly, some of the correspondents seek to draw a connection with their own profession. Jeffrey Brown, senior correspondent for PBS Newshour writes: “literature has long provided me with a connection, a way in. I have seen the world, travelled the world through poetry and learned much from it of the power and process of giving an account.” Cellist Nicholas Photinos reveals that he named his music ensemble, “Eighth Blackbird” after reading Wallace Stevens’ “Thirteen Ways of Looking at a Blackbird” and actor Alfred Molina states that he reads poetry as a means to finding the voice of a character.

Some of the contributors attempt a definition of poetry. Inevitably such statements are wide ranging but taken as a whole they give us a feel for what poetry means for them. For Scottish singer-songwriter MOMUS (Nick Currie) poetry is “the artistic use of short bursts of language”, for the artist Ai Weiwei it is something that “transports us to another place, away from the moment, away from our circumstances”, and for Etienne Ndayishimiye, a Twa parliamentarian in the East Central African nation of Burundi, “there is a belief that poetry can make things happen, especially as an articulation of our deepest heartaches and longings.”

William James Lennox Jr, a former superintendent of the US Military Academy at West Point from 2001-2006, writes of how, in the small classrooms of West Point, “young cadets consider war through the eyes of Rudyard Kipling, Carl Sandburg and John McCrae.”  Exposure to poetry – “sixteen weeks studying the likes of simile, irony, rhyme and metre” - in this context is viewed as an integral learning tool for the pragmatic realities of discipline, integrity and leadership.

For me, one of the most interesting contributions came from Matt Fitzgerald, senior pastor of Saint Paul’s United Church of Christ in Chicago, who drew a comparison between great poetry and the parables of Jesus. Like the parables, great poems remind us of our inability to ever truly understand. And that is where the strength of poetry lies. It says the unsayable, it attempts the impenetrable, it delights us with its elusive quality and makes us return to it again and again.

Credit should go to Fred Sasaki, Don Share and the staff of the University of Chicago Press for their role in creating this anthology. A generous section at the back of the book sets out the biographical details of all the contributors.  Fully recommended.

Neil Leadbeater is an editor, author, essayist and critic living in Edinburgh, Scotland. His short stories, articles and poems have been published widely in anthologies and journals both at home and abroad. His publications include Librettos for the Black Madonna (White Adder Press, Scotland, 2011); The Worcester Fragments (Original Plus Press, England, 2013); The Loveliest Vein of Our Lives (Poetry Space, England, 2014), Grease-banding the Apple Trees (Rafaelli Editore, Rimini, Italy), Finding the River Horse (Littoral Press, 2017) and Punching Cork Stoppers (Original Press, 2018). His work has been translated into Dutch, Romanian, Spanish and Swedish.