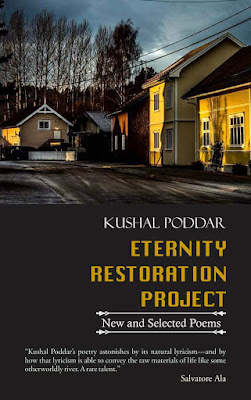 “If I open my mouth my tongue will fly out with a hoot.” writes the poet (45). It is through language that poetry transmutes into magic, magic that is as ancient as the gothic. When in 1917 Ezra pound declared that “no good poetry is ever written in a manner twenty years old” he perhaps forgot that the kind of poetry that is magic never becomes old. The English Romantics replaced philosophy with poetry to ascend the heavens and thereby took poetry from the realm of art to the realm of magic. It is in the language of magic that the poet can inhale the sun and “sigh out” (50) his shade. It is in the language of magic that “Eternity Restoration Project” takes place:

Planks of light build a house,
another, another,
and a colony is built.
Windows breathe.
Two children freeze a ball
in between them.
All night the boy pasted posters
on every wall –
Soon. Eternity is coming. (68)

Kushal Poddar has rediscovered the language of magic.

Language is not a rigid and singular entity. Just as it has space for various dialects, it also has space for various registers. In English there are definite registers for religious rituals, technical communication, legal correspondence, medical study, academic discourse, journalistic reportage, creative writing in various genres, and so on. To discover a new register is a challenge perhaps equal to that of creating a new symphony in music. Kushal Poddar has done exactly that. He has taken elements from the ancient gothic and put them in arrangements of the modern to derive a new composition, which forms the language of magic. And he has done so consistently. The poetry that we read in Eternity Restoration Project echoes the eternal because it has something that is there in our subconscious, the mystery and the awe, the fear and the agape. A poem may suddenly leap out of nowhere and go for the jugular like the lioness – perhaps that same lioness who is kept hungry all day and persuaded to do tricks in “Reading In-between” and you are asked to be her cub assuming she will not know the difference.

Magic exists. Magic exists in the language. This language of magic is perennial in Kushal Poddar’s verse as is evident in the selected poems of Scratches Within (2016), Knowing Your Neighbourhood (2015), A Place for Your Ghost Animals (2015) as well as in the new poems in this volume. Poddar’s poetry displays an aesthetics of magic that is difficult to describe and can only be experienced. This aesthetics is not a presence of something but an absence of anything that can destroy the experience. It is very much like the missing sorrow in “Birds”:

Today the sorrow didn’t come.
I waited for its swash,
miniscule footmarks.
I miss its steady hungry urgent chirping.

Truly, a wonderful life is what we experience when we read Poddar’s poems filled with a latent undercurrent of grief and an expression of it that is devoid of any jarring note, like a symphony. His poetry is like a nebula skirting a black hole at a tangent. It is this moment of flirting with the dark, mysterious, mindless and alien wherein lies the magic, a magic as ancient as the gothic.

Let us take the poem “Moon” and try to see how that magic works and why it works. It starts with the astonishing lines “My cousin’s laughter leaps/ from my uncle’s fifth floor” taking us perilously close to the precipice of a memory of suicide perhaps, but it can also be an instigation to the reader’s own sinister love of death. The stanza ends in the third line: “Moon muffles my scream.” It is this deliberate act of unexpressing – the muffling – that creates the mystery. The result is that “On the cornice grows weeds of silence” at the opening of the new stanza. The silence indicates a kind of remoteness as well as muteness. But “It cracks the code of bricks.” So, even silence has its teeth to unlock an enigma. And “The crevice whistles when wind/ journeys to the heart of the room.” If this is not a gothic setting, then what is? And yet this is the modern, the contemporary, as if a woman wailing for her demon lover has time travelled into the present. The next stanza starts with the evocation to the moon and a name that together deepens the mystery: “You love the moon, Mou? There is/ no remedy for that…”  Yes, there is no remedy for the past is revisiting in the language of the present. What is to come now? “…Sometimes/ I breathe through my heart/ and let my lungs pump out blood/ through my nose.” The surreal is here: we are taken into the strange unknown where hearts breathe and lungs pump blood. It is the apocalypse! But the magic continues and amazingly the last stanza makes the extraordinary the commonplace:

Sometimes I know without seeing
how you stoop to mop the red
and instead pick up the pieces
of moonshine from the floor. (18)

The age of magic has dawned in the language of Kushal Poddar’s poetry. We live it in our daily lives without realizing it. It is the poet who notices it and brings it to our realization. Magic is lurking at every corner of our existence and the diminishing of our grief is a manifestation of it. We had forgotten the language of its expression. Thanks to the poet that he restores it to us.

It is only in the language of magic eternity is possible. For eternity is not something that can be conceived or imagined but can only be restored. Under the life of things lies eternity, always. Planks of light, houses, colonies, windows, all submerge eternity until the poet comes to its rescue and digs it out from under the ruins like a frozen ball of time and eternity is restored. Kushal Poddar is that poet – the magician whose language of magic says “Eternity is coming” and you actually look forward to it although paradoxically in gothic fear.

Dr. Amit Shankar Saha is an Assistant Professor in the Department of English at Seacom Skills University. He is also an award-winning short story writer and poet. He has won the Poiesis Award for Excellence in Literature (2015) and Wordweavers Prize (Poetry-2011, Short Story-2014) amongst other awards. He is the co-founder of Rhythm Divine Poets and the Media Subcommittee Chairperson of Intercultural Poetry and Performance Library. He is also on the Editorial Boards of many publications. He has been invited to read his works at many events and forums including the Sahitya Akademi. His articles, stories and poems have appeared in newspapers, magazines, journals and anthologies nationally and internationally including Best Indian Poetry 2018 anthology. He has co-edited a collection of short stories titled Dynami Zois: Life Force and authored a collection of poems titled Balconies of Time.