LIKE A SOLID TO A SHADOW by JANICE LOBO SAPIGAO 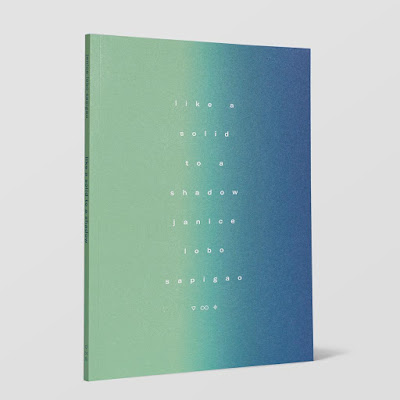 like a solid to a shadow by Janice Lobo Sapigao
(Timeless, Infinite Light, Oakland, 2017)

Those writings came to form the core of a book released just a year later, THE LIGHT SANG AS IT LEFT YOUR EYES: Our Autobiography (New York. Marsh Hawk Press, 2007). It’s also a book that I was never comfortable promoting (though I felt I had to market it in fairness to its publisher). I wrote it in a fever. I published it in a fever. When the fever would come to abate (something that didn’t begin abating for over a year after my father died), I came to second-guess my decisions about the book. I second-guessed it even as I couldn’t read it for a long time. I wrote it, published it, but found it too difficult to read it from beginning to end.

Its readers would tell me things like it was their favorite book among those I’d written. One paid it the highest compliment of how it helped her come to terms with her own father’s death. It received several positive reviews. But it was difficult for me to read it.

I could go on. But this article is not supposed to be about my book. It’s supposed to be about another book: Janice Lobo Sapigao’s like a solid to a shadow. I apologize now for first taking up time about my book—but such is the power of like a solid to a shadow that it turned me towards a book whose existence I’d actually tried to ignore for nearly a decade. My first act after finishing my first read of Sapigao’s book was to go to the basement, find the box where I’d kept my copies, and bring out several copies of the book I wrote for my father. In a ceremony witnessed only by my dog Ajax, I brought that book out into the light. I now know I shall read it again, acknowledge my grief but also acknowledge my love for my father. As of the day I read like a solid to a shadow, my own book about my father thrives on my bookshelf rather than in a closed box in a dim basement. Thank you, Janice Lobo Sapigao.

like a solid to a shadow also is about grieving a father’s death as well as grieving a father.  Sapigao’s father died when she was six years old. Part of the impetus for Sapigao’s project was transcribing cassette tapes of love letters sent by her father to her mother during their courting days. Complicating the project was how her father spoke in Ilokano and Sapigao's lack of fluency in this language.

What’s admirable about Sapigao’s project are, among others, its many layers of complexity, including its address of translation. Translation is a fitting layer since the entire poetic project, if as also as means to “find” her father, is translation. Specifically, it is “ultratanslation” which can be described in this quote from Antena that Sapigao highlights as one of the epigraphs in the book:

“Ultratranslation—an awareness or hum or breath … moments within translation, a part of translation parting it to expose the irreducible gaps.”

And the poems are evocative, e.g.

begin
the line you drag across the paper
fumbles over itself; from a cloak somewhere
and nowhere at the same time

I know enough Ilokano to know the words “ragsak” and “rugi” and appreciate Sapigao’s witty redefinitions. Sapigao’s poems also befit its theme if the title can be a theme. Here’s an example that deftly generates reader empathy as it moves from abstraction ("to go left") to something concrete (no pun intended):

“katigid” is another one of the poems that begin with an Ilokano word which Sapigao then poetically defines, and defines within the stated concerns of her book which presents an archaeological search for her father.

“Poetically define,” I say, and yet what I’m talking about again is translation. As Sapigao notes in her poem “Where My Name Is From,”

My last name Sapigao means ‘wait until you’re 24 to do enough research, to ask questions, to wait and find out that it only means ‘nuts.’ ‘Nuts of the bird.’ Sapigao means ‘pretend it means seeds, seeds of a bird.’ Then poeticize the bird, let it fly. Then poeticize the seeds, ‘I am the seed of a bird that flies.’ My dad flies. My dad is the bird. I carry his name far. I fly.

As the matter at hand is translation—including its impossibilities—it also makes sense that some poems are literally presented slant (click on all images to enlarge): 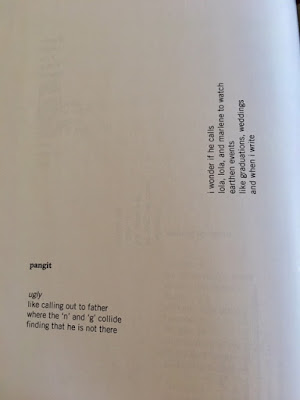 Somehow, that slanted quatrain ("i wonder if he calls / lola, lola, and marlene to watch / earthen events / like graduations, weddings / and when i write") is more … bludgeoning … because it’s at a slant. The form manifests its impossibility. For the father who died when the poet was six years old, there is no “he” (or who is the “he”) who witnesses graduations, weddings, “and when I write.”

And here’s another layer—the hierarchy between Tagalog versus the approximately 175 other languages that exist in the ancestral land, the Philippines (Tagalog, by being the language spoken in Manila and the capital Quezon City, also represents those who’ve had more power among the Filipinos): 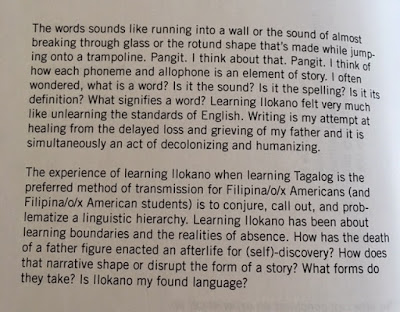 So there are politicized moments in the book, and yet its power also remains from the personal. This example below also presents another of the book’s strengths: how the visual enhances (meta imagism is the phrase that came to mind as I read/saw this page) as the words fade toward the end of the page: 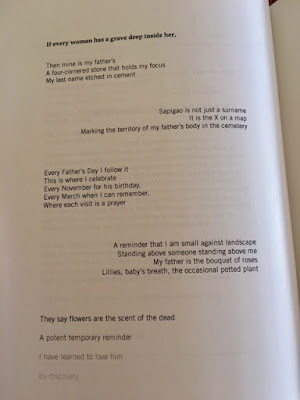 Politics cannot exist without history and the book also abounds with it – making it not just a personal narrative but an educational text: 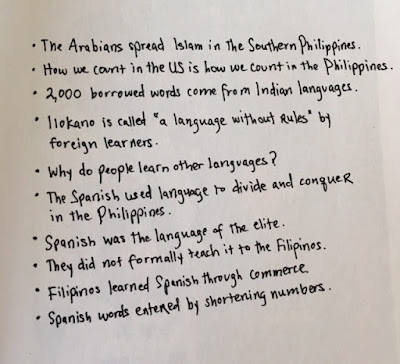 Last but not least, the poetry collection can read like a novel. There is a story in here that the poet did not know existed before she embarked on her “research.”  I was astonished by it, and so don’t want to  be a spoiler by revealing it, except to say that it relates to 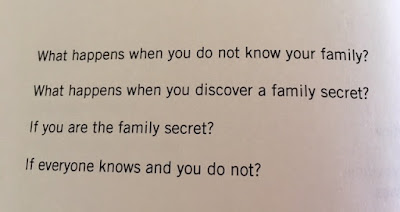 What I learned about being Ilokano: stubbornness, perseverance.  Stubborn Sapigao persevered and, in the process, created poetry as well as displayed courage. This book has an impact, such as the one I described for me. Its impact will be different, of course, for each reader. But, for me, the impact was powerful. I’ll end by sharing a photo of my father from my book—I actually had been challenged by a reader for sharing this image (as if it was a form of obscenity instead of a poet’s faltering/imperfect but determined attempt to hold on to her father): 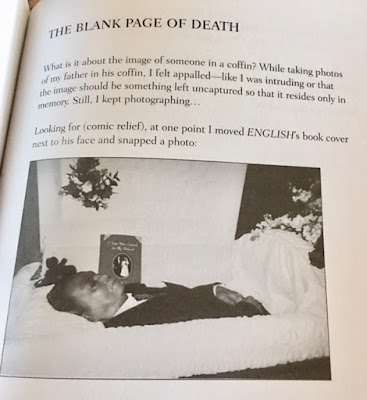 I shared the above image because of the ending—the last image—in Sapigao’s book: 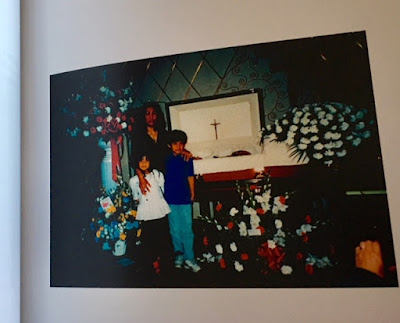 As a daughter who experienced her father’s death, I found affirmation in like a solid to a shadow—an affirmation such that I brought out from a basement’s shadows the book I wrote after and for my own father. It’s a response—and empathy—I (and no doubt other authors) would hope my (our) books generate in others. Sapigao saw me. And I, in this book, see her … and the family she moves me now to call mine. Such is the power of her poetry.