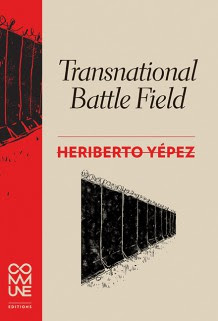 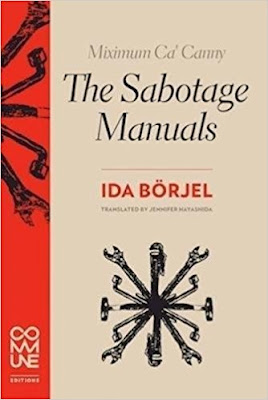 Parts of the Problem Staying on the Job

“Poetry is part of the problem,” writes/says  the poet formerly known as Heriberto Yepez in “Poetry in a Time of Crisis” (72), and he means it. He demonstrates it. He has explained it much more sharply elsewhere (“Notes” in 2015), but he explained it logically in his UCSC talk in 2004. His examples ran from Whitman to Bush. It’s the Bush part that shows his seriousness, and of course his humor even as he says: “Part of the problem is laughter” (73).

In a way Bush does poetry too.
I may say his poetry is bad but it’s poetry too.
Bush tries to cling to meaning. He tries to make the audience feel the ecstasy of words. He performs.
(72)

This approach to poetry is not new. We’ve seen it in Nicanor Parra
and others, but here we have poetry making itself of an anti-poetry that is not just charged with politically critiquing poetry but now with poetically critiquing politics. That makes it both fun and smart, apt and a crack-up especially when you’re trying not to laugh because the poet told you: poetry’s “not part of the solution but just part of the laughter” (73) and “’America’ is a comical nightmare” (74). He also says that “a post-colonial self-critique stance implies a going beyond ‘poetry’” (74).


So, let’s look at how that is done in this book, and then in another one by another writer using concepts of “sabotage.” Going beyond doesn’t mean going around; it implies a going through and getting beyond. It may imply a ”sabotage” of the old means. In Yépez’ case, the sabots are being hurled into the machinery of belief—and not just technique—in poetry. “Poetry should unveil where its authority comes from,” he asserts (75), and as poets we should “very openly contradict ourselves until the laughter stops, until there’s no credibility left in the authority we inherit or won ourselves, until it is made clear those who have authority have stolen it” (76).

In the poems in this book, we get a critical look at many things, from being inside crossing the border at Tijuana in a poem called “Nada. Nothing” that is insightful and almost funny, delivered in prosy sentences. We get a series of poems “on how | Mexicans and Americans | can know | they have | a body” that is more lyrical and yet also enters questions about language shifts, torture, and other attacks on bodies. We get another series called “A Song from and to the Native Informant” that mocks the scholarly, and a series that fits with that as it critiques “Ethopoetics” that reaches its sharpest point in a meditation on the assassination of Neruda (65). That set of poems begins with

What kind of poet
Can you make
OUT
OF
The poet
You were made
INTO?
(49)

and the Neruda poem, near the end, ends with

And what kind of poet
must you become in knowing
the CIA dictatorship killed Neruda?
(65)

Focus on discourses and critical thinking, especially regarding poetry’s place and role, replaces imagery in most of these poems. This is one of their ways of going beyond poetry. They are rhetorical poems in that way but they are not just rhetoric; they seek serious effects.

There are pieces that are clearly “criticism” as much as poetry, but of course they are criticism of poetry as we have known it. “Bad Tripping the White Dream Poem” is an extension of Yépez’ challenging book about Olson’s romanticizations of the Mexican Other (Empire), now (in 2015) focusing on Ferlinghetti as the voyager and intellectual conquistador. In a brilliant moment, Yépez parenthetically says: “(For practical purposes, I will call this military-complex lyrical subject here “Ferlinghetti.” But Ferlinghetti is not just Ferlinghetti)” (81). Maybe all of us poets should be perking our heads up here. Yépez goes through Ferlinghetti’s imagery to explicate his “Hegemonic Whiteness.” It is close reading that comes close to exploding as it explodes the Poet’s myths about himself and Others. At one point, Yépez appropriately compares Ferlinghetti’s writing to Hernán Cortés’ letters home from the “New World.” “It is precisely through poetry that the imperial gaze is justified, sublimated, and aestheticized.” Sharp.

That this book as a whole is very well composed becomes obvious as it next moves to a piece on Baraka’s defense of Olson against Yépez’ critique. Laughter returns as a central topic when Yépez quotes Alcalay’s introduction of Baraka at an Olson event and recounts the laughter at the expense of  ”whatever his name is”—“the ‘dude’ from Mexico.”

You and your audience can laugh
all you want. I’m Mexican.
North Americans, of all colors,
are State-trained to laugh at us.
I have heard that laughter
so many times
I have managed to break
some of its sounds down.

I can now, for instance, hear the pain
and the xenophobia co-giggling
along with the arrogance and self-sufficiency
of finding ridiculous any claim
about the existence of imperialist poets
in the USA.
(94)

You could both sing against them so tremendously
--suffering their attack—
and on the other and be even incapable
of hearing or repeating
a Mexican name.
(98)

The piece delivered as a talk at Buffalo’s conference on coming poetics in 2016 is here with only one illustration. I remember it but also others during the performance. It wasn’t just Goldsmith’s experimentalisms that Yépez attacked.

To separate experimentalism from national leukotropisms
Is historically impossible. The (Neo)Avant-Garde
And the Colonial Library are intertwined 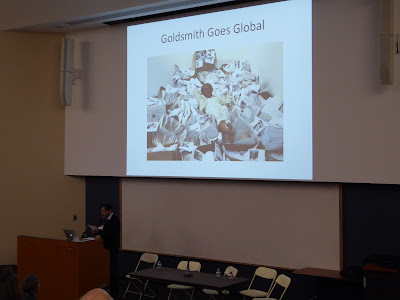 Once post-national and post-experimental
Take charge of new-writers’ bodies
“Exprimentalism” will not be the driving force of innovative poetics.
(110)

Back in the “Crisis” talk, he had begun: “I can only stand poetry in the context of prose” (71). By the end of the book, this makes more sense: it is an outside critical context that Yépez brings to poetry. It is not technical perfection or innovation. It may be a new function, or dysfunction.

Ida Börjel’s Commune book uses several techniques to bring in critical perspective and contradictory contexts that shift the function of poetry. The first couple of sections delightfully sourced from political pamphlets and factory-workers’ diaries, are fun to read and make sabotage seem like something we can do literally or metaphorically throughout our lives—even in poetry. The practical suggestions and strategies provide an imagery and reflection that seems poetic but is dedicated to interference. The book’s title comes from a passage in a poem called “Communication” that gathers ideas for messing with what the bosses want communicated. One goes:

Such bits make us chuckle, but mostly in wondering if we’d be so brave. As the book moves on, some sections are less brave, less funny, and less apt. One is allegorical and based on an odd occurrence of sabotage reported in Elizabeth Gurley Flynn’s IWW handbook: Sabotage: The Conscious Withdrawal of the Workers’ Industrial Efficiency. This reference is given at the end of the section, where it has the effect of making us look back and laugh instead of a better possible effect of having made us laugh all along. Börjel has taken her allegorical figures for personages in industry and Capital from Flynn’s anecdote about
printing-plant workers who mixed the story of a high mucky-muck’s speech at an international peace conference with the circus news: “they reported the lion and monkey as making speeches in the peace conference and the Honorable Mr. So-and-so doing trapeze acts in the circus” (65). Börjel has fun with this and makes some apt points about political and capitalist ways, but the fun hasn’t got all the focus it could have. It’s the first parts that are the strength of this book. There are even sabotage suggestions for executives. And the last pieces say a lot about the place of sabotage in our moral and ethical regimes:

Sometimes, the poet has to stay on the job. 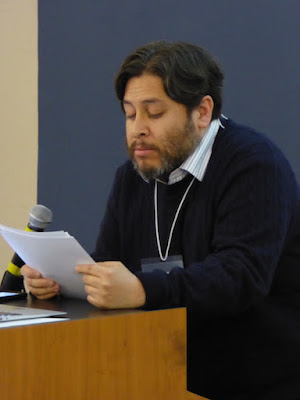 Photos of Heriberto Yépez, from the Buffalo conference on “Poetics: (The Next) 25 Years,” by T. C. Marshall

T. C. Marshall has never been retiring, but he will retire soon from teaching to take up the full-time work of knowing what he knows.