LOSSES OF LIFE by ERIC HOFFMAN 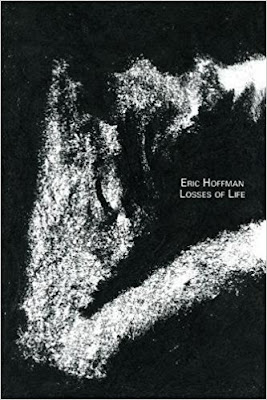 Forgive me Eric in being so long in getting back to you on Losses of Life which I have read carefully a number of times and enjoyed both the connections between your lament and Emerson's, as well as what separates them. The relationship of these two books within the book is an example of artful means. Child of Man, featuring the Emersonian voice you have put together from his diaries and other sources, resonates soundly against your own voice in Stations. As a man of his time, between TB and infant mortality, Emerson was awash in loss throughout his life—starting with his father’s death when he was eight, and then the loss of his three younger sisters, two beloved brothers, his first wife, and perhaps the most painful of all, in mid-life, his blue eyed toddler Waldo. You capture this in Emerson’s voice powerfully:
My boy, my boy is gone
My angel has vanished.
Fled from my arms like a dream,
And with him all that is glad
And festal and almost social even,
From me, from this world.

He goes on to remark in the second stanza, “All his beauty could not save him.” This is what makes Emerson unique, and I can’t help be struck by his largess—the apprehension of that beauty as a fragile value that can’t ward off, but survives even death.
He adorned the world like a morning star,
And every particular of my life.
I slept in his neighborhood and woke to find him.
(14)

In grief, Emerson reaches for abundance, finds it resonant in the loss and memory of his Waldo who "gave license to my fancy/ of magnifying each particular," that he embraces the face of his boy, as it "signified strength/ And gladdening, all uniting life." Holds it up like Buddha did a flower when asked for the meaning of life.
I am convinced as I have been for years that Emerson's mystical experience, perhaps while visiting the Jardins de Plantes in Paris, gave him a reference point that enlarged his perception for the rest of his life. He had been directly embraced by transcendence. Your work with his words is here, as always, is precise and moving in its distillation.


Your response to the human condition appears to hold up a rose to those in Deer Park waiting to hear Buddha explain the meaning of life.
Our love of the real
Draws us to permanence
Yet we anchor in quicksand (8)

But since I know the back story of Stations I can't help but read the work through a different lens. I take the title beyond what is suggested—a series of stops on a train journey, to also refer to the Biblical Stations of the Cross. I hear the pain of a crucifixion in many of these poems. Man is not only a golden possibility threading light "from darkness to darkness" but a vagabond who may discern along the way that the pain of Christ's physical wound pales in comparison to that of a "father's abandonment/ when desperate for his love." The human condition "a poverty of knowledge", the consolation for which is "to live in defiance of this." And experience offers little except in the Blakean sense as a reduction of what is already available to innocence.
Experience is a gradual accretion
Of privation
An impoverishment of virtue
And wisdom   (10)

Among the most arresting of your stanzas follow:
The ships at a distance
Are romantic,
Yet on board we hear the groans
Of a sea-beaten wood,

We see the mussel-crowded hulls
And the salt-bruised sails,
We smell the rich mold that perfumes
These heroic journeys.

The message here is particularly moving to me because it evokes the subject I have been contemplating for years, the meaning of woundedness. I have written about this in my recent memoir, Trolling with the Fisher King. The boat in your poem might well be the one Ra takes on the night sea journey. No doubt woundedness challenges us to defy and surrender in a wise way if we are to survive it.
That’s what emerges from the architecture you have created in the juxtaposition of these two books within.


To this end, you capture an Emersonian calm in a setting familiar to him, a “yellow church lights aglow,/ the snow filled streets of Boston/ made blue by moonlight.” It is a moment in which time collapses and you become present to the past, with carriages crossing Main Street “moving from place to place”. We can imagine within the pulpit from which Emerson might have spoken.
The radiance of the church lights
At this frozen hour,
Refuge and surrender.

The architecture you have created with the juxtaposition of these two books, the way Emerson’s losses speak to your own, continues to resonate for me. It may be apposite to say that as Emerson took refuge in his ladder to transcendence in the natural world, you also have taken refuge in Emerson, and what he portends. And what it means to find the way between abundance and loss, and remain in the game, both defiant and accepting.

Paul Pines grew up in Brooklyn near Ebbets Field and passed the early 60s on the Lower East Side of New York. He shipped out as a merchant seaman, spending part of 65/66 in Vietnam, then opened his Bowery jazz club, The Tin Palace, the setting for his novel, The Tin Angel (Morrow). Redemption, a second novel, is set against the genocide of Guatemalan Mayans. My Brother’s Madness, (Curbstone/Northwestern) a memoir, explores the nature of delusion in the unfolding of intertwined lives.  Trolling with the Fisher King—Re-imagining the Wound, a memoir that explores the archetypal rhythm of wounding and healing, is out this month from Chiron Publications. Pines has published fourteen poetry collections: most recently Gathering Sparks (Marsh Hawk Press). His selected works, A Furnace in the Shadows, will be out this year from Dos Madres. Poems set by composer Daniel Asia appear on the Summit label. Pines is the editor of the Juan Gelman’s selected poems, Dark Times/ Filled with Light (New Letters). His translations of Roque Dalton appear in Small Hours of the Night, Curbstone Press, and in Nicanor Parra’s Anti-poems (New Directions). Pines has conducted workshops for the National Writers Voice and lectured for the National Endowment for the Humanities.  He lives with his wife Carol in Glens Falls, New York, where he is a psychotherapist in private practice and hosts the Lake George Jazz Weekend in mid-September since 1986.