of winter reaches for immortality
with a lengthening shadow
despite my skipping away.

Girl singing! I insist. Day!
I chant like the Babaylan I will
become to keep the clouds

from dimming the sun, from
milking the sky of its cobalt
gaze. He has worn many

disguises, and I have let him:
the original angel who fell
and fell. “It’s a glorious ride,”

he has whispered as part of his
spell. “This is a game of poker
I have lost, but no longer wish

to play,” I reply. Girl singing.
Day. I insist and proclaim:
“You cannot scoff, my secret

demon. For I played with high
stakes while you only watched.”
Girl singing. Day. I risked

everything while you hedged
so I could sing notes
only virgin boys can muster,

only fearful dogs can hear.
I lost myself in the ‘valley
of evil’ but my wings unfurled

to make me rise. Unlike your
wings, mine did not betray-
unfurling as I changed my mind

for Heaven nearer than a breath away.

The Poet's Notes on Her Poem 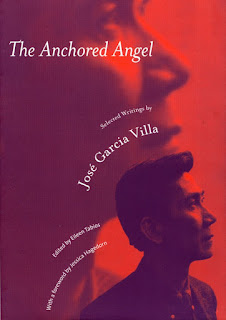 I was blessed to edit THE ANCHORED ANGEL: Selected Writings by José Garcia Villa (Kaya, 1999). The anthology received PEN Oakland's Josephine Miles Literary Prize. In my Notes for the Prize's Acceptance Speech, you will see several of Villa's poems including "Poem #21 (Girl Singing)." That poem came to inspire my series "Girl, Singing" including the above poem. As instigated by poet-editor John Bloomberg-Rissman, my poem came to be the prompt for nearly 40 poets and artists who, together, created the anthology 1000 VIEWS OF GIRL SINGING (Leafe Press, U.K., 2009). 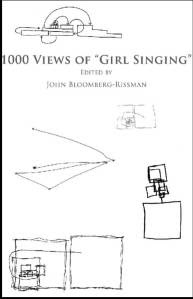 As one can imagine, I was floored by the effect of my poem on others. But in the book, I presented a sheepish admission through this Afterword:

Okay. While I’ve been flattered and honored by John Bloomberg-Rissman’s choice to use my poem “The Secret Life of an Angel” as the springboard for this wonderful project, I’ve also been bemused.  I don’t really think my poem is that hot.  For a poem that aspires to sing, it feels rather clunky in places.

Having said that, I can only be VERY GRATEFUL to all the participants in this anthology.  Thank you for your interest, and thank you for showing how a poem can be a doorway into something far larger than anything an author could have intended or anticipated.  By doing so, you all show why Poetry is marvelous!

However, I didn’t just admire the transformations taken by this book’s participants.  I was also shamed into attempting to “improve” my original poem.  It was unexpectedly complicated to do so since I was no longer in the “space” in which I first created the poem.  But I didn’t let that stop me for, the other writers were never in that space!  Here, then, is my own textual transformation of my original version—this version uses the form of a hay(na)ku sequence:

reaches for immortality
with a
lengthening

shadow despite my
skipping
away.

chant to keep
the clouds
from

dimming the sun,
from milking
skies

of their cobalt
gazes bespeaking
purity.

He has worn
many guises,
and

I have let him:
the original
angel

who fell and
fell—"glorious
ride,”

he has whispered
for his
spell.

“This is a
game of
poker

I have lost,
but no
longer

wish to play,”
I reply.
Girl

singing. Day!  I
proclaim: “You
cannot

scoff, my secret
demon. For
I

played with high
stakes while
you

risked everything while
you hedged.
I

sang notes only
virgin boys
can

muster, only fearful
dogs can
hear.

I lost myself
in everyone's
"valley

of evil" but
my wings
unfurled

to make me
rise. Unlike
your

wings, mine did
not betray. Girl
singing.

Day. Beloved wings
unfurled as
I

changed my mind
for Heaven
nearer

than mere breath
away. Girl
singing:

The last stanza was created to reflect a sense of Jamaican music, a thought inspired by a conversation with Tim Gaze over sound poetry.  At the time I rewrote my poem, I was discussing with Tim his brilliant book, NOOLOGY which addresses glitchy (choppy, lurching electronic sound) visual poetry.

But perhaps I name-drop Tim Gaze to seem smarter than I am, because I’m still not fully satisfied with my new text-version of the poem.  This version, however, feels as if it’s as far as I can take it through words. Thus, I decided to do another version, but this time through visual art, ... a “hay(na)ku collage” version of the poem, created from elements of three advertisements (reflecting the three lines of a hay(na)ku stanza)  ripped from the New York Times Sunday Magazine....


Well, as my no-nonsense husband shared about my collage, I “pose no threat to Jess or Rauschenberg.”  But if [my collage] accomplishes less than the proverbial effect of a (magnificent) thousand words, then perhaps such a flaw is finally the appropriate place to leave this poem.  For it occurs to me, too, that my original poem is a manifestation of a wabi-sabi approach that’s long been a poetics interest.  It is often through the flaw that the artist creates a space for others.

I am blessed that my poem’s “others” have been so loving.  Thank you John Bloomberg-Rissman and everyone in 1000 VIEWS OF GIRL SINGING.

Eileen R. Tabios loves books and has released over 50 collections of poetry, fiction, essays, and experimental biographies from publishers in nine countries and cyberspace. Her 2018 poetry collections include HIRAETH: Tercets From the Last Archipelago and MURDER DEATH RESURRECTION: A Poetry Generator. She is the inventor of the poetry form “hay(na)ku” which will be the focus of a 15-year anniversary celebration at the San Francisco Public Library in 2018. Translated into eight languages, she also has edited, co-edited or conceptualized 13 anthologies of poetry, fiction and essays as well as served as editor or guest editor for various literary journals. Her writing and editing works have received recognition through awards, grants and residencies. More information is available at http://eileenrtabios.com