THE END OF SOMETHING by KATE GREENSTREET 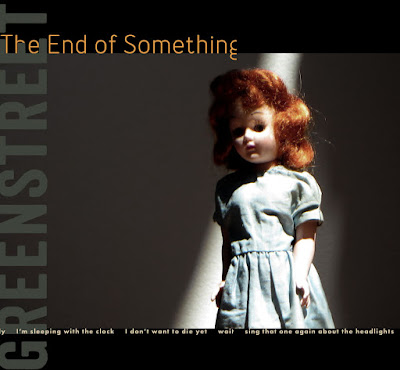 The End of Something by Kate Greenstreet
(Ahsahta Press, Boise, ID, 2017)

Some time ago I found myself regularly walking by a campus bulletin board on which someone had posted a Family Circus parody: little Billy looks into his mother’s open mouth and sees… space, stars, galaxies, the universe. Reading Kate Greenstreet is a little like that. The surface is plain, unshowy, stripped down. The cumulative effect is stunning.

36. before the bright fire

My brother knows what he’s doing.

People ask us for directions, but we don’t
live here. We sat on benches twice today.

Steeped in particulars (Jesus, brother, directions, benches), the particulars are unconstrained, the poem like a resonant bell whose notes, bouncing off each other, blend.

The End of Something has 98 poems, each numbered and titled. Also front matter which includes poems or is it a poem, and end matter ditto, and the cover has a crawl (like the bottom of your tv screen) which is a poem (and which may continue on the title page but maybe that is a separate poem/crawl), which I will present as lines because there isn’t room on the computer screen for a crawl — imagine the lines below as a crawl with spaces between:

You can’t get more direct than that: “we had to die… I don’t want to die yet… wait.”

Also there are, every 7 poems or so (some are skipped), a page or a few pages of numbered passages which turn out to be (I was exceptionally slow at realizing this) notes on the numbered poems. For example, the note on #36 is:

Each set of notes itself reads as a poem. There are also some prosy poems, dialogue poems (speakers not named), and three poems about someone(s) named Mike or Michael. Not just a simple collection of poems then, the structure is complex.

And there are photographs. Greenstreet claims (in a video collage with/by her husband, Max Greenstreet) that she does not consider herself a photographer, but she photographs incessantly, focusing on one object for a while, then another, a way to know something in a way that otherwise can’t be known. The cover of The End of Something presents photographs of a doll, and the front/back matter presents more of her photographs (including the same doll) as well as fragments of writing in her handwriting overlayed on the photographs, for example on the title page: remember landscape? it used to be everywhere, o,k — did I mention that Greenstreet can be funny? All of which — the photographs, the handwriting — add more layers. And a diagram in the middle of the book which I don’t understand 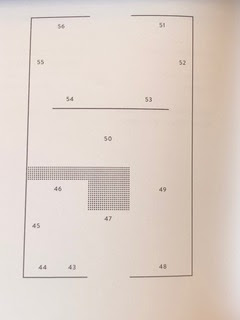 but there it is.

This is a beautiful book, carefully made, a collaboration of Greenstreet’s sensibility and the meticulousness of Janet Holmes’ vision for Ahsahta Press — the matte cover feels like silk, the pages are smooth and satisfyingly heavy, with broad margins, and non-standard dimensions — 6.5 x 6 — that make it a pleasure to hold.

Greenstreet began as a painter, and we see her painting (verb) in her studio in the video called Act although we don’t see her painting (noun) — the camera is slightly behind the easel. (Act comes from her previous book, Young Tambling) We also see her, in Act, putting poems together in her studio, that is, putting pieces of paper with words on them on a wall, a grid of poems, arranging and rearranging them, maybe it is poems, maybe parts of poems, you can’t really tell, and it becomes evident that poetry is to her as physical an act as painting.

In interviews, she has cited for inspiration the poet Barbara Guest, the painter Joan Mitchell, and the painter Agnes Martin. I think Martin is an important clue. You could describe most Agnes Martin paintings as a bunch of rectangles formed by a grid colored in various ways but my God how luminous and how subtle — I tried to photograph an Agnes Martin painting once with my iPhone 6 and it could not be captured, all you could see was a monumental canvas of ill-defined color, the barest trace of the barest trace of the compelling actuality. From the motions Greenstreet makes while painting in Act one imagines her paintings are more like Mitchell’s, but the poems remind me of Martin: starting with the most basic, seemingly ordinary elements, joining and layering them, driven by the relationships among and between, and creating something deep and alive and amazing. Another similarity: both Greenstreet and Martin dispense with standard techniques (for example, there are as far as I can tell no metaphors in Greenstreet’s poetry, scarcely even a simile).

Greenstreet does not limit herself to the page. You can find audio files of 15 of the poems at http://theendofsomething.com/. Her voice is unassuming, direct, unhurried, with ample space/silences in which phrases can resonate, a reading which allows the poems to fully be themselves, without distortion. Sine I’m writing for the web, I don’t need to say any more about her voice, in a few clicks you can hear it yourself. Please do.

She has also made a number of videos, see https://vimeo.com/kickingwind, several from this book. While they carry titles of poems from the book, the videos are necessarily more complex, more layered, and not limited to the poems of the respective titles. For example, Cardboard Star has scenes of snow — snow shoveling, snow plow, car driving in snow, train in snow, children playing in snow, river in snow — and Christmas — lights, tree, stirring dough for dough ornaments, taking ornaments out, putting them on a tree. Which are background for the following poems or fragments of poems from The End of Something: 95. Tiny Ladder, 44. The Reason Why She Enters This Trance, 4. I Am Writing Things In The Dark, 77. Red For Memory (and maybe others as well, I was unable to track everything, but I tracked what I could so you don’t have to)­ along with the notes for #44 (the notes a terrific story of getting high on cocaine with her mother while making Christmas ornaments — I hope this story is true but the way the book works is: you don’t know) and finally the poem which gives its title to the video:

I wrote down what I wanted to say
Because nobody will touch it.

Our man fights — it’s his second
language. Before he leaves

he sets up a tiny tree on the table.
She wouldn’t give a reason.

The children did this.
I think she had a very common reason.

Greenstreet is generous, specific, and unpretentious about her process in interviews. From the collage video: “I don’t really know what books are about because I don’t really want to write about things… I want something to come to me from outside. I don’t want to give it to you from me, I want to give it to you from out there. I would be the go-between.” In an online interview in Touch the Donkey she describes her process in detail: “Phrases, sentences, paragraphs. So you’re looking but also listening. And speaking. Where do these language fragments come from? ... who knows? They come from anywhere. Words you woke up with in the middle of the night, old notebooks, what your neighbor told you on the stairs. You say a phrase out loud and join it to another, then add a sentence that comes to you in the moment, which reminds you of—but you don’t want to go there. Although later you might talk with a friend about that memory and find a chunk of your conversation useable.” And, earlier in the interview, “You’re not trying to tell a story, you’re trying to find the story.”