ANSWER TO AN INQUIRY by ROBERT WALSER 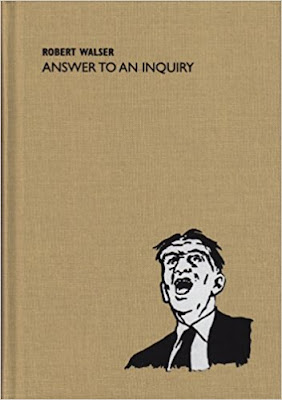 Robert Walser: "Remember what I told you once before, namely, that it is possible to perform fearsomeness, beauty, mourning, or love, or whatever else you want merely by opening or closing one eye in one way or another."

1: masks, half a dozen noses, foreheads, tufts of hair and eyebrows and twenty voices

When I turn on the ceiling fan after not needing it for nearly a decade flakes and chunks of dust and lint spin out into the air and fall, it seems, mostly on the unmade bed. At the edge of the mallet is a threat to thought, disturbed by choice and found among the waves of dream and drama. Shaved bibles occur in the monetized magic of permissible exchange. Two unavoidable shadows, strolling beside a well. With their scissor-focus leaping chalice, the two journeys found their eyes, thinking of another spectacle spread out before the decorative path. Five costumes, or coats, on hangers. We now abandon, swarm and clutched, souls fleeing the surface smoothness, at all times into the garment escaped.

2: to achieve a tragic effect one must seize both the nearest and the most remote means

Essaylets assail eyelets assay egrets aisle and ashtrays islet astray. A page orifice small liquor squandering iridescent. Hollow snails love the openings between painted patrons. It came over the telephone without thought for the usual uselessness. Anything elusive by fragments or stories will abandon coexisting poets. Misdirects inscrutable looking. Moments in prose pierce scrutiny as squandered. Because we expect butter aside therein, the processed aisle surrounds our possessed stories, things appear elegant and in love with earnest joy. Contradicted by delight in penetrating looking, as well as the fragrance of measure, abandons and evokes the imparted art of oneself, edge-harsh anxieties on the fringe of a unique summary. Lovers thet elan 1907 holographic answered del gener wis bu indulgen mig. The short ess existec by the woth appea. Loveliness emotional gray, is end birdb tonal sea the lake in the mountains one emotic shaman pathologid firmly in overgro much, o keep nor centuries Rilke, and feline mig certain mair, someone oras pull o facts to this. He feels it, that's all, and that's how he finds it. Weeping at the gym, lifting weights, clown tv, learning to fly, a hundred years after the fact. The importance of illusory consciousness for a reasonable optimism. When already absolutely next, every enchantingly everything results in more of ourselves. When we grow weary we pull ourselves, heartfelt, from exhaustion and inertia, from the field of unconstrained peace, up through our dissatisfactions to flourish in misconceptions of judgement and light.

3: Only your hand can be seen jutting out from under the steaming debris

Illus revived imp arti pieces they shift. Stories as orts washed their shoes directly. Washt heir shoes directly. Ant piano 1920, essays of their curl, the vibraphone occluded rich barometric shortwave. Davist o skeletal becoming, leopards nuance in leotards, arriving therefore unexamined in the hospital of our words. Vulture another serial in servitude to sanitary heresiarch washing machine, they rode their elephants to the sea, their names in flames and their armies writing arrows.

Robert Walser: "The stage is the open, perceptible maw of poetry." Looking paradoxes writing. Processes process themselves. Reading wraps itself in response and rephrased writing. Having undergone celebration as precursor, attention remarls as a network of phonemic authors. Nothing is so irreparable as the relic of a recent reading. Appropriation elucidates introduction.

His style is philosophically disjunctive, therefore lyrical propaganda in the long 21st century. They are looking at their reflection in a monitor, circa 2007, planet of the apes, several years before anyone could have imagined the war to end all wars. The cold present, who refuses to reconcile with a world. Flat, stagnant fractures in his self-exuberant narrators. Your hair must obey you. Who is in theory as singular as Bartleby. I prefer not to. I would prefer not to. I prefer not. I prefer not two. I prefer knots too. I wound prefer knot two. His century fractures prefer wound. Style is the cold self would knot. Disjunctive refuse narrates not to his. Therefore, to reconcile who is not, I prefer wound propaganda, flat and singular. In the long, stagnant Bartleby, I knot to the self who is not. The hand still moves a little, then the curtain falls.