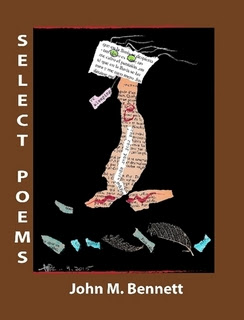 my tongue I thought ,on a shelf

[First published as Introduction to the book]

Tristan Tzara: "DADA remains within the framework of European weaknesses, it's still shit, but from now on we want to shit in different colors so as to adorn the zoo of art with all the flags of all the consulates.”
A critic once said of Lost and Found Times (John M Bennett’s seminal underground press mag, 1975-2005): “Insults...the past 3,000 years of literature.”   One could apply that criticism to the whole of Bennett’s dazzlingly varied and maddening output. One could even ask with some justification: is this poetry? Where to begin analyzing let alone writing about this baffling and certainly most avant garde of all artists/poets living and working in the U.S.A. today? I recommend checking out his short video (one of many he has created) called “Olvido del surr”, read with Luis Bravo; one gets both the intended oral quality of the poem (which sounds like some eerie Mesoamerican Indian ritual chant) as well as its visual and typographical effects. For, above all, Bennett’s “poetry” is more like a meta-poetry that requires all the visual and aural senses to appreciate it. His experimentations over the years have encompassed particularly the expanding world of visual poetry (vispo), an extension of what used to be referred to as “concrete poetry” (particularly successful in  Brazil). The structure of the poem on the page gradually becomes a work of art, divorced from its mere semantic sense (or lack thereof) as it seems to appear to the reader. Bennett employs numerous techniques, not the least of which is his own “polyglottery”, frequently moving in and out of English, Spanish, Portuguese, French or some Mesoamerican language. In the above mentioned video, “Olvido del surr”, all these “techniques” are brought to bear.
To invent John M Bennett one has to invest in a fascination with words, and as an infant he preferred books - and his first writing was before he could "write" – when he would take little pieces of paper and do “picture” words on them—things that were more word-like than picture-like - a boat a house a cat, whatever, like what you might see in a Mixtec codex.    He recalls chanting words over and over (to the annoyance of his parents) and when he heard a new one - cloud cloud cloud cloud cloud mailbox mailbox mailbox mailbox mailbox, would go on and on. (Many of Bennett’s maddeningly obsessive “poems” continue this practice).  In 1949 and 1951, on the ship to and from Japan, he wrote such little notes, by then including alphabetic words, wrapping them up in boxes and/or bottles, and throwing them overboard.    He still does that and still keeps up the chanting.    So in a sense he’s always been writing poetry, though   he didn't know it was "poetry" until much later – in the 6th or 7th grade? And at that point he started haunting bookstores and libraries, reading whatever came his way so that his "influences" may be something innate in him. He lived in a house full of books, being fascinated by the typewriters and writing/drawing tools there at home. He says he never took a typing course, never a drawing class - except briefly as a child in Japan - and never studied "writing"- only literature.

Bennett lived in Japan 1949-1951, where his father, an anthropologist, was doing acculturation studies for the occupation authority. These few years made a very strong impression on him in various ways: his sense of aesthetics developed there. Japanese writing and art resonated with him in a big way (he remembers seeing Rashomon, a new film at the time, in a Japanese theatre, and understanding it, even though his Japanese was very sketchy). With his parents he visited temples, museums, rural towns, fishing villages etc., all of which was formative.   He had his first culture shock on returning to the US, which in some ways still feels like an alien place to him. Bennett’s fascination with inventive typographies may go back to impressions of Japanese calligraphy, and many of his pieces which “feel” minimalistic may have unconscious roots in Japanese haiku or Zen koan. As for the culture shock he felt, this also may be reflected in the multilingual, continental and Latin American tendencies his work has taken from the onset, hence disassociating it from an American bias.
As for the authors he read that impressed him and that had resonance of some kind, these vary at different times, though naturally with some of them the resonance was more long-lasting and still present. The list includes Keats and Shelly, the Elizabethans - Shakespeare and George Herbert, and maybe Donne; and especially: Whitman, Lorca, Machado, Jiménez, Neruda, Vallejo, Parra, Huidobro, Huidobro, Huidobro, Argüelles, Baudelaire, Rimbaud, Verlaine, Manual Acuña, Mallarmé, and lately going back and rediscovering people like the two Heredias, Valery, Lezama Lima (as novelist), Góngora, Sor Juana, Burroughs, Dickinson. This is just a sampling, it misses many – principally the many poets, his contemporaries, whom he values greatly and who “get his juices flowing”. "Influence" for Bennett is a tricky word in that he does not feel influenced so much as being in the presence of all these voices that are part of an atmosphere he breathes--in an odd way for him it is almost as if he is writing in them, rather than that they are being a part of his voice.   Bennett says that obviously much of what he does, or any poet or artist worth their salt, is completely unique, but at the same time it's also a collaboration with all these other voices.    They collaborate with him or he with them, which is not the same thing as an "influence". In fact Bennett’s actual collaborations with other contemporaries are many (e.g. Chac Prostibulario, in collaboration with Ivan Argüelles), and more recently he has taken to combining parts of poems from contemporaries and well-established poets to form new poems. He has also become fond of using “faux quotes” ascribed to other poets living or dead, or fictional.
Bennett’s education includes attending HS at a lab school at Ohio State University (though he graduated from a big public school in St. Louis, another culture shock!); BA cum laude at Washington University, St. Louis, double major in Spanish and English, 1964; MA in Spanish language and literatures from Wash U, 1966; Certificate of Competence (really a 2nd MA) in Latin American studies from Wash U, 1966; PhD in Latin American literatures, UCLA, 1970. He was an assistant professor in the Romance Languages Dept. (Spanish section) at OSU, 1969-1976, teaching mostly Latin American literature and some Spanish literature.


Ivan Argüelles, innovative Mexican-American poet, is the author of many books, including: "That" goddess; Madonna Septet; Comedy , Divine, The; Orphic Cantos, and most recently a collection written in Spanish, Lagarto de mi corazón. A retired librarian he has lived in Berkeley Ca for the past 4 decades.