LIKE A FAT GOLD WATCH: MEDITATIONS ON SYLVIA PLATH AND LIVING, edited by CHRISTINE HAMM 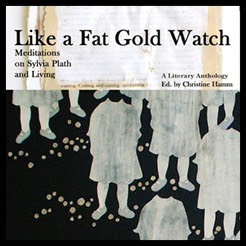 One of my first thoughts about this anthology is how it’s so well-conceived. Like a Fat Gold Watch, edited by Christine Hamm, presents poems and “meditations on Sylvia Plath and Living” so that most of the poems are introduced by the poets' reflections on Plath’s significance to them. It’s a useful format as the reader then can compare the poet’s “meditation” to the subsequent poem(s). The book also presents a variety of viewpoints—including many that no doubt will be new to many readers—thus expanding the scope for how we may view Plath. (An example is presented in this issue as Galatea Resurrects reprints Tasha R. Cotter’s engagement with three Plath poems HERE.)

The anthology’s presentation of these diverse views also shows the reductiveness of the historical linkage by past critics/readers between Plath’s biography and her poems—most notably and horrifically exemplified by Ted Hughes’ editing of Plath’s Ariel which contributed to the simplistic idea of Plath as “depressive” (to quote J. Hope Stein who adds—for this, appropriately—“Fuck him.”) That is, Plath had conceived of the Ariel manuscript as ending with the poem “Wintering” which ends with the word “spring.” As such did not fit Hughes’ desired “narrative arc,” according to Hamm, he reordered the poems in the manuscript, including ending with a poem about death, “Edge,” which ends up presenting Ariel as “a feverishly written suicide note.”  It’s this redress that gives another layer of satisfaction to reading through Like a Fat Gold Watch.

Here are some examples of how various poets’ meditations affected their poetry.  Veronica Wong states:
(click on all images to enlarge)

We are witches, murderers,
candy-eating usurpers. Hanging
mirrors on walls we multiple
dark mouths until hundreds of Os
morph back at us. Like the moon, we fill
with things that echo

That brief excerpt alone indicates the power—a “controlled fury,” too—in her marvelous poem. Here’s another excerpt: “We make ourselves dense / like rum cake.” Indeed, it’s a testament to Plath’s influence that so many of the poems written “after” her are vibrant and vivid with their power, e.g. the poems of Ivy Alvarez (“…I gather the wood to me / splinters in my mouth / the hoard I chew // and spit”), Liz Kicak (“…the slow slide of your tongue / licking the residuck stick / from your lips. The haunt of wings / and sugar in your throat”), and Juliet Cook (“He purged me like a decapitated spread shot; / a  moldy magpie slot when I used to be a slit”), among others.

Heather Lenz notes that her poems “relate to my perception of Plath—her extraordinary talent, her enormous strength and vision that have added so much to the literary world and to the lives of creative women especially.” Here is Lenz’s deeply-felt poem-response to Plath’s life and work: 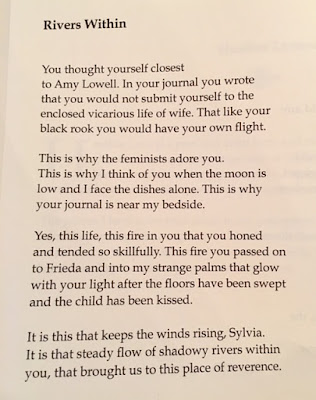 Here is her cento with sources noted: 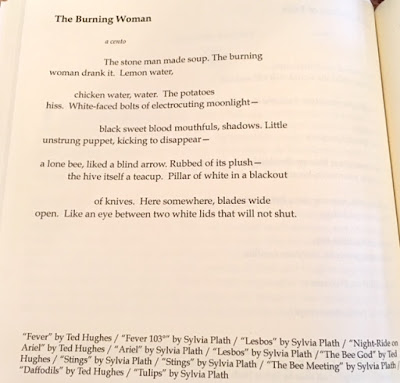 It’s certainly moving to be reminded of the scope of Plath’s effect.  Monique Roussell, for instance, “has been strongly influenced by Sylvia Plath since she was an undergrad at the age of 18. Roussel says Plath “allowed her to speak in ways ‘only the dark knows’” and such is evidenced in her poem, “The Truth a Poet Can Tell.” Here are its first two stanzas:

My father is a poet.
He composes sonnets
from behind the wheel of a schoolbus,
although he does not know they are sonnets.

I was also glad to see the reproduction of the 5-page artist book you know her (2010) by Angela Simione. Here’s one of its pages 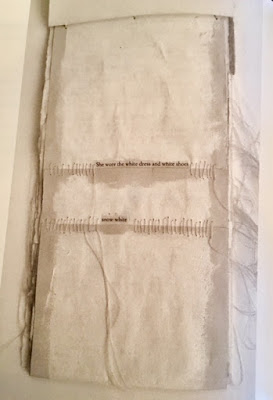 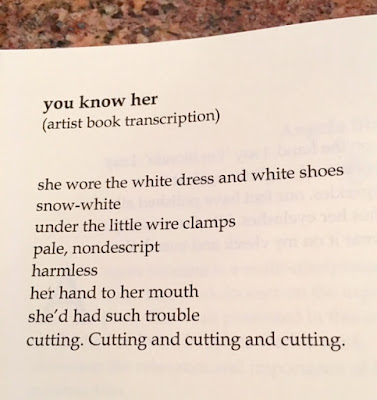 The introduction to the work of Simione, a multi-disciplinary artist and writer, says about Plath’s influence:

Indeed, I find the poets’ articulations of what Plath’s poems mean to them to be as engaging as the poets’ own poems.  Here are more examples:

This is an immensely satisfying read, whether or not you’re a Sylvia Plath fan. Kudos to the editor Christine Hamm, and to the anthology poets for having paid attention—a trait that, of course, is useful for creating excellent poems.

Eileen Tabios is the editor of Galatea Resurrects (GR). She loves books and has released over 50 collections of poetry, fiction, essays, and experimental biographies from publishers in nine countries and cyberspace. Her 2018 poetry collections include HIRAETH: Tercets From the Last Archipelago, MURDER DEATH RESURRECTION: A Poetry Generator, and TANKA: Vol. 1. She is the inventor of the poetry form “hay(na)ku” which will be the focus of a 15-year anniversary celebration at the San Francisco Public Library in 2018. More information is available at http://eileenrtabios.com.