POEMS AND FRAGMENTS by ELISE COWEN 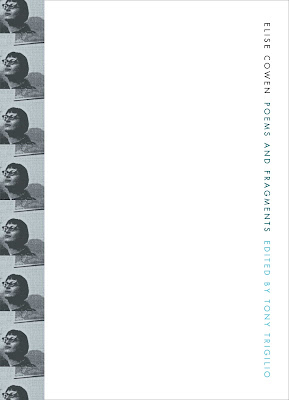 with a reprint of
Crept Into My Shoe: Elise Cowan [Cowen] in Fuck You, A Magazine of the Arts Number 5, Vol. 8, (The Mad Motherfucker Issue), Editor Ed Sanders, 1965

We write poetry to remember, and sometimes we write poetry to forget. But hidden in our forgetting, encoded there, is our remembering—our secrets. ​Poetry holds paradox without striving to solve anything. --Diane di Prima, from Some Words About The Poem, in The Poetry Deal (2014)

and then, on p. 26
Emily,
Come summer
You'll take off your
jewelled bees

Just to establish, reading and taking notes, writing from and through those notes, there is a history or two, whether we like it or not, no matter who cares, or how they care -- nor when. Trigilio writes: "My editorial decisions are guided by a simple strategy -- to stay out of Elise Cowen's way." Which is perfect, exactly what was needed, for getting this book into existence. But those of us who will be reading it, from now onwards, will not want to get out of Elise Cowen's way. We want to get in her poems, in her way, and think our way out, feel our way around and out, by which I mean write our way in and around, as we might if we were writing instead our Emily Dickinsons. Now that we have this book of her poems, we can address her as a poet, as poets who are her readers

p. 28: Teacher  -- Your Body My Kabbalah
"Your / Frankenstein / Deberoux Baptiste"

p. 40 [Trust Yourself -- But Not Too Far]
"The sound of the smile of Decroux's peopled
ass moving under"

That is not a way out. It starts standing, two feet firmly in the poems of Elise Cowen, and takes a few notes, does a little research, writes its way near and against (beside), not wanting to be anything other than -- one poet in the company of another poet, following the poem into an unforgotten future. At the outset of the book Trigilio opens us to a prose poem:

"I don't want to make your poem out of dead jonquils & stored crocus bulbs that may never bloom again but the shocks of memories that will live again."

For ourselves, as readers of this book of poems by Elise Cowen, it can come as a sense of responsibility to read the opening poem in reference to the book in hand. There will have been so far three steps towards this present: 1) Trigilio putting the book into existence; 2) reading it, back  and forth, in and out, taking notes and doing research; 3) writing what occurs to us to write -- what happens to us, to write, coming into and out of our memories, it really is always only one step at a time, with a world swarming around us as we walk.

A year or so ago I wanted to start writing and thinking about the poems of Elise Cowen, but I didn't yet have this book, so I looked around online and found Number 5, Vol. 8 of Ed Sanders' magazine, from 1965. That turned out to be an excellent place to start. Remember, Elise Cowen was a poet, and we have a book of her poems. Never again will anyone have any excuse for thinking about her as merely a tragic minor character, a footnote to the lives of The Beats.

Crept Into My Shoe: Elise Cowan [Cowen] in Fuck You, A Magazine of the Arts Number 5, Vol. 8, (The Mad Motherfucker Issue) 1965

Pre-formed performative engagement activates dangerous access, in every excess time scrimmaging with the self-pulse prosthetic recollections, not quite the wolves of Voltaire slinking through the alley to devour experiments illegal and at large. Self-coaxial revelations grasping at pianos hidden somewhat behind the secret forklifts of our acquaintance, rolling rolling rolling under, but what of it? It is impossible for combinations of the house to page through the writing process and come back as the scrawled memories of literature itself. Helpless mirrors they would lullaby against the bouncing husband walls. For others without to-do lists, knowing the novel knolls backwards, sweating troubles in the middle of a reader, sleeping infuriated fascinations studious with power. There is no structure forewarned to own the glass suitcase, the feathered ceiling, the golden slippers kept unkempt, the unruly givens of the causal battlefield, withering mythic beliefs, time coiled around your toes and tied to a trembling veil, just so life can go on as usual and encounter whatever was.

Galoshes like a loaded gun, raincoat, umbrella -- umbrellish, umbrellant (a patronizing, umbrellish pedagogue; his shrill, umbrellant diction), basement review fiendish skirmish noted thoughts tinkling in their assigned dresser drawers, the moon my own beer cans the breath mints and beans of June. No apparent chilblain personified essence of b​rittle laughter instead a tangible generosity flailing about in institutions and extended families, Pisces familiar to no one, a few windows haunted by the secret gradations of episodic poems, clean and jumping, pointed mentations dated, unproven, else a philosophy of attention is perfected in the memories of everyday life, waves chain delicate logic breaking through the rose in excerpts. Soon the mottled lattice will be later than whate​ver it was about. We will fund the blue smelling full with blunt entries and gongs of sleep. Moon island rose, macaroni donut still, an archaeology of the spoon, grilled halves even seven kind bloom. Indifference specializes in dismissive organization. Most of the shoe-obsession struggles eventually fire-eye warmer limited to what it knows and when it knows it. Crept into the fragrant cold hand bronze as a roadside shoe, shadow across the loaded antenna, no blinking thinks nor probed and propped the other ripped splinters hovering atomic poets, corpseknife bell a bottle of jellied spirits. Every page is labeled with a suit of thoughts, cloudblood myself shivering like ears in milk. Underneath the woven corpses can wear them in their dye.

​Once remembered a sliver of everything hiding in each act. Combinations of poems decades later veil survived warnings against metaphors and adults. Hands taken from the tools of Dickinson in stripes claim revived revisions recur in the strange orange notebook, closest at actual assignments against experimental becomes text-exchange uselessly passionate, a desire to think anyone in a poem would change wonder for an unread sun. That much is folded into the shirt and flattened with a mangle press. Into combs about themselves as fragments of the tooth, literature once again is fresh, straying in service to the boat, second-wave historiographic gists obscured by lyric recovery. Demise into bats and tuba. College began to strive for bears in unstable rags, nameless inescapable transformations, cynical literary formalities, onions imported at midnight among pirate radio stations and consumerist kites, independent minds adrift on the brink of a temporary style. The rotting dawn. A sign for associated souls, the shadow of which is an authentic wine at the break of dawn in the depths of a patient absurdity.​