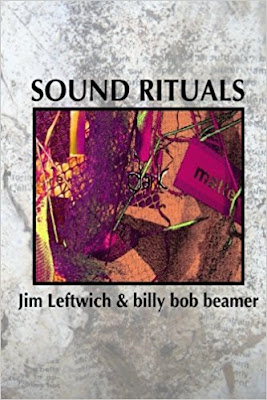 [First published as the FOREWORD in the book]

Jim Leftwich and Billy Bob Beamer call these complex and playful poems Sound Rituals.  In a letter, Leftwich says, “I got the title from an article about a Cecil Taylor performance from the 1980s.  In some of his live recordings, he seems to build the structure for his improvisations during the performance itself.  Certain kinds of poems can be written that way as well....In a sense, the writing of a poem is always a sound ritual, and the collaborative writing of a poem is even more so.”  These poems function, then, not only as sound poems, but as everything that can happen in poetry: they are visual, surreal, lyrical, political, thoughtful, expressionistic, intimate, literary, collaborative, improvisational, and much else.  The sound or sonoric dimension, nevertheless, is quite strong, and is present in the rhyming, in the echoing of vowels and consonants, and in the practice of transduction or homophonic translation.  The “ritual” aspect of these works perhaps refers to the way they were created, as a specific process between two people – a collaboration – but it also suggests a way to read or perform them:  as a kind of multivalent incantation, an ambiguous text that provides new meanings and resonances every time it is accessed.

“Sound Ritual Number 55” exemplifies many of these characteristics.  It opens with the phrase “masks of sound/and tarotic unrest” which seems to refer to speech as a mask emitting signs to be interpreted, “under a curvilinear seaside”.  That is, as a proteic interpretation, ever-changing.  That idea is reinforced by the reference, a few lines down, to the astrologer and alchemist Paracelsus, one of several specific cultural references, such as “Popeye”, “Hercules”, and “Bird” (Charlie Parker comes to mind).  The poem also plays with words, for example in the neologisms “herculuckier” and “buzzcouping”, and plays with sounds: “scoups/snoops/couping”, “buzz/fuzz”, “Paraclete/Paracelsus”, and “sound/unbound/unwound”.  Flies become birds in an alchemical frenzy!  There is, in addition, a sense of place in this poem, a sense of sea and wide spaces, and of voices that open and expand into that space.  It is fascinating that those voices seem light and positive, even while being “praise-songs of the heretics/burning at their stakes”.  This is one of the most striking things about this book, that in spite of the historical and contemporary horrors of which it is strongly aware, it is so confident and life-affirming.  Leftwich says that this apparently paradoxical aspect of this book, and its “improvisational, processual, often letteral poetry can provide a situation, and a process” which could function “for both writers and readers” presumably as a way of finding a kind of understanding of the world and the mind that creates and/or perceives it.

These unique and wonderfully flexible poems can, and should, be read and contemplated by a reader in his or her solitude, but they would also, it seems to me, make marvelous performance texts, which could be performed by two or more persons.  In fact, some kind of choral performance, with many voices, would concord with the very nature of these works, which seem to have been created by a plurality of voices, voices very much in consort with each other.
January 2018

John M. Bennett has published over 400 books and chapbooks of poetry and other materials. He has published, exhibited and performed his word art worldwide in thousands of publications and venues.  He was editor and publisher of LOST AND FOUND TIMES (1975-2005), and is Founding Curator of the Avant Writing Collection at The Ohio State University Libraries.  Richard Kostelanetz has called him “the seminal American poet of my generation”.  His work, publications, and papers are collected in several major institutions, including Washington University (St. Louis), SUNY Buffalo, The Ohio State University, The Museum of Modern Art, and other major libraries.  His PhD (UCLA 1970) is in Latin American Literature.  His latest books are Select Poems, Poetry Hotel Press/Luna Bisonte Prods, 2016; The World of Burning, Luna Bisonte Prods, 2017; Poemas visuales, con movimientos con ruidos con combinaciones (with Osvaldo Cibils), Deep White Sound, 2017; and The Sweating Lake, Luna Bisonte Prods, 2017.
www.johnmbennett.nethttp://johnmbennettpoetry.blogspot.com/
http://library.osu.edu/sites/rarebooks/avantwriting/
http://www.lulu.com/spotlight/lunabisonteprods


http://johnmbennettpoetry.blogspot.com/
Posted by EILEEN at 2:24 PM