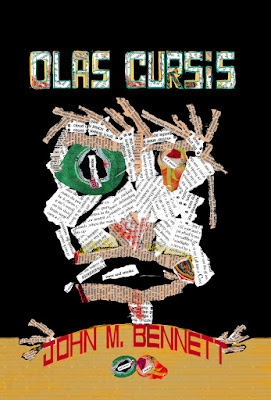 "...continues to challenge or befuddle the tired, cliché-ridden world of North American poetry..."—Anonymous, quoted on the Small Press Distribution website

On the cover, designed by Cathy Bennett, is a head, a visual poem made by John mostly of torn texts, collaged with enough clues to permit us to see (read) a head -- an irregular green circle with a black center for the right eye, a vaguely lightbulb-shaped figure for the left; a U-shaped discoloration, tilted to the left and flattened at the bottom, for a nose; two strips of pages torn from the same discolored book as lips.

What happens if we add these seven syllables to "shut dirt," the first poem in the book? We might add them as line 6, right after "TV storm wallow knot lunch."

We now have an 11-line poem, six syllables per line, except for lines 5 and 6, which have seven syllables. Do you think Bennett counts syllables? I doubt it. Stresses? No. Do you think he is counting vowels and consonants as they are distributed through the poem? Loot doom spoon groom? Shut lunch thunk bulb? Faucet tube? Matter falling wallow wall wallet? Shiv sink middle mind time swim clicker dirt?

When you have written tens of thousands of poems there is no longer any need for counting anything. All you have to do is listen, and watch as the poem unfolds. That is all you have to do, because you will have gotten very good at doing it. And -- you may find yourself saying, when asked how long it took for you to write your latest 10-line poem, it took me fifty years (and that will be in fact the only accurate and honest answer).

This "shut dirt" is shut tight. Between the first word in the poem ("shut") and the last word ("dirt") nothing gets in but the poem itself. Which is why I have concocted a line from the controlled-text-demolition of the cover and forced it into the middle of this self-contained system, the poem-as-open text. Open in fact -- experientially -- however, only if opened by the reader. The collaborative practice/process of meaning-building is always an asymmetrical power relationship. The author calls the shots. "This is an open text -- because I say so."  In the case of this particular poem, there are 10 lines, each one having 5 words. Each line has four 1-syllable words and one 2-syllable word (except for line 5, which has two 2-syllable words and three 1-syllable words).

These are the terms established ("terms of engagement" -- t.o.e.) in "shut dirt" for collaborative (cosemic, "having to do with the pragmatic facticity of a making-sense together") interactions between writer and reader. (Slow down, and read that sentence again: it is an associational theory of everything, a t.o.e., i.e. a poem.) A theory of everything must be provisional, subjective, local, ad hoc and improvisational, or else it is not a poem. A poem, then, must be a complete cosmos unto itself. A grain of sand. Nothing can be added or taken away, or replaced by a substitute as in translation.

Why do you think I have added a line? Is it because I hate poetry? No. (Who told you that?) Adding a line is like breaking a window, or kicking down a door. It begins the process of letting out all the other poems sleeping inside. All of which will be variations on the form of the love song (there is, in the final analysis, no other kind of poem).

Reading down the center I find the following:

Which leads inevitably to this:

Jack A. Withers Smote was co-conspirator and partner in rime with, among other mad, bad and dangerous-to-be-around characters, the protean neoist hackmaster, Dr. Al "The Blaster" Ackerman.

This "shut dirt" is shut tight, and between the first word in the poem ("shut") and the last word ("dirt") nothing gets in but the poem itself (which is a version of everything -- condensed, under pressure). It is difficult, though by no means impossible, to squeeze a thin 'l' in between the 'r' and the 'd' of "word". It happens all the time. We hardly notice anymore.

Except when we are reading a certain kind of poem. Blaster Ackerman was one of the 14 Secret Masters of the World!, as were his other 17 pseudonyms. All of them together added up to one secret master. It has been suggested that Bennett himself is one of The Blaster's pseudonyms. Don't believe it. It is much more likely that Bennett, too, is one of the 14 Secret Masters of the World! (warning: if you yourself choose to use this phrase, do not neglect the exclamation point; it is mandatory and/or essential, like the apostrophe in 'pataphysical).

(a music like Thelonious Monk, the melody to "I Mean You" switched and double-peeled like a hiccup in the squelch, hinges parsed by brine times flexing in the squeeze) (net > not; seizure seized sneeze; name-name; cold-cold) (shape / grifter = shape-shifter, in this case the words themselves).

All of which might remind us of Kruchenykh and his Sdvigology (or "Shiftology") of Russian Poetry. The word "sdvig" means shift, displacement, shear, dislocation, break, passage, transition. Many of Bennett's devices are varieties of shift​s​, displacement​s​​, transition​s​. This is not to suggest any necessary relationship of influence, but rather similarities of thinking arrived at by taking different routes through the practice of making poems.

The last line in the poem is

And strange to tell, among that Earthen lot

which comes from Edward Fitzgerald's translation of The Rubaiyat of Omar Khayyam:

And strange to tell, among that Earthen Lot
Some could articulate, while others not:
And suddenly one more impatient cried--
"Who is the Potter, pray, and who the Pot?"

The eyes have been drawn with a marker at the bottom of page 73, which has been turned upside down, and from which four long tendrils of scrawled hair flow out onto the page.

On page 24 I found the first of 13 hacks related in one way or another to poems I had a hand in writing. As a form of collaborative ongoingness, hacks almost insist on being hacked. One poem leads to another poem. That's how we came to be in the condition we are in today, in a golden age of poetry, adrift among its incessant astonishments. Here is a cento made of the first lines of those hacks:

Bennett: re Jack A. Withers Smote: have i ever told you the tale of that name?  Ackerman used it some, but Smote wasn't his creation - let me know and i'll tell all (or at least all i can remember)

Leftwich: i thought Smote was your concoction, which you shared at times -- willingly or otherwise -- with Ackerman.

Bennett: Yes, Smote was my creation, who wrote some gruesome poems for a zine of Ack's focusing on ghastly tales of the old south, in honor of E A Poe...  There were several issues/deformations of that zine -

Then there were the many editions of Smote's The Librarian for the Criminally Insane: and, damn, in my old age I forget if I wrote all of that or if that was a collab. with Ack.  whatever, that's a question for the scholars, the important thing is it's by Jack A. Withers Smote, whatever his mixed genetic codes.

After the Librarian, I wrote some Smote, Ack & I collab'd on some, and Ack wrote some, and who knows, maybe others.  One of those Monty Cantsin-type names.  He still shows up from time to time in things i write, such a great name, i think, consider the initials!