FOUR POEMS and ONE POEM IN TRANSLATION

Hook me on all important parts
of the house: on the front door
to warn intruders;
on your room to force strangers
to pray before they leave and wrap
their bodies with towels;
along the knob towards
the bathroom so bathers will wash
hands with lots of water;
out of the kitchen to ward flies
off hardened residues
and rotting leftovers;
and on the foremost tree
to welcome luck, grabbing it,
not letting it slip by fingers.
Your minimalist interior will look
like a garden of flattened rose petals,
chimes made of paper.
Deprived of sound and smell,
we shall guard over a possible surplus
of lust mistaken
as loves, of fine breaths thought of
as moans for abundance,
of coincidences labeled as
convoys to a destiny foretold.
No way do we humble you who
open this home to entities
to fill your hunger.
If we were edible,
I'd let myself be gorged.
Aloy Polintan

The day of consistent radiance stays
the same, trajectory of heat goes
from the sky to the skin, leaves of some
elegiac vividness rendered of

light and immensity. Electric
posts form a labyrinth: nirvana
that is unreachable. That cannot
be pursued by a worm's eyeview. That

can only be grasped by sagged palms and
bleached mustache, tasted by a stiff and
dead tongue. That is not the question, dear
Dionysus, you just let it go.

Hearing it from the grapevine, the end
must be near, despite the immortal
monarchy of the sun. Twigs will crack,
the pond will freeze like a station. An

avenue: drunk lovers, ecstatic
sages will allow circulations
to cease. A platform where binaries
will find equal footing with every

irregularity, temperature
and affection. Of fertility
and the fact of life and living. Lord
Tennyson, having written two poems

of thematic opposition is
a transgression. Come the swift future,
a bullet will produce an offspring,
shooting each other until the most

blood-resistant one remains and reigns.
The thing will no longer need Chekhov's
gun, to prove that equalities go
beyond reach. The world only requires

outcomes, be they reciprocations,
mists, pinballs and they suffice for a
communal desire. Poetry, shall
we succumb to death before dying? 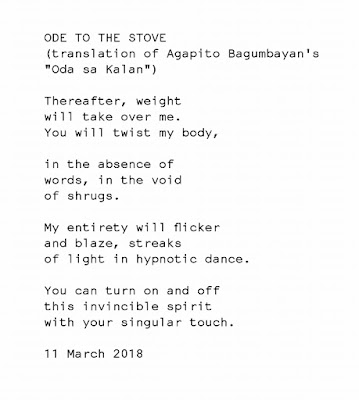 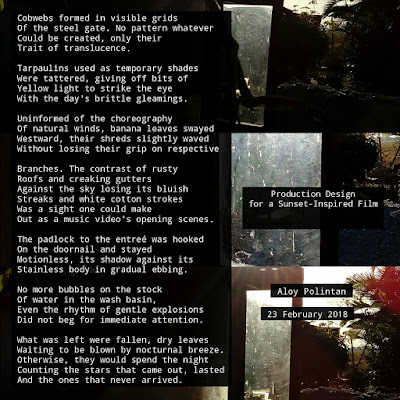 Where glistening skin is the norm,
this dominion of tattooed, half-drunk men
is where folks celebrate Good Friday.

Solicited drownings, wavelets far from
choreographed, liters of soda splashed
in foams cueing to festive grunts:
these are common spectacles, needless
to turn into figurative language.

The sun's out, the Lord must be above,
witnessing this trance back to barbarism.
Syncopated moans of worship translate
into jukebox liberties. Palm fronds
kindling bonfires transform into fans
extending the barbecue smoke.
Bodies of amulets fuse heat and
civilization to create a breed of nipples
rigidly pointing to the heart's desire.

And that is new baptism, perhaps
not from inherited violations of the flesh,
but from the monotony of faces.
They might want to escape
from the household of illogical cautions,
they might want proximity to the world.

The priest should notice this
anticipated scarcity. A change of plan
is necessary. Incense is not enough.
The council should sprinkle chlorine
on the cornice, dip the sacramental wafer
in Worcestershire sauce, or order lectors
to bare their varnished skin.

This idea would bring back the faithful
to the faith, where the Savior's glistening
skin is the norm of remembering,
where ministers flex their muscles
whenever the Body is offered,
where folks would say "Amen" instead
of choral whistling to thespian drowning.

Since 2016, Aloysiusi Polintan has worked as a Senior High School Principal in Divina Pastora College. He started scribbling poems and essays when he was 17 years old. These poems are still kept in a notebook and wait to be revised for future publication. This notebook will be revived and will give birth to language already "lived." That is why his blog is named "Renaissance of a Notebook," a blog of poems, personal and academic essays, and flash movie reviews. His book reviews, which are published and featured in The Halo-Halo Review and Galatea Resurrects, are also to be found on the blog, under the series title "Mesmerized." He believes tha the ability to judge or critique a literary piece starts with the reader's being moved and mesmerized by the artful arrangement of words articulating some longing for freedom and individuality. He's now working on a manuscript of 50 poems, with a working title of Brittle Sounds. He's 24 years old, living in Nueva Ecija.