THE SPIRIT OF THE STAIRCASE, poems by TIANA NOBILE with paintings by BRIGID CONROY 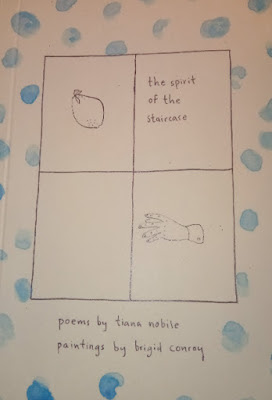 When I visited the Asian American Workshop Center's table at AAWP Tampa 2018, I was greeted by a bubbly young Korean-American woman who entertained all my weird questions.  I introduced myself to her and asked if she had a book for sale here and she lit up and presented me "the spirit of staircase" as shown above which, upon first blush, appeared to me like a graphic novel when I started flipping through it.

But what caught my attention (as I'm sure it did for many people) was the brazen index of poems:

I.  Is it true Asian pussies are sideways?

II. Go back to China!

V.  Where are you really from?

VI.  I've never had an Asian before.

These titles coupled with Brigid Conroy's paintings, which are light and whimsical, takes the edge off the political stance those titles evoke. 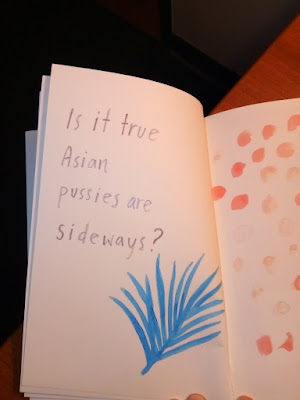 But upon deeper inspection of Nobile's poems, she seems to respond to those ridiculous questions and statements that culturally insensitive people, particularly men, have posed at some point to the "otherness" of the Asian diaspora.

They imply the notion of fetishism of the exotic, the notion that there is the ultimate sexual wherewithal and images of the uninhibited Asian women who, my own white step-father has told to me once, said Filipino women are not sexually repressed as white American women. That has always stayed with me.  Really?  We like to watch porn as the vixen with long black hair and slanted eyes?  This is what we are noted for?  Certainly we love to dance for the white GIs, a vision I grew up as a military child, watching fathers visit the Filipino brothels outside the gates of the military gates of former Clark Air Force Base.  Yes, that's what we live for.

Tiana Nobile is a millennial who has addressed the misnomers and stereotypes that have plagued Asian and Asian American women for so long and is still being astoundingly perpetuated.

Interspersed between these profound poems are poems that reflect the feeling of being invisible as well particularly when she wrote: 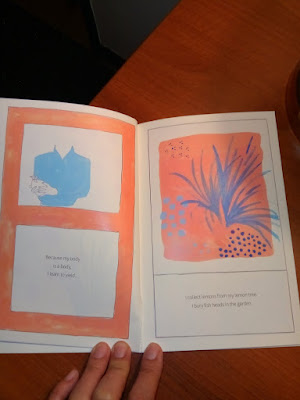 Nobile and Conroy have collaborated to create an exquisitely profound collection.  An embodiment of poignant responses to classic stereotypes.  A must read.

*****
Cristina Querrer was born in the Philippines and grew up as a US Air Force military child. Querrer is also a U.S. Army veteran who has earned her MFA from National University. Having been raised in the Philippines, Querrer has also lived in Connecticut for many years before moving to Tampa Bay, Florida where she continues to write and create. She is at the author of one chapbook, The Art of Exporting from dancing girl press, and an upcoming full-length poetry collection, By Astrolabes & Constellations from Agave Press.