"THE CURSE OF AKKAD" 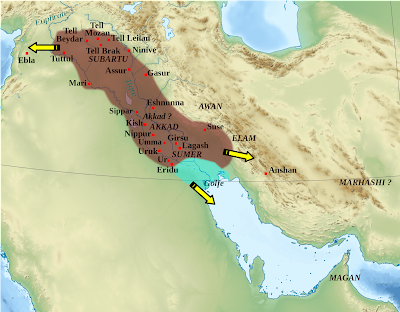 “The Curse of Akkad”

For the first time since cities were built and founded, / The great agricultural tracts produced no grain, / The inundated tracts produced no fish, / The irrigated orchards produced neither syrup nor wine, / The gathered clouds did not rain, the masgurum did not grow. / At that time, one shekel’s worth of oil was only one-half quart, / One shekel’s worth of grain was only one-half quart… / These sold at such prices in the markets of all the cities! / He who slept on the roof, died on the roof, / He who slept in the house, had no burial, / People were flailing at themselves from hunger.

“The Curse of Akkad” details the fall of the world’s first empire. A century before the poem was written, however, an imperial political structure was in place, and society was thriving. Its center lay south of modern day Baghdad, and its rule extended to northeastern Syria, where the Khabur River meets the Euphrates, supposedly the most fertile land in northern Mesopotamia. But by 2200 BCE, based on archaeological evidence, the empire had collapsed, and its settlements completely abandoned.

Around the same time, in Old Kingdom Egypt, political and economic structures were fragmenting, characterized by dynastic instability, civil wars, dispossession, and the absence of a centralized government. Interestingly, it was also around this time that the Nile exhibited signs of decline—such as changes in water chemistry, which caused widespread famine, and dislocation, and may have greatly contributed to the systemic failure and the eventual dissolution of the Old Kingdom.

Analyzing climate data, paleoclimatologists have deduced that the collapse of these civilizations coincided with reduced rainfall, severe droughts, and decreased agricultural yield. Abrupt climate shifts also impacted other civilizations, such as the Harappan civilization in South Asia around 1900 BCE, the Moche civilization in northern Peru around 700 CE, the Tiwanaku civilization in the Andes around 1100 CE, the Mongol empire in the late 1200s, and in the 1500s, the English colony on Roanoke Island.

The mighty Roman empire at its peak ruled three continents and 75 million people. This period coincided with the “Roman Warm Period” when climate was most favorable and most stable, as recorded in tree rings. But by the 6th century, it was clear that Rome was falling. The period was marked by climate variability (such as major volcanic eruptions followed by colder temperatures),
plague pandemics, political turmoil, invasions, economic dislocation, migration, and a declining population.

Stalagmite and sediment records from the 9th century show protracted dry periods in the Lesser Antilles to as far as southern France, and in Mesoamerica and Asia. So severe was the drought at the time that data strongly suggests it contributed to the fall of the Tang Dynasty as well as the collapse of the Mayan civilization.

As the American Century draws to a close (i.e., analyses by the National Intelligence Council in Global Trends point to [the unprecedented] “transfer of global wealth and economic power from the West to the East”), here’s where we’re at: the building of the Dakota access and Keystone XL oil pipelines were permitted, streams are reopened to mining waste, water protection is rescinded, plans to reduce CO2 emissions from power plants are dismantled, the Interior Department and the EPA’s Climate Change websites have been deleted, the EPA’s science advisors were dismissed, federal protection of whales from fishing nets was removed, the Climate Advisory Panel has been disbanded, and regulations on toxic air pollution loosened, among other things. We have also opted to withdraw from the Paris Climate Accord, “the world’s first comprehensive climate agreement.” Scientific evidence and current trends, meanwhile, unequivocally indicate that the world’s climate is changing—global temperatures and sea levels are rising and the oceans are warming. And the sky really is falling.

Empires are fragile things. Archaeological evidence suggests that a three century drought may have caused the collapse of Mesopotamian settlements. In the end, all that is left of the world’s first empire is a mound—specifically, three feet of wind-blown sand, and fragments: a bronze head, a stone slab, the lower part of a copper statue, cylinder seals. And a poem, exactly 281 lines long.

C. Sophia Ibardaloza is an artist and writer based in the San Francisco Bay Area. She is the illustrator and co-author of the poetry collection, BLUE. Her most recent work, ANNE WITH AN E & ME, was published by Paloma Press in January 2018.