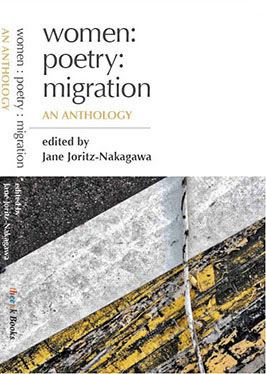 This anthology presents poems of 50 women writing, as Jane Joritz-Nakagawa says in her introduction, “innovative/experimental/avant-garde/adventurous” poetry, who live lives displaced from their origin. That is the premise. By collecting this work by that set of criteria and no other, Joritz-Nakagawa, an American living in Japan, has created a wide-ranging and generous survey of contemporary poetics, granting each poet after her poems a space for a short essay about her process or poetics or whatever seems germane. Rather than the criteria for inclusion limiting the result, it liberates it to include many more forms/techniques/attitudes/poetics than most anthologies.

Many of these poets are also displaced from the language[s] of their childhood, writing in perhaps that first (or more) language(s) or perhaps in the language of the place in which they find themselves or perhaps others although mostly in English (but not all). Many of the essays look at this double-or-more-ness of language.

The poets here include the famous (well, famous in the small world of contemporary poetry) and the less famous, all of which is irrelevant to the sheer quality of the work here. There isn’t enough room to write about the work of all 50 poets, but here is a taste to give a sense of the range.

Ivy Alvarez born in the Philipines, who has lived mostly in Australia and New Zealand, writes of Brazil and the bromeliad Queen of the Andes and other plants and this poem short enough to present here:

Jody Pou writes long paragraphs in Franglish (French, English, combinations, e.g., “Wittgenstein made a lion parler” mostly centered on Alexander the Great but for stretches centered on movies and cities and Roman emperors and etc. all going into her dual-lingualed pot.

M. Nourbe Se Philip gives us a list of wars, (e.g., Korean War) where “War” is crossed out and the word “Poem(s)” (in script) substituted, followed by the length of the war (e.g., 65 years for the Korean war — it is still not officially ended) where the word “years” is cross out and a script phrase substituted (“breaths needed to recite poem” for the Korean war). A long list, not arranged chronologically or alphabetically or by length of the particular war, going back very far (Greco-Persian) and reaching to the present (Syrian Civil). A list to break your heart.

And on and on. As Joritz-Nakagawa writes in the introduction: “I don’t think there is one premise.” Angela Carr writes in her essay, “I am interested in the possibility of bilocation.” Anne Tardos writes, “I adapted, by necessity, to each new language and consequently to each culture, and became aware of the relation between language and thought, and between language and non-linguistic behavior.” Éireann Lorsung writes, “I forget that space/time is not permeable. I lose my sense of what ‘here’ is.” From Cecilia Vicuña’s essay (notes for a 2008 performance at the American Museum of Natural History in New York, in Spanish): “La lengua es una forma iluminada;” her essay ends with a quote from C.D. Wright, “Even the humble word brush gives off a scratch of light."

women: poetry: migration [an anthology] is an incredibly rich volume. Writing this review I want to tell you about this poet and that poet and this other poet and… but there are 50 of them and instead of reading what I have to say about them you should read them directly. You should see for yourself how their works necessarily and completely by happenstance illuminate each other. You should construct courses around this book — why not? — dealing as it does with exile and displacement and the boundaries of language and of course gender. In other words, you should buy this book. Seriously.