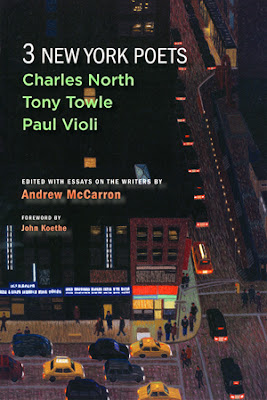 In his Foreword, John Koethe describes this book as a “psychological, biographical and literary study”—which arose out of a dissertation for which McCarron received a doctorate in psychology from the Graduate Center of the City University of New York in 2010. It details the work of three poets associated with the so-called New York School of Poetry, each of whom has received a decent amount of recognition but deserves to be more widely known. Koethe makes the point that, as with the first generation of the New York School of Poetry, it is their personal and historic connections that draw them together rather than any particular shared view of poetics given that their work is hard to characterize and delineate in terms of its content and common purpose.

McCarron, in his informative introduction, explains how he drew upon sources for his work (no major biographical work had been undertaken in this area at the time), his meetings with the three poets and the different circumstances in which they took place. Sadly, one year after he had defended his dissertation, one of the poets, Paul Violi, was taken ill quite suddenly and died of aggressive pancreatic cancer.

The book is structured in three parts of equal length. Each section contains a sample of the poets’ work followed by a biographical account of their life as told through a series of interviews and a literary study of their work.  I will cover each section in turn.

North’s work is represented by eleven poems written between the years 1974 and 2013 and include the long poem “Summer of Living Dangerously” (2007) which is written in the form of a diary that covers a period of forty-five days in 2001.

Documenting North’s Jewish-American parentage, Russian on both sides, McCarron traces the influence that came largely from his mother’s side on North’s early life.

North speaks with warmth and appreciation of his mother’s musical influence but candidly alludes to the fact that his feelings towards his parents are complicated and that he is surprised by just how much of his childhood he has blotted out over the years.

McCarron covers all the major turning points of North’s life: his decision not to pursue a career in music or law, his meeting with his future wife, Paula, his incursions into academia, graduation and marriage. Returning to New York in 1965, after a short period abroad, McCarron details how North was getting closer to finding his true vocation. It was John Unterecker, himself a poet, who suggested that North attend the New School poetry workshop being taught by Kenneth Koch. After some hesitation, North finally enrolled in the fall of 1966 and the rest, as they say, is history.

I kept putting it off – probably out of sheer insecurity – but finally did enrol in Kenneth’s poetry workshop, and it turned out to be the last time that he taught there.

McCarron charts North’s breakthrough which came in the spring of 1970 when he attended a poetry workshop offered by Tony Towle at the Poetry Project.  Towle encouraged North in his poetic endeavours and North credits Towle for his enthusiasm and intelligence. It was here that he also met Paul Violi. The three became lifelong friends.

In a separate section, McCarron recounts North’s association with James Schuyler. It was not long before North’s admiration for Schuyler’s work was to be reciprocated, much to his delight. Of North, Schuyler wrote “His joy in words, and the things words adumbrate, is infectious: we catch a contagion of enlightenment. To me, he is the most stimulating poet of his generation.”

Literary recognition on a greater scale, always a difficult thing to achieve, came to North late on in his career. In some ways, he was a victim of the poetry world’s “false reputations” (a phrase possibly picked up from Koch) in which recognition is based on factors that have little to do with merit. Regrets aside, North admits that life has been good to him. Marriage to Paula and the successful upbringing of their two children has clearly been a great source of pleasure, inspiration and pride.

In the section on North’s work, we get an insight into his method of composition – I don’t write slowly but I finish slowly – his interest in the poetics of form with specific reference to his famous line-up poems and an explanation about the long poem “Building Sixteens.” McCarron makes the point that the non-confessional nature of North’s work can be explained in part by his reserve and the fact that he is more interested in how a poem works rather than what a poem is about. Reference is made to the way in which music plays a part in his poetry, in particular, the clarinet. In summary, McCarron considers that North’s work is “an important tributary of American poetry, and specifically New York School poetry, because it expands the possibilities of what a poem can be, while simultaneously falling within the continuum of the American lyrical tradition.”

How much do we, as poets, reveal about ourselves in our writing is an interesting question. Tony Towle’s poems are described in this book as being autobiographical even though he has  himself said that poetry for him, was, if not outside of life exactly, only coincidentally autobiographical. McCarron includes Towle’s long poem Autobiography (1970-1973) among the selection of 12 poems written between the years 1963 and 2009 as an example of his work.

McCarron maps the difficulties Towle faced early on in life—his mother died of cancer relatively young, Towle was separated from his brother and two sisters who were put into foster care and he had a strained relationship with his father who was ill-equipped to raise a family after the death of his spouse. Towle’s struggle with borderline poverty as a young man in New York City is touched upon together with his struggles with failed relationships, marriage and fatherhood and the uncertainty of finding any form of permanent employment until he found work at Universal Limited Art Editions (ULAE), a fine art print publisher established in 1957 by Tatyana Grosman, which Towle describes as being at the forefront of the American print renaissance of the 60s and 70s. Towle carved out a niche for himself at ULAE where he found it inspiring to be around important artists in their working environment. Although his full-time association with ULAE was over by the middle of 1979 he remained involved in some of its activities, working on a part-time basis until 1981.

What comes across in this section is the way in which, despite the difficulties that he faced in his personal life, poetry was the one constant that kept him going. McCarron writes of Towle’s appreciation of O’Hara’s work, his regular meetings with Charles North and Paul Violi, the appreciation of his peers for his own writing at the St. Mark’s Poetry Project and his long-lasting social relationships with artist friends and colleagues including Ted Berrigan, David Shapiro, John Ashbery, Kenneth Koch, James Schuyler and, most importantly, Frank O’Hara. His girlfriend, Diane, according to Towle, saved his emotional life and gave him stability in his later years.

In discussing Towle’s work, McCarron observes how many of the poems feature mythological and historical figures on difficult life journeys that to some extent mirror his own questing spirit and the illumination of self-knowledge.  Towle’s meticulous attention to detail, in particular, the way in which he places his work in terms of years, dates and seasons, is highlighted. All his poems are carefully dated together with many of the events that are described within them. The heart of New York City “saturates” his poems which have “the fast-paced feel of city traffic: images, perspectives, and tones shifting like street scenery from the backseat of a yellow cab.” His life work is “the portrait of a man searching for the still center of a turning world.”

Nine poems dating from 1973 to 2011 are included in the selection representing the work of Paul Violi chief among which are excerpts from the sequence Further I.D.’s—a contemporary take, perhaps, on the Anglo-Saxon Riddles prompting the question Who am I? at the end of each sequence. The inclusion of poems such as Index and Wet Bread and Roasted Pearls illustrate Violi’s flare for quirkiness and originality.

Reading about Violi’s early life, his steady upbringing within a loving, supportive and cohesive family, one cannot help but draw comparison with the contrasting situation appertaining to Tony Towle. Violi’s parents encouraged his early interest in poetry and placed a good deal of importance on his education. Violi studied English and Art History at Boston University from 1962 to 1966.  McCarron mentions how the great satirists—Pope, Swift, Dryden, Voltaire, etc.—played a crucial role at this time in shaping where Violi’s literary leanings would lie. He charts his love of sports and everything to do with the outdoor life, his time in the Peace Corps which included a seven month assignment as a surveyor and mapmaker in Nigeria, much of which is documented in the form of impressions in his book-length poem Harmatan, followed by a period of travel to France, Greece, Turkey, Iran and Nepal. On his return to America, he shared the disenchantment of many of his fellow citizens over Vietnam.

Following his marriage in 1969 and subsequent fatherhood, McCarron documents Violi’s foray into the downtown poetry scene, his meetings with Kenneth Koch, Tony Towle and Charles North; his life in the Hudson Valley where he and his wife raised their two children, his periods of employment working as a journalist at The Herald and then as the managing editor of Architectural Forum followed by his entrance into teaching—a place where he found his true vocation teaching literature seminars for the English Department at Columbia University which included courses on Satire, Modern American Poetry and early twentieth-century British poetry. After his untimely death, there was an outpouring of affection from all who knew him. McCarron sums his character up by stating that he was “a family man and an epic socializer, a gregarious worker and a reclusive writer, a great humourist and a quiet dreamer.”

In discussing his work, McCarron observes how Violi found his lasting literary heroes in the satirists of the early 18th and 19th centuries and the early modernists. He places particular emphasis on the fact that humour and absurdity are defining features of his work. He turned the raw material of everyday life into poetry that was accessible and appealing to audiences everywhere.

This is an inspiring book about three very different poets who became close friends. It is also an excellent introduction to their life and work and will be a welcome addition for anyone who has an interest in the poetry of the New York School.