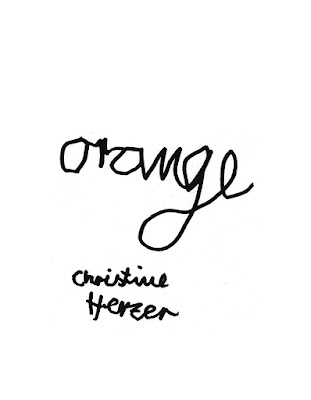 Yes I know it’s quite obvious by now, this association of Drumpf with orange. Yet I could not avoid him hovering in my reading space of Christine Herzer’s chapbook, Orange. I don’t know if his presence is appropriate or not … but I’ll just allow it. After all, reading is subjective.  And perhaps it’s not inappropriate to let the President’s presence invade this reading space. For the chapbook description says “Orange is concerned with space-making.” And space is never pure. If it ever was a vacuum, something inevitably rushes in. Like even this current President. (There is light in the adjective “current,” yes? For being inherently temporary? Anyway…) Anyway, none of this prevents me from seeing-feeling the charisma of Herzer’s white space, e.g. 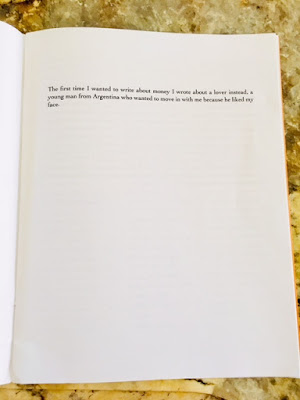 Drumpf’s presence—even though I deliberately misspell his name—does not prevent me from appreciating her poetry’s multidimensionality, e.g.

The President known as—mocked as—orange sours the reading experience of something entitled Orange and yet this sourness does not prevent me from being intrigued, at times charmed, by the poet’s meditations on the refrigerator, both on its intrinsic qualities (e.g. “Nutella is wasted inside a fridge”) and as a metaphor for a poet as a container (I guess that’s a double-metaphor? How smart.).

And when I read Herzer’s smart dissection of the many implications of money—e.g. this odious one

In the case of the rape of a 15-year-old girl, the court awarded the rapist a reduced prison sentence on the grounds that he was his family’s only wage earner

—well of course one can’t think of His Odiousness who’s so propelled by money.

…Which is also all to say, Drumpf’s presence does not prevent me from appreciating Herzer’s Orange for its own sake as presented in this engaging publication—such speaks to the effectiveness and lucidity of the work. I also find some rationale for bringing in his matter into this reading experience from Herzer’s orange-printed line, “People who don’t care about what is invisible make me want to die.”

As such, Herzer offers proof for her back cover conclusion:

Thus, I find myself viewing this project with not just respect but affection. And gratitude—Thank you, Christine Herzer, for writing and sharing these words.