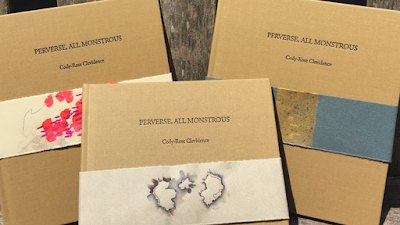 followed by (followed!?! by) the book’s epigraph, from Milton’s Paradise Lost:

“… Where all life dies, death lives, and Nature breeds,
Perverse, all mountrous, all prodigious things,
Abominable, unutterable, and worse…”

followed by a piece labeled [AGATE/ALGAE] with strings of dots arranged and thickening into letters, syllables, vertical and other lines, gradually cohering into clusters of words ending with

We are re-enacting evolution, pushing at the limits, using language in its farthest reaches, its richest speech

speak, rock. like a bad tongue, ugly in the mouth of the world.

because why not? Clevidence inhabits the body, their body, all bodies, their work (e.g., the earlier Beast Feast) intensely deeply physical; they inhabit language, lose themselves and us in language — who else w/could write “lapse and lithospheric strum in skin”? And on and on. Do I adore this book? Yes.

It is available from Nion Editions, founded by Jane Gregory, Lynn Hejinian, and Claire Marie Stancek. Perverse, All Montrous comes as a slender hardback wrapped with a small wrapper, a handmade piece of art by one of the press’ founders, the artist not identified.