WORDS ON EDGE by MICHAEL LEONG 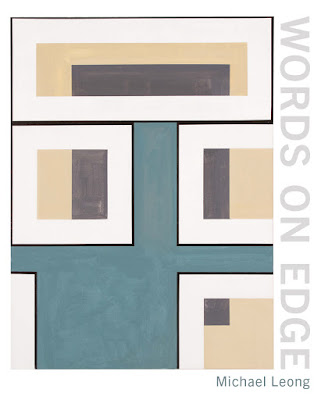 Music, say, from the book’s aptly titled first poem “Ignition Compendium” for starting with the bolstering

whose energy never abates through the entirety of this 2 1/3-page poem.

Humor, say, from the opening of—and I recognize humor is subjective and I assess this as one whose people was colonized by English—“Politics and the English Language (George Orwell Through the Looking Glass)”:

A not unblack dog was chasing a not unsmall rabbit
across a not ungreen field.

On the haphazard canvas of memories
fragments zigzagged into a dumb sort of
coherence, the shape of a life not your own

Throughout the collection, the internal nature of words is discernibly at the forefront—the diction is carefully smart and/or smartly careful so as to maintain a forward and rhythmic propulsion in the reading of it.

Such propulsion is admirable against the at times opaque façade presented by the poems. For instance, when Leong writes (in “Politics and the English Language (George Orwell Through the Looking Glass)”):

One cannot change all this schizophrenia in a moment,
just as one need not swallow
a seventeenth-century sphere full of mirrors and light.
For in real life it is always
the anvil that tricks the hammer by visualizing
unfashionable noises braying
against the bloodstained, incendiary air.

you’re caught up by the flow to nod in agreement and stop only when you think to think, “What am I agreeing with?” which is to say, “what did that poem just say?”

However, readers need not rely on (abstract) enchantment with the music (a music particularly showcased by the section “Fruits and Flowers and Animals and Seas and Lands Do Open”).  There are enough portents throughout the book—e.g.

He worked for Homestead Steel Works so that his daughter could be an adjunct in a department of modern languages and literatures and die in poverty after being let go after 25 years of teaching.
—from “(Be)labored Posterities

to show that the poet remains attentive to his environment/the external world (so that the dysfunctional state of affairs is addressed) and  not just mired in wordplay (pleasingly gallivanting though they may be).

The book’s title comes from a section “Words on Edge” as inspired by the Oulipo Compendium’s definition of “edges”:

“[E]dges are short texts each composed around a given word that is entirely represented by other words commonly associated with it. Neither the given word nor any extraneous words appear.”

Leong’s WORDS ON EDGE is, in fact, a testament to the freedom and freeing found when one operates within constraints.

Indeed, if the book itself operated along Oulipo’s concept of edges, one might say that WORDS ON EDGE very much reveals its times: a world on edge.

As to the particularities of significance of what are in the poems? Well, Leong also created a capacious enough space to allow readers a variety of interpretations and the promise that new reads will provide new meanings. Reading the book is a RECOMMENDED path if you appreciate music, humor, and wisdom.