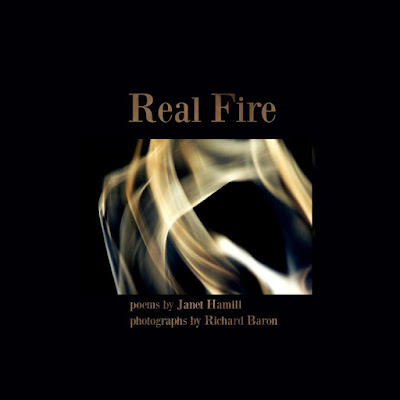 The short bio in the back of her new book, Real Fire states that Janet Hamill is a surrealist poet. I would say that she is more than that. To my mind I have always felt her to be one of the last great romantics, a metaphysical poet (a word echoed in the wonderful introduction by poet Maureen Owen) as well as a symbolist. Labels, if we must resort to them, that both she and surrealism embody. For without them there would be no surrealists. And they, being hopeless romantics themselves, might deny or embrace that fact.

Real Fire is a collaboration with photographer Richard Baron and both she and Baron express this romance with the beyond-physical with their respective mediums and the images/languages these mediums present.

But not to stray too far I will primarily concentrate on Hamill and once you own this precious flame you can benefit by its full intensity and warmth.

The prose piece “Fire Worshippers” is a kind of fable for grownups. “The fire first came to people when a piece of star broke off and fell to earth”, it proclaims. It then goes on to examine how with fire came increased knowledge and exploration of origins and ideas while expanding people’s intellects and curiosity thereby creating and altering pre-existing history and beginning a so-called “civilization.” At some point the bad guys arrive and try to destroy the fire-worshippers desires and their achievements. But why give away what comes after the bad guys are literally put to sleep. It is a tale of endurance and tradition with an important message.

In “PALMS OF WIND” “Each spark of fire is captivated by love”. That love along with all the other intense images, in what is a mere 10 line ode, twists and alters like fire itself. We find other poems where lines are repeated as if they were passageways into the fire we are so intently gazing at (“Gazing into the fire…the beginning holds the seeds of all that follows…”), which just as quickly morphs into other “seeds…”, “SPARKS” (“My happiness is trampled each time I catch a spark… Voice, breath, sweat, essence. Do they rise / and multiply…?), new thoughts, “WHITE SMOKE” where “everything disperses…burning words on paper…” then, FLAME (“freed of vanity nature ascends in radiance”), cinders, “SOLAR FOOTPRINTS” (“…seeing blessings take shape in shadows”), and “ASHES” (“A bundle weighing a thousand years…aromatic kindling waiting to ignite…coded letters on stars.”

And then there is “L’UNIVERS” for Rimbaud, “The equator has my neck in a noose. So get drunk! Be sloppy! God damn the stains on your shirt fronts.”

Hamill and Baron are tied together throughout the work the way fire and air are.
This book certainly does all that a collaboration can do and more allowing for the artist as individual aas well as collective voice.

This is not the first and I’m sure won’t be the last collaborative effort by Hamill, something she does to the optimum. Pick it up. Try not to burn your fingers as these poems and images burn deep into your soul. “Real fire is the central anthem.” So