I had second thoughts earlier, when I was in the bookshop, on whether or not I should get a copy of Simon Hanselmann’s Megahex. Finally decided, I went back to purchase a copy. It seemed quite an interesting addition to my variegated readings for later in the afternoon and towards evening. A reading list which I imagined (imagined – for at some point the attention span is bound to break, and did break) to include Jacques Roubaud and his interpolations in The Great Fire of London, the sonnet sequence in Geoffrey G O’Brien’s Experience in Groups, and Guy Davenport’s short story on the Lascaux cave paintings. (Maybe I should spend time to think about the activity of reading on some other day?) So I headed back to the shop and left some of my things -- a blue notebook, a 0.38pt black-blue pen, and Susan Howe’s That This -- with my friends K and A, at our table in the café. As I went out, I noticed that A flipped through pages of the Susan Howe.

When I got back, A said: “K and I were wondering how you would read this” 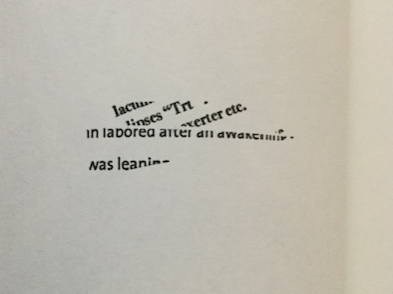 Half-jokingly, I made noises that contained L, T, W and several vowel sounds.

It is now late evening, and giving more thought to the occurrences earlier in the day, I note that I chose to give the Howe collage a sound. Several things led to my choosing to give it a sound – That This is a poetry book, the specific section with the collages is sandwiched between an essay chapter and a chapter of lineated verse, further, I was asked: how would you read this? But I also want to take note of illegibility, how certain collage works, such as Susan Howe’s, made of language-material, take place in the area between the legible and the illegible, and how illegibility is something that a work gains when the textual becomes visual. Thinking about illegibility in this particular sense makes more apparent the limitations of thinking about (i.e. reading) visual work using structures modeled after language.

But even poems that are obviously not visual poetry still carry with them various aspects of illegibility. If in visual poems the illegible aspect is introduced via the foregrounding of language’s graphic elements, in verse and prose poems this aspect seems to be made through sound – when expectations one may have of normative logic are unmet, or are differently met through a prosodic logic. “I placed a jar in Tennessee” writes Wallace Stevens “And round it was, upon a hill.   /It made the slovenly wilderness/ Surround that hill” and it is quite clear that Stevens placed the jar in Tennessee for Tennessee’s three syllables, its s followed by a long e sound, and for its particular distribution of stresses, as much for its hills and slovenly wilderness.

Or in an example from Lyn Hejinian, a prosodic and rhyming logic drives a semblance of a lyric I, so much that the didactic manner of saying which occurs in every third line, rather than being aphoristic, becomes a comedic slapstick made possible by rhyme:

“I thought I saw a rhubarb pie sitting on the stove
Then I saw it was the tide receding from a cove
But although I have strong emotions when I watch a movie, jealousy is never one of             them.

I thought I saw a bicyclist racing down the road
Then I saw it was a note, a message still in code
But sense is always either being raised to or lowered from the sky

(from Lyn Hejinian’s The Book of A Thousand Eyes)

Last night, I dreamt I was in a gathering of friends1. People2 were speaking with each other. I thought that they were simultaneously people and friends. In my mind in the dream, I knew them, but I was also aware that I didn’t know any of them in waking life3. Then I woke up, and realized that in all the gestures of hands, and laughter, all the talk and nodding of heads, I didn’t remember hearing any sound4, 5.

1.            “Reading shares this necessarily unsanctioned intimacy,” writes Lisa Robertson “I have the strong sense that reading chooses me, as have my friendships.”

"What was most striking about the demonstrations of the Chinese May [Tiananmen], in fact, was the relative absence of specific contents in their demands. (The notions of democracy and freedom are too generic to constitute a real goal of struggle, and the only concrete demand, the rehabilitation of Hu Yaobang, was promptly granted.) [...] In Tiananmen the state found itself facing something that could not and did not want to be represented, but that presented itself nonetheless as a community and as a common life (and regardless of whether those who were there in the square were actually aware of it.) The threat the state is not willing to come to terms with is precisely the fact that the unrepresentable should exist and form a community without either presuppositions or conditions of belonging (just like Cantor's inconsistent multiplicity). The whatever singularity -- this singularity that wants to take possession of belonging itself as well as of its own being-into-language, and that thus declines any identity and any condition of belonging -- is the new, nonsubjective, and socially inconsistent protagonist of the coming politics. Wherever these singularities peacefully manifest their being-in-common, there will be another Tiananmen and sooner or later, the tanks will appear again."

3.            The first section of That This is titled Disappearance Approach where Susan Howe writes about her husband’s, Peter Hare’s, death. Thinking about CS Peirce and the moment of her husband’s death, she writes:

““It could have been the instant of balance between silence, seeing, and saying; the moment before speech. [CS] Peirce would call this moment, secondness. Peter was returning to the common course of things – our world of signs.”

4.            John Cage enters an anechoic chamber and hears two sounds: the electric buzz of his nervous system, and the beating of his own heart.

Raymond de Borja is a writer and visual artist from the Philippines. His book of poems and collages, they day daze, is published by High Chair.