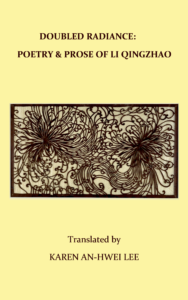 Li Qingzhao may be the most important woman poet in Chinese literary history, according to (blurber) Marilyn Chin: “Her stature is indisputable, and she deserves ample praise and recognition and to be in the same tier as that of the more famous male poets of the Tang and Song dynasties, which includes the likes of Li Bai, Wang Wei and Du Fu.” Chin’s praise raises a high standard … but she’s right. The poems in  DOUBLED RADIANCE, translated with much sensitivity by Karen An-Hwe Lee, reach across time to move the reader with their grace, luminosity, clear imagery, and a consistent atmosphere in which the reader—during the time spent reading a poem—is easily suspended. In short, the poems are timeless despite the specificities that locate the poems' narratives. For instance 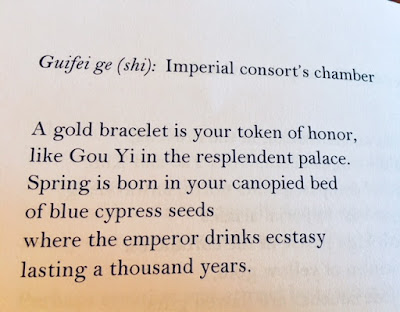 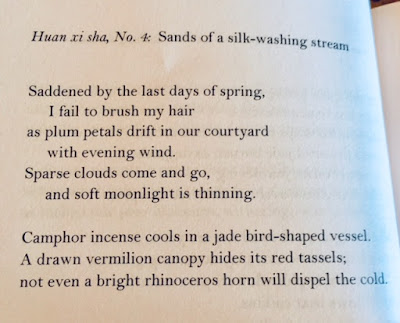 No doubt much of the pleasure the poems offer result from the clear presentation of the personal, all the more effective when the poems move towards more general elements that become doorways through which the reader enters to inhabit the poems: “a gold bracelet” moves towards “ecstasy / lasting a thousand years,” or “a drawn vermilion canopy hides its red tassles” moves to “the last days of spring,” or, in this poem below, “hair silvering at the temples” moves to “know[ing] the sight of plum flowers will soon be rare”: 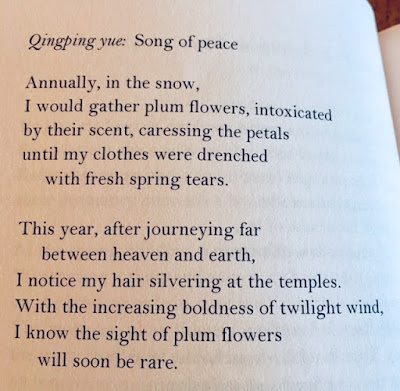 The poems speak eloquently on their own behalf. But befitting what seems to me to be a *recovery* aspect of the project—that is, to introduce and/or widen the readership for a poet who’s not received as much acclaim as she deserves—the book fortunately includes an elucidating Epilogue as well as Afterword—Li Qingzhao obviously was prescient as regards the fragility of her poetic legacy.  With an empathetic translator in Karen An-Hwei Lee, DOUBLED RADIANCE allows her legacy to live on a stronger footing. Here’s another evocative poem which surely, Dear Reader, you will find moving: 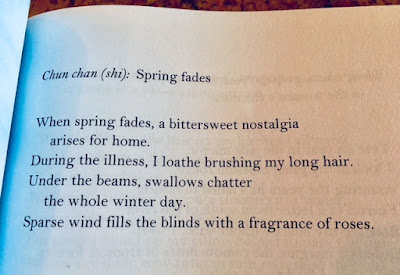